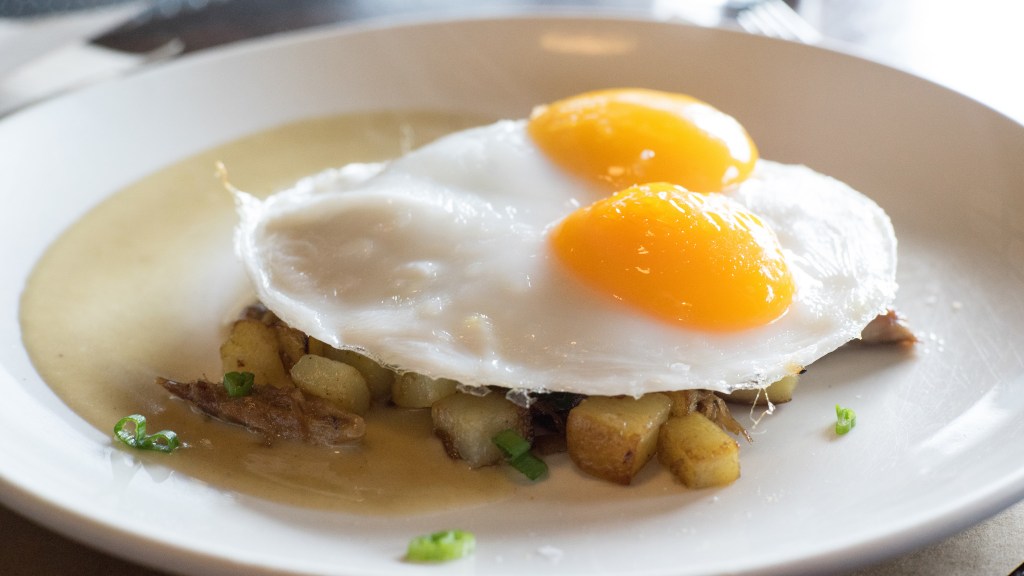 Invented by the British and turned into a full-blown occasion by Americans, brunch has become the best way to waste a perfectly good Sunday. Finding the right place to spend hours amongst friends, coffee, bloody marys, and eggs can elevate this midday ritual from good to great. So we’re in pursuit of the best brunches around, no matter where that journey takes us. This week, we venture to Chicago’s Logan Square neighborhood where, at Longman & Eagle,  it makes total sense to eat a breakfast of Duck Confit and hash with a can of PBR.

Chicago is undoubtedly an amazing food city, mastering cuisines both high and low. From humble, little hot dog stands dotting neighborhoods throughout the city, to haute cuisine meccas like Grant Achatz’s Alinea, the Windy City has everything. What many restaurants in the city are especially good at is eschewing pretension—without compromising on craft, creativity, and deliciousness. An exemplar of that approach is Longman & Eagle.

Opened back in 2010, Longman & Eagle is a throwback to a yesteryear of Chicago drinking, where inns served as places for people to eat, drink, and sleep. So you could pass the Windy City, grab dinner and whiskey at night, head upstairs to stay at one of the six rooms in the inn, and then head back down in the morning for a gastropub-inflected brunch. And while the setting may look a bit rugged, the food is on-point, earning a Michelin star for seven years running.

Raised in Alabama’s Gulf Coast, chef Joshua Mutchnick made a few stops around the country before landing in Chicago. Once in town, he worked in kitchens including North Pond and Graham Elliot Bistro, before coming to Longman & Eagle in 2016 to serve nose-to-tail fare. The plates are rooted in homespun classics, but with an upscale twist, like his wild board sloppy joe at dinner.

For brunch that means you can get a hash, but it’s topped with a duck egg and black truffle vinaigrette. Or there’s French Toast, but instead of maple syrup, there’s a cheesecake puree, macerated cherries, cherry jelly, and graham cracker brittle. And of course, there’s the PBR breakfast with two eggs, choice of bacon, housemade sausage, or housemade maple-glazed spam, served alongside a frosty can of Pabst Blue Ribbon. This is most definitely not a place for someone on a diet. You may gain 5 pounds just looking at the menu.

At a remove from the sleek interiors of Chicago’s tonier neighborhoods, Longman & Eagle shows it’s a little rough and ready the moment you’re about to walk into the restaurant beneath a rusty metal sign with just an ampersand cut into it. The vibe inside is dark and relaxed, with interiors ensconced in knotty wood and ragged brick. It’s an intimate spot that’s perfect for huddling on a cold Chicago morning with hearty food that will give you the warmth to protect you from the elements.