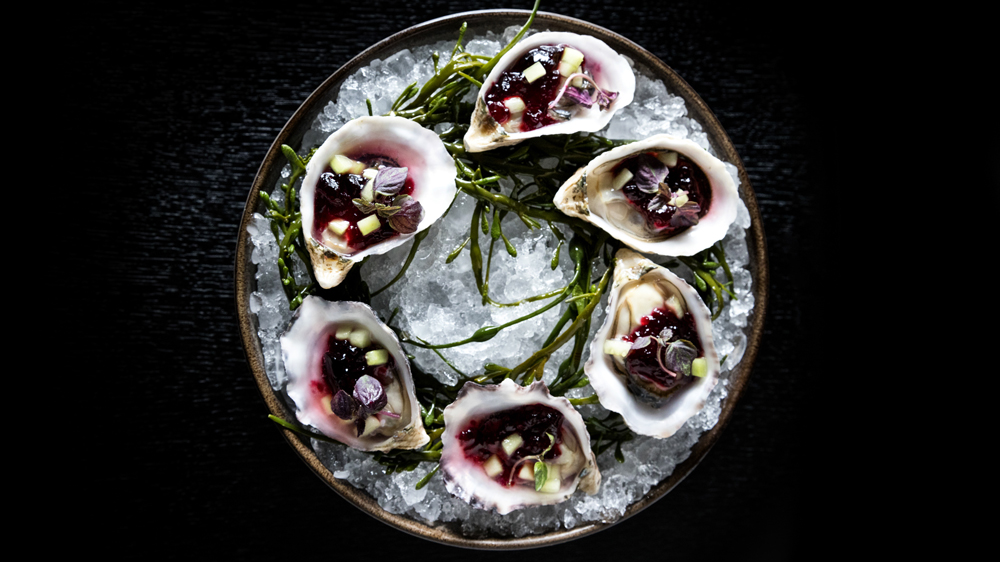 Sometimes, you can make an important statement about heritage and identity without fully understanding what the statement you’re trying to make even is.

“It’s confusing,” chef Brandon Kida says. “What is Japanese-American food? Why am I finding this so difficult to answer? Yes, I am Japanese-American and I want to represent that because it’s important at this moment in time to stand and say, ‘This is who I am.’ But don’t pigeonhole it.”

At his new Hollywood restaurant, Gunsmoke, Kida is focused on expanding the range of Japanese-American food. Part of it is about what he isn’t doing: There’s no sushi, noodles or even rice on the current menu. (“I don’t think Americans realize that becoming a sushi chef is not like taking a weekend class on how to do it,” Kida says. “It’s a lifelong pursuit.”) Instead, he merges the ideas of sashimi and salumi in an umami-packed plate of local tuna with country ham. To Kida, the combination of deeply savory elements represents the flavor profile of tamari, and the chewiness of the gnocco fritto that accompanies the tuna and country ham reminds him of eating rice.

Kida (a versatile chef who’s also known for his cooking at Hinoki & the Bird, Go Go Gyoza and Go Go Bird) is front-and-center in a movement of LA chefs who are here to show their city that Japanese food can and should mean a lot more than sushi. Kida’s making baguettes with rice flour and serving them with shiitake mushrooms in garlic parsley butter. It’s an inspired nod to escargot at a new-wave restaurant that’s all about reinvention.

Breaking bread is also a big part of meals at n/soto, the new izakaya from chefs Niki Nakayama and Carole Iida-Nakayama of Michelin two-starred n/naka. Nakayama and Iida-Nakayama both stress that they want to showcase true Japanese flavors with traditional skewers and sushi. But there’s also new ideas all over the menu, including carrot tartare, agedashi mochi and crudités served with mochi flatbread.

“Every other culture has a flatbread of some sort, and it seems to be a deep part of our human heritage to have flatbread,” Nakayama says. “The fact that Japanese cuisine doesn’t have one seemed odd to us. We want to introduce new flavor profiles or different cooking techniques that aren’t always necessarily a hundred percent Japanese.”

One goal is to encourage guests to share dishes, to avoid the rigidity of Japanese meals where everyone gets their own little serving of food over and over again.

“I think because n/soto started during Covid, it was really out of this desire to bring people together and have a sense of a team again and to work toward this common goal of creating a nice group experience for guests,” Iida-Nakayama says.

Given the challenges of recent years, one driving force of Japanese-American food in Los Angeles is simply the desire to try something new, something that breaks boundaries, something that’s fun. This is Japangelo food, driven by a city where restaurant guests crave meals that are simultaneously traditional and experimental.

It’s no coincidence that the chefs behind this Japanese-American movement have extensive fine-dining backgrounds. (Kida worked at LA’s L’Orangerie and cooked at Lutèce and became executive chef at Asiate in New York). These are chefs who have long been capable of cooking almost anything and are now deftly creating the food they personally feel compelled to serve.

Even some of LA’s most imaginative and delicious tasting menus are about reframing Japanese-American food. At Hansei, a pop-up at Little Tokyo’s Japanese American Cultural & Community Center, chef Chris Ono (whose experience includes Eleven Madison Park, Mori Sushi, Providence and Tokyo’s RyuGin) is inspired by old-school Japanese-American restaurants like LA’s Aki and Sakura as he reimagines teriyaki and California rolls. He’s also referencing old Japanese church cookbooks from the 1960s and 1970s that his mom kept.

“We put two layers of crystallized soy between the avocado and the sea urchin to kind of act like an adherent, like a glue,” Ono says.

The culinary tricks and technique at Hansei are impressive, but service is purposefully relaxed. Hansei’s food is prepared and presented at the counter by a two-person crew, with only chef Jimmy Sugishita (who cooked at Hayato) assisting Ono.

“It being more freestyle and not as refined is intentional,” Ono says. “I feel like the style of food and the service we’re doing is a more interactive thing. Also, I don’t have like 10 people on garde manger with tweezers.”

Japanese-American food reveals itself in all sorts of forms. Chef Hiroo Nagahara’s Silver Paper, which is at Sherman Oaks seafood market The Joint this month and will be at Hollywood’s Japan House in November, is a modern kaiseki pop-up that’s luxurious and over-the-top.

“If you’re going to use caviar, use caviar,” says Nagahara, who adds that he’s not worrying about food cost as he serves ultra-premium seafood and farmers-market ingredients.

“This is about flexing,” says Liwei Liao, the dry-aged fish guru who runs The Joint.

Silver Paper opens with drinkable caviar, what Nagahara calls “caviar boba milk tea.” Guests suck caviar submerged in matcha buttermilk through a straw. The Japanese-born Nagahara (who was chef de cuisine at Charlie Trotter’s Restaurant Charlie in Las Vegas and delved into top-tier Japanese food when he was at Tokyo restaurants like Kagurazaka Ishikawa) cures Tsar Nicoulai caviar in kombu to make it slightly thicker and more like boba.

For a show-stopping supplemental dish with king crab and Astrea Caviar, Nagahara combines a chawanmushi recipe with a crème brûlée recipe.

“I was thinking about how I love chawanmushi with caviar and I also like king crab,” he says. “Then I was just like, everybody fucking does that. There’s so many menus with that. It’s fucking boring.”

So he came up with a unique dish that gets sweetness from extremely ripe bananas and richness from a Champagne beurre blanc.

“It’s like you have this Japanese base, and then we also have the French influence, but then you also have this American influence of almost like a banana cream pie,” Nagahara says.

Nagahara enjoys taking humble food and making it high-end. The last savory course of Silver Paper is a donabe with rice coated in Wagyu onion marmalade and topped with dry-aged seafood that might be nodoguro one week and Ōra King Tyee salmon another week. This dish is a loving nod to how Nagahara’s mom always makes him rice balls when he’s visiting her. Is this comfort food? Of course. Does it work as fine dining? Of course.

As Kida also believes, the Japanese-American food movement in LA is about bringing together different reference points and seeing what kind of delicious things can happen when you cook without limits.

“Give it 20 years, we’re no longer going to have a Japanese-American label on this cuisine,” Kida says. “It’s just going to be American cuisine. That’s my goal.”