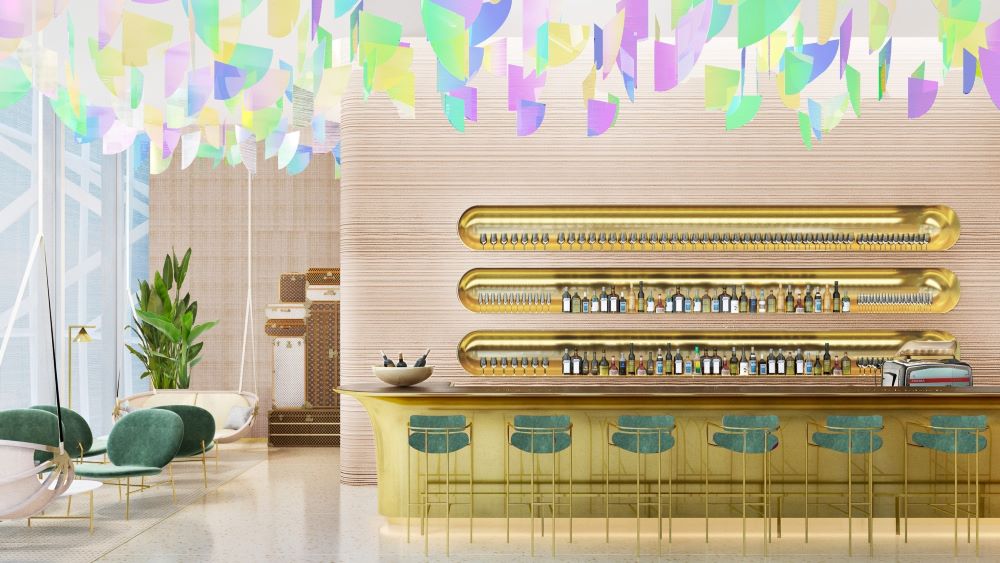 Louis Vuitton is switching monograms for munchies. The French fashion house has announced it will open its first-ever café and restaurant next month in the Osaka, Japan.

Le Café V will be located on the top floor of Louis Vuitton’s new four-level flagship in the ultra-hip, food-centric city, according to WWD. Helmed by acclaimed Japanese chef Yosuke Suga—who runs the pass at the highly coveted 20-seat restaurant Sugalabo in Tokyo—the café will be complemented by an expansive outdoor terrace and bar. A rendering of the space sees a muted palette of black and grey contrasted against pops of yellow and gold, which feels unequivocally LV.

If that’s not enough, next to the bar will be a second dining space, serving dinner exclusively to a lucky few. Sugalabo V will mirror chef Suga’s successful Tokyo restaurant but have that all-important luxury twist. The space boasts an elegant Art Deco aesthetic, with blush walls and gold accents. The long bar allows for a chef’s table setup where guests can watch the chef prepare their fare.

As for house’s signature touch, the famous LV monograms won’t be totally absent, but rather tastefully featured in the tableware. Tokujin Yoshioka, who designs for Louis Vuitton’s Objets Nomades of home and travel objects, has created a charger plate specifically inspired by the iconic insignia. The approach is a pointed contrast to the design of Fendi’s London café, which emblazoned the label’s Double F logo throughout the space.

The news of the new restaurant and café was confirmed by chairman and CEO of Louis Vuitton Michael Burke, who also teased that label may delve into more eateries and hotels in the future. This seems to align with LVMH’s strategy at large. Bernard Arnault’s billion-dollar luxury conglomerate (the parent company of Louis Vuitton) recently acquired Tiffany & Co. and the iconic American jeweler is set to open its very first Blue Box Café in Europe next month.

Louis Vuitton Maison Osaka Midosuji will occupy four levels in a new building by architect Jun Aoki and is set to open on February 1, while Le Café V will start serving customers on February 15. Just one more reason to finally book that vacation to Japan.