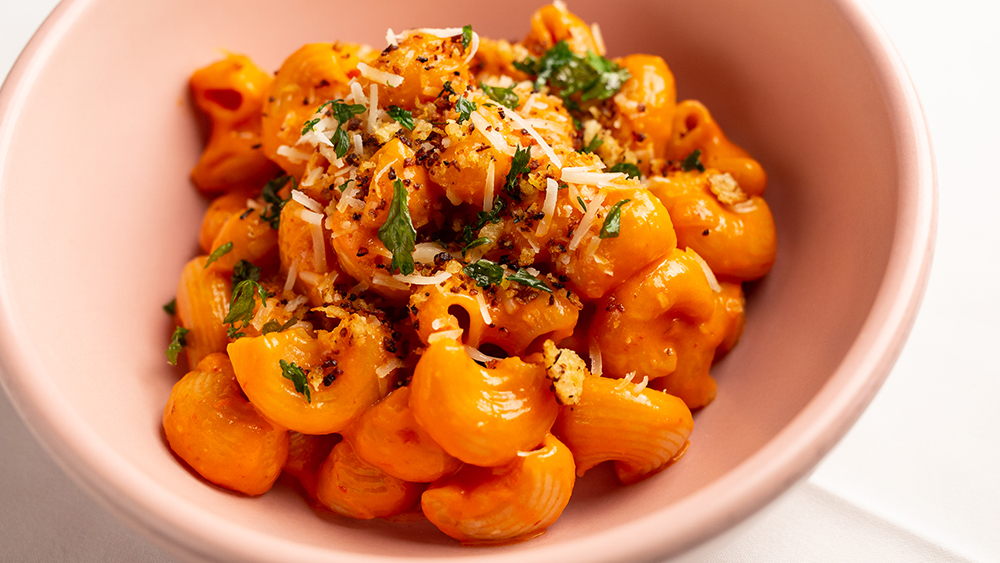 I’m not talking about escargot, by the way. I’m talking about lumache, the pasta shape that’s popping up at all sorts of spots, from more classic Italian restaurants to contemporary American ones, where only a handful of pastas might be served. Lumache, which originated in Italy’s Piedmont region, resembles a snail shell—in fact, it’s the Italian word for “snails”—with a short, curved, tubular shape, open in the middle. That allows whatever toppings or sauce accompany the pasta to get nestled in there, creating the perfect bite.

“It’s really playing to the sauce,” said Bari Musacchio, a partner at Nolita’s Rubirosa, which serves lumache with the aforementioned sausage ragu and vodka sauce. “Parts of the ragu go inside, so it creates a really fun texture in your mouth.”

In the history of pasta, specific shapes are unique to specific Italian towns, and those shapes are the most important factor in a dish, rather than the sauce, said Ryan Hardy, the chef-owner of Bar Pasquale, which serves a lumache with pistachios, pancetta and Pecorino Fiore Sardo. In America, though, we tend to focus more heavily on the sauce. Lumache, in some sense, is the best of both worlds: You can use it in dishes that are faithful to a certain region of Italy, but it still emphasizes the sauciness that American diners have come to love.

It’s also a pretty easy shape to make quickly, in large quantities, as a restaurant needs to be able to do. Several of the chefs I spoke with emphasized these facets of lumache in particular: Large volumes of the pasta can be produced fast; it’s hard to overcook; and it holds its al dente well. Those attributes mean it’s a slightly more forgiving shape than others, and it allows chefs to have more control of lumache dishes during a busy service.

Of course, these things have always been true of lumache. So why is it having a moment right now? In a sea of explanations, a few main theories have emerged. The first—and the most compelling—was the shape’s approachability. Lumache’s similarity to rigatoni means that it isn’t wholeheartedly weird or unfamiliar to diners. Rubirosa chose to cook with it for exactly that reason, Musacchio said, but “the lumache shape … it’s a little bit more elevated and uniquely Italian American to us.” While Rubirosa has served lumache for a while now, the restaurant is gearing up to launch its very first product line, and Musacchio said that lumache is the “crown jewel” of the entire spread, exactly because of that familiar, yet elevated, vibe.

At a time when many people are returning to restaurants after a couple of years away, that approachability plays an important part in the dining experience, too. Someone who got so used to curling up on the couch with a bowl of mac and cheese or spaghetti and meatballs realized that they liked that comfort, and they may be seeking it out at restaurants now. “We are in a moment of doubling down on recognizability and comfort, putting people at ease,” said Mike Anthony, the executive chef at Michelin-starred Gramercy Tavern, which serves the chorizo and squash lumache. That’s translating into more cozy, snail-shaped pasta for all of us.

Another reason lumache is so popular right now is the same reason behind most other trends: technology. By now, pasta-making technology has advanced so much that making lumache is way easier than it’s ever been. Hardy mentioned how extruders are much simpler to use, and how much cheaper they’ve become, meaning not only restaurants but home cooks can easily make their own lumache—and other pasta shapes—from scratch. “I’m really happy to see so many other restaurants that are pushing pastas and that are making these pastas,” Hardy said. “It’s great for the tradition, it’s great for the industry, it’s great for the diners.”

In the technology equation, you also have to factor in social media. Lumache is a shape that photographs well, said Ryan Schmidtberger, the executive chef at Hancock St, where the restaurant’s two lumache dishes are the best sellers. People make reservations because they see a beautiful, delicious dish from a certain spot on Instagram or TikTok, and so an attractive-looking pasta like lumache can go a long way toward a restaurant’s bottom line. That sometimes drives the decisions chefs make, although it’s certainly not the only thing they consider when dreaming up a new menu item.

So popular, it might just become the hottest pasta in America. Move over, bucatini.