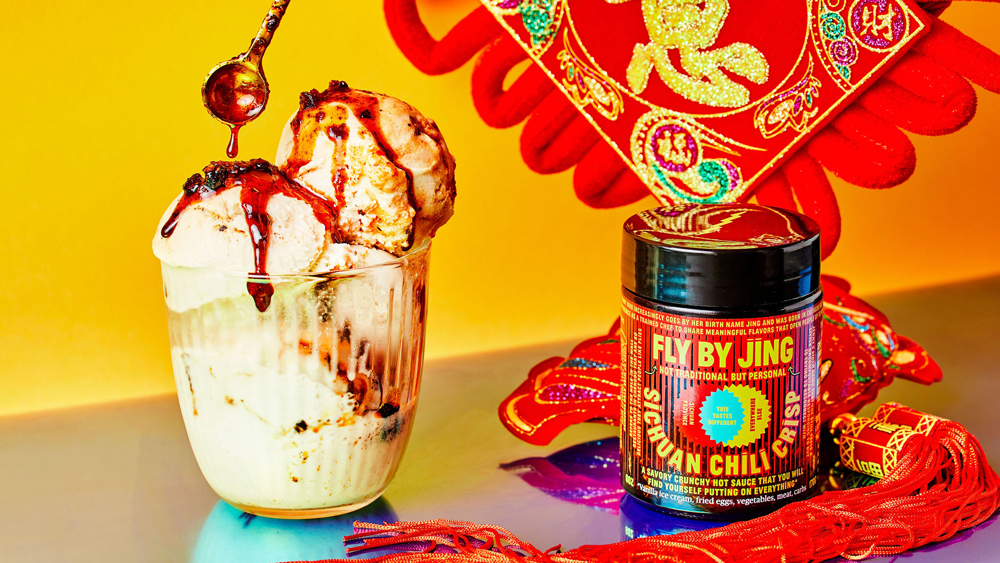 The Lunar New Year and a month filled with Year of The Tiger celebrations starts on February 1. And this year, it’s not going to be just dragons who are breathing fire.

Both la (spicy) and mala (numbing and spicy) are trending around the country, with hot spots like New York pioneer Szechuan Gourmet and LA mainstay Sichuan Impression continuing to lead the mala movement. Money over everything is so 10 years ago. Now it’s mala over everything.

And it’s gotten to the point where even what’s cold is hot and numbing.

At Dear Bella Creamery, a Hollywood scoop shop known for its plant-based ice cream, Taiwanese-American co-founders Alice Cherng and Belinda Wei have a Chinese New Year celebration kit (available in-store and also for nationwide shipping) that includes dan dan ice cream with Fly By Jing chili crisp. The nicely balanced, savory, lightly sweet, spicy and numbing ice cream is a collaboration with Fly By Jing’s Jing Gao, a Los Angeles entrepreneur whose chili crisp is available at Target stores around the country. To make the umami-rich dan dan ice cream, Cherng and Wei took their existing peanut butter base and added soy sauce, vinegar, gluten-free hoisin and aromatics along with the chili crisp.

“It’s just a piece of what our upbringing is,” Wei says. “It’s a way to use ice cream as a vessel to really offer that to the public. I think we have a really unique platform because we also are plant-based and offer gluten-free items. It’s a way for people who are already interested in exploring something different to experience a piece of our heritage.”

Experiencing mala for the first time is pretty wild. As legendary New York food critic Robert Sietsema once eloquently said to me as we were slurping noodles in Flushing, Queens, mala is like your mouth is on LSD. Your face is numb, but somehow your taste buds and your senses are heightened. You feel nothing and everything at the same time. Tingle and ready to mingle is what I like to call this intoxicating and euphoric feeling.

“Mala is just a very attractive flavor on its own,” says Yao Zhao, founder of 50Hertz, which makes habit-forming Sichuan pepper oil. “There’s a third dimension: There’s aroma, there’s the taste and there’s the sensation. Both the numbing and hot spicy have addictive factors.”

Zhao, whose product line has been embraced by Sichuan-food expert Fuchsia Dunlop, sells both green pepper oil and red pepper oil. The red oil might be more familiar to those who’ve eaten Sichuan versions of dishes like mapo tofu or kung pao chicken, but the strikingly fragrant green oil is a revelation.

Zhao, who grew up in Chongqing, had his aha moment four years ago when he went back to China for Lunar New Year.

Yao Zhao is bringing the heat to Sichuan food and beyond.  Photo: courtesy 50Hertz

Zhao returned to the United States with some “run-of–the-mill Sichuan pepper oil.” One night, he was making dinner for some American friends.

“I added the oil to a Thomas Keller pasta recipe,” he says. “I think it had mushrooms and shallots and a lot of cream and a lot of Parmesan cheese. I just drizzled a little bit of the green Sichuan pepper oil, and it worked so well. My friends had never tasted anything like it before and they loved it. They said this thing could really go beyond Sichuan food. It dawned on me that this could go into international cuisine. That’s how I started the business.”

Zhao recommends using his Sichuan pepper oils, which are made with rapeseed oil instead of highly processed canola oil, as a condiment. The green goes well with seafood and salads. The red is nice atop pizza, noodles and other carb-heavy foods.

Zhao, who launched 50Hertz in 2020 and says he sold 20,000 bottles of Sichuan pepper oil overnight after The New York Times praised his products, is part of a movement that has seen amped-up Asian flavors go mainstream in America. There’s LA chef Tony Nguyen’s Drip sauce, which merges Southeast Asian and Calabrian chiles with California heirloom garlic and some organic honey for a concoction that’s delicious over eggs, rice or spaghetti with meatballs. David Chang’s Momofuku has a line of chili crunch, including an extra spicy option for moments of face-melting frivolity. And both Nguyen and Chang have versions of their chili-packed condiments that include truffles. Fly By Jing has expanded its product line and now offers dumplings and hot-pot base. Zhao sells dried peppers along with his oil, and he’s working on 50Hertz snacking peanuts that he plans to release in a few months.

“The numbing peanuts are extremely good when you’re drinking beer or cocktails because the tingling numbing sensation intensifies the coolness,” he says. “It makes it feel colder in your mouth. I think the peanuts will make people in the States get to know this sensation better.”

So if you’re looking to cool your palate while you enjoy all this new hotness, Vervet sparkling craft cocktails (which are available for shipping to 39 states and also in buzzworthy AAPI-owned LA restaurants including Yangban Society, Chifa, Saikai Ramen Bar, Pine & Crane, Joy on York and the Brothers Sushi) are a perfect Lunar New Year pairing. Vervet co-founder and CEO Tuan Lee has Vietnamese and Korean roots, and Vervet’s canned cocktails are inspired by the diversity of Los Angeles, with influences including Filipino bartenders, tiki culture and, of course, the city’s bountiful farmers markets. Vervet just released its deeply refreshing Toyo sake cocktail, which is a collaboration with local brewer Sawtelle Sake and features the brightness and complexity of yuzu, kumquat and holy basil. But if more spice is what you want, Vervet’s Pale Mary with habanero peppers might turn you into something like a taco-loving dragon.

The point of all of this for creators like Cherng, Wei, Zhao and Lee is to proudly celebrate their heritage, to embrace the fact that they are Asian and also American, to show customers that wonderful things happen when you simultaneously respect the past and innovate. So Dear Bella’s plant-based Lunar New Year flavors also include black sesame and Taiwanese pineapple cake.

“That’s why we call it Taiwanese pineapple cake,” Cherng says. “It’s really important for us to story-tell through our ice cream. We have flyers talking about what dan dan is. We put it on our social media and on our website. We talk about our heritage. It’s definitely time for people to know more about our food and our culture.”