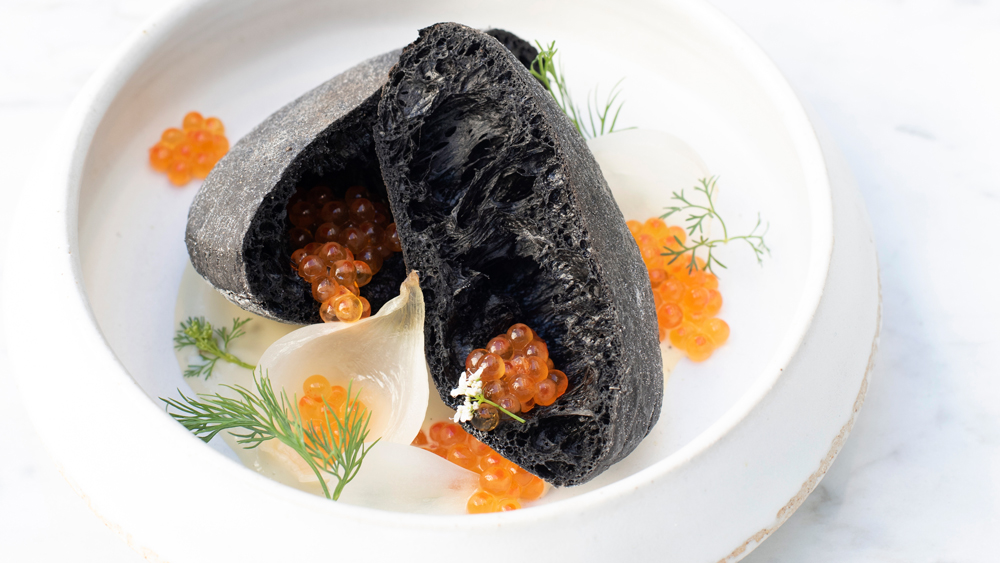 Venturing only a couple of hours away from home can feel as disorienting as waking up from a mid-morning nap. It’s surprising and confusing and nothing seems to be where you’d think it’d be.

That’s been San Francisco chef Melissa Perello’s experience opening a restaurant in Los Angeles so far—but without all of that resting. Perello is the chef and co-owner, with Robert Wright, of the Michelin-starred Frances and Octavia restaurants in San Francisco. She opened M.Georgina on Tuesday, her first foray into Los Angeles.

“We were presented with a really good opportunity, but were kind of on the fence about it for a long time,” she said. “But the more time we spent in Los Angeles, the more we noticed that the dining scene had evolved so much in just the past few years. And it felt really exciting and like a fun opportunity to get the chance to be a part of that growth.”

M.Georgina is starting out grown: It’s located inside a huge, 4,500-square-foot old factory that has soaring ceilings and floor-to-roof clerestory windows. The space is at ROW DTLA, a retail and restaurant complex near the Arts District downtown that also includes Smorgasburg (from Brooklyn) and soon, after the abrupt shuttering of Tartine Bianco (from San Francisco), Pizzeria Bianco (from Phoenix).

“They’ve done a really good job curating the space with great retail shops and restaurant options from across the country,” Perello said. “It’s in a little bit of a seedy area but you walk out of the parking structure and it’s like you’re in an oasis. It’s really well done and really beautiful and there’s lots of art all over. It feels very serene in the middle of a city environment.”

Perello named her new spot after her paternal grandmother, Mary Georgina. (Frances, which is celebrating its 10th anniversary next month, is named after Perello’s maternal grandmother; Octavia is named after the street it’s on.) It features elegant elements such as a two-sided exposed kitchen, hearth, wood-burning oven, patio seating and custom ceramics, created by Sarah Kersten Studio in Oakland.

And while the menu may reflect her San Francisco sensibilities now—market-to-table cuisine, seasonal California ingredients, quickly changing menu—she says it won’t for long.

“The concept is going to evolve into its own thing,” she said. “With Octavia, for instance, it was our spur off of Frances. We started with the blueprints of Frances, with the idea that it would be Frances 2.0—larger space, bigger menu—and it turned into its own being. By that point we had been five years in on Frances and I think my food had naturally evolved into something different.”

To her, the neighborhood and the staff push a restaurant where it needs to be. At M.Georgina, she’s already experimenting with new techniques and flavors, like fire and smoke. Besides, starting with what they’re familiar with has come with its own surprises.

“The L.A. food purveyors, vendors, farms and markets have been very exciting to work with,” she said. “But it’s been interesting to adjust to the difference. I’m really finding it surprising how different the markets are between the Bay Area and down here. It seems kind of silly, but there’s a really stark contrast between what I know is available at the markets in the Bay Area right now versus what we’re seeing here. And it’s not that either is better than the other, it’s just completely different. You just have to be really flexible and fluid.”

She thinks the difference can be attributed to what is marketable in L.A., historically. And, of course, the climate changes between those 400 miles. While she anticipated to find pears, apples, persimmons and chicory lettuces, those just are not widely available in L.A. yet. But late-summer fruit and vegetables such as tomatoes, eggplants and peppers are still hanging on.

The menu is short and concise, at around 25 items, which the chef prefers. An easy-to-read menu with lots of turnover encourages diners to visit more often, she says. The opening menu includes dishes such as chicory lettuce salad with spicy aged provolone, olives and broccoli rabe pesto; farro mafaldine with eggplant, tomato confit and house ricotta; grilled squid ink pita with trout roe, pickles and smoked oyster aioli; lamb sausage a la churrascaria with blistered chile peppers, mint and fennel; sourdough ice cream with cinnamon and salty croutons; and quince sherbet with caramel, cheddar and a rye crisp.

“Coming into a new market that we’re not a 100 percent familiar with, we’re just trying to be really approachable and do what we do best,” she said. “We’re going to roll with the punches and see what people are interested in and just be as valuable as possible.”

In the coming weeks, Perello will debut a chef’s tasting menu, which will be served family-style. Each course will include as many as six bites or dishes meant for sharing with the whole table; it gives diners the opportunity to try just about everything at the restaurant. Early next year, she will serve takeaway lunches in an adjacent space known as “The Slip.”