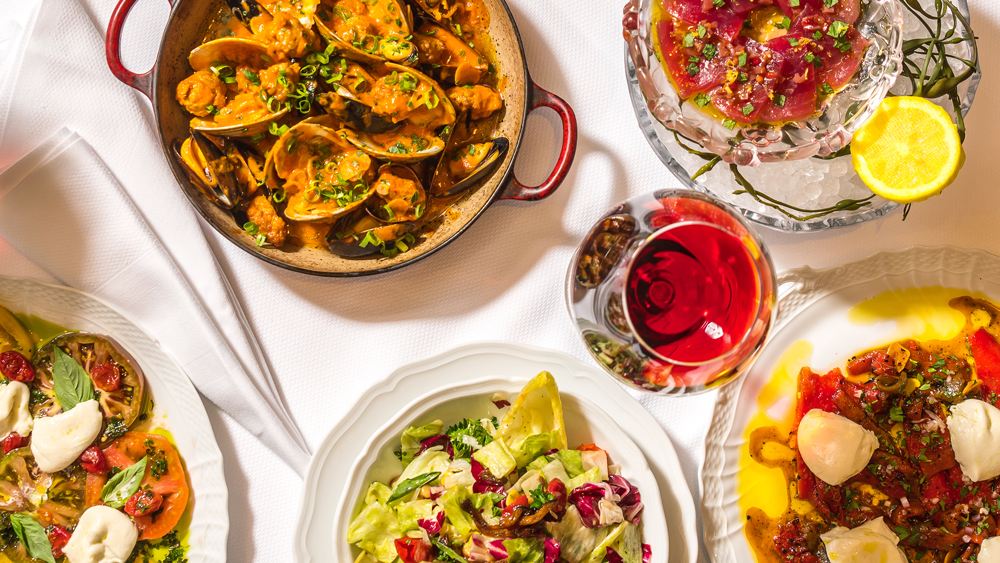 Major Food Group is launching invitation-only sales of founding memberships for its first New York City private club this week. As Robb Report previously reported, the forthcoming ZZ’s Club at Hudson Yards, which should debut in the winter, will be home to the world’s first private Carbone. And that’s just the beginning of the lavish dining and drinking options that Major Food Group’s Mario Carbone, Rich Torrisi and Jeff Zalaznick are creating at the members-only club.

“Lots of private clubs are opening in New York, but what really sets us apart is food and beverage,” Zalaznick says. “This Carbone at ZZ’s Club will not only be special because it’s private, but also because of all the grand gestures and special dishes that you’ll only be able to get at this unique location. It will have unique design touches, silverware, plateware, every single detail designed for this private club. And there are a lot of dishes that we would have loved to do at the original Carbone, but you just can’t do them at a fast-paced restaurant.”

This Carbone’s exclusive dishes might include langoustine pasta, whole veal osso buco and fettuccine Piedmontese that “will be a study in white truffles.” Zalaznick also mentions possibilities like whole porchetta and “super over-the-top” seafood risottos that are made to order. Why not take advantage of the fact that the kitchen space Major Food Group has at Hudson Yards is larger than the entire Greenwich Village space inhabited by the original Carbone?

“Being in a private club, we’re able to spread our wings and really unleash the full battery of culinary tricks and tactics we’ve always wanted under the Carbone umbrella,” Zalaznick says.

ZZ’s Club, designed by Ken Fulk and spanning three floors and close to 25,000 square feet, will also have a ZZ’s Japanese restaurant  and sushi bar, cocktail bars, a lounge, a boutique nightclub and an array of private dining experiences that include a dining room reserved for founding members.

It’s like having your own private chefs, but ones that have been trained by Major Food Group.

“You want us to make you a giant croquembouche, we’ll make it for you,” Zalaznick says. “If you want Hainanese chicken rice tomorrow, you’ll have it. If you come to me and want a Kobe ribeye or a whole Dungeness crab cooked six different ways, we’ll do it. The theme is obviously indulgence. That’s what we’re about. But it’s also great for someone who says they’re not eating dairy this month or someone who wants vegan food. We’ll customize to your every whim.”

Major Food Group declined to share details about pricing for ZZ’s Club, but sources tell Robb Report that founding memberships are $50,000. (By contrast, New York’s new Aman Club has raised its initiation fee from $100,000 to $200,000.) A founding membership comes with access to ZZ’s Club for your immediate family and even future generations. Perks also include a dedicated concierge as well as wine and cigar storage. Plus, future members will have to be recommended by founding members.

ZZ’s Club is selling a limited number of founding memberships, and Zalaznick says that Major Food Group has already gotten thousands of inquiries. But again, you must be invited by the club. You can’t just apply.

And although Major Food Group lost its Michelin stars for Carbone and ZZ’s Clam Bar in New York this month, the hospitality company is full speed ahead with its whirlwind expansion. Along with ZZ’s Club, Major Food Group is simultaneously working on numerous new restaurants and an NFT that’s tied to Carbone’s 10th anniversary in 2023.

“That’s going to be both a unique piece of digital artwork as well as a highly utility-focused NFT that gets you special access to the Major Food Group ecosystem,” Zalaznick says.

This week alone will see the opening of two Major Food Group restaurants in South Florida. A two-story, 10,000-square-foot Contessa, a Northern Italian restaurant that was born in Boston, will debut in the Miami Design District, where Major Food Group already has a ZZ’s Club and is working on a new outpost of Sadelle’s that should open early next year. Also launching this week is Japanese Bocce Club at the Boca Raton resort, where Major Food Group already has restaurants that include the Flamingo Grill, Principessa Ristorante and a Sadelle’s. After the Contessa and Japanese Bocce Club openings, Zalaznick will head to the Middle East, where a Doha outpost of Carbone is opening in time for the FIFA World Cup Qatar in November. Major Food Group is also opening a Carbone in Riyadh, which is already home to a Sadelle’s.

And, of course, the highly anticipated sequel to the restaurant that started it all, Torrisi, is slated to open in New York City’s Nolita neighborhood in November. The new Torrisi has already hosted private parties for Karlie Kloss and Maison Valentino.

Major Food Group is moving at a serious velocity, but it’s been a long journey. The original Torrisi opened in 2009. Zalaznick sees Major Food Group’s diversification into private clubs and the metaverse as a logical extension for the high-flying hospitality group.

“We’ve been working on the NFT for almost a year at this point,” Zalaznick says. “It’s going to push us into a whole new frontier.”