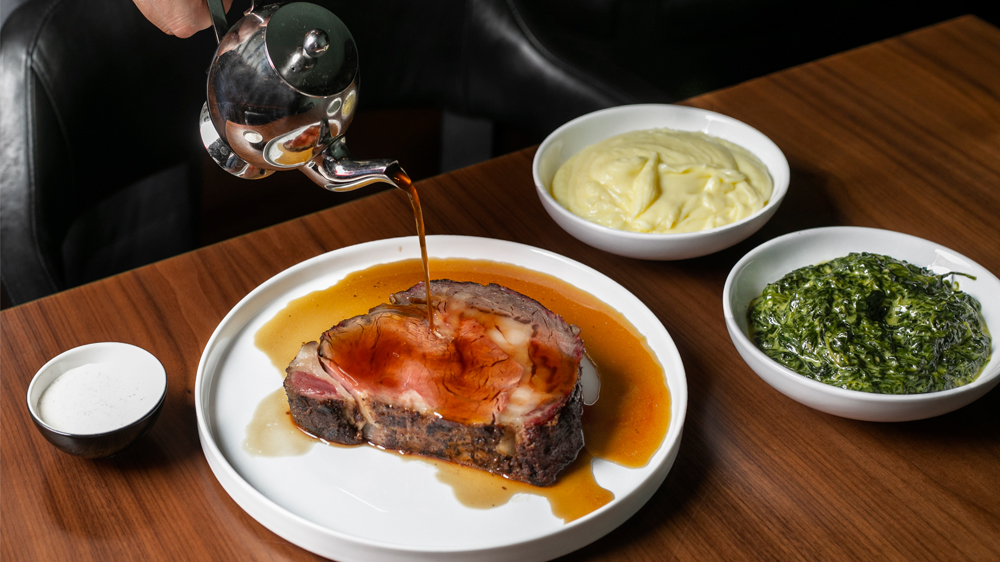 When chef David Chang decided to bring his popular Los Angeles restaurant Majordōmo to Las Vegas, he wanted it to reflect his love of three things: Lawry’s The Prime Rib, Brazilian steakhouses and Korean barbecue. There would be meat, but there’d also be entertainment.

“It’s going to be our take on a steakhouse, but done in a very classic way, believe it or not,” Chang said. “What we’ve always tried to do with our food is make the familiar fun and new. I want guests to say that that was the most fun they ever had dining. I want people to leave our restaurant thinking that they’ve never had any experience like that.”

The restaurant’s specialty is the smoked prime rib: Creekstone beef cured for 24 hours in salt and carved tableside. It comes with mashed potatoes, creamed spinach and au jus, and in the future will be available in multiple cuts, including large format. Another dramatic dish of the house is whole plate beef short ribs, which are smoked Texas-style, bone-in, and served with Korean barbecue staples such as beef rice, ssämjang, kimchi and bibb lettuce.

Momofuku’s newest restaurant is inside the Venetian.  Courtesy Rouse Photography

The menu also includes L.A. favorites such as the Chinese flatbread known as bing bread, which is available with shaved foie gras, sea urchin, wagyu beef tartare, 40-day cave-aged butter and Kaluga caviar, among other accoutrements. You can also start your meal with chilled shellfish like shrimp cocktail and king crab legs and a “vegetable bounty bowl” packed with fresh produce from California.

Other dishes include pastas like macaroni and black truffles; whole fish like steamed red snapper with ginger-scallion sauce; and steaks like a 60-day dry-aged Tomahawk served with cheese fries. The restaurant has a dozen rolling carts, some outfitted with burners, for serving food and beverage tableside.

Chang has said he also wants to open a churrascaria-style dining room and bar inside the space, or maybe a buffet. He considers it a work in progress and a place for continuous growth.

“I think this is one of the most insane things we’ve ever tried to do, which is funny because it doesn’t look like it,” Chang told Food & Wine. “But it certainly feels like it.”

The menu builds on the original Majordōmo in LA.  Courtesy Andrew Bezek

Chang also runs Momofuku at the Cosmopolitan of Las Vegas, and dozens more restaurants across North America. Jake Lewis, beverage director for the Momofuku restaurant group, said Majordōmo Meat & Fish is unique in that it inherited CarneVino’s wine cellar and got first pick at their list.

“That opportunity never presents itself in Las Vegas, especially the depth in some of these producers going back 10 years or more, or even to like the ’80s in some cases,” Lewis said. “Even I don’t get that opportunity in New York. So you have to take it and we’re going to build around it. It gives us such a great starting point that we can have wines that are ready to drink, with age, and then we will be able to build on that in time and continue to have vintage depth that normally would take a decade to acquire.”

He curated the wine list here to lean more toward classic producers, which he says are locally loved.

“We try our best to have product that is comfortable to the market that we’re in while still pushing things and trying to change the conversation a bit,” he said. “We’ll have really well-established wine producers, incredible vintage depth and a really deep cellar on a lot of products. At the same time we’re sourcing these young, up-and-coming and exciting producers, and stuff that we love, and some of our other markets [love], but isn’t necessarily as known here.”

The design is darker than most Momofukus.  Photo: courtesy Rouse Photography

All of the draft beers are from local breweries and all of the bottles and cans are from California. The cocktail menu features a martini section, which is a throwback to steakhouse classics like lemon drops, espresso martinis and lychee martinis.

“We’re doing it in our own way and we’re trying to make those better than people remember and really show what these established flavors can be,” he said. “Everything is relatively comfortable, but just one step further, with our own twist on them.”

For example, the lemon drop is made with saké and the Martinez martini includes sesame oil. There is also a cider and sake menu.

“I really hope that this is a destination for vintage depth, producer depth and then always finding something that’s unexpected,” he said. “Every time you come to Majordōmo Meat & Fish you should find something that was not here the last time you were.”