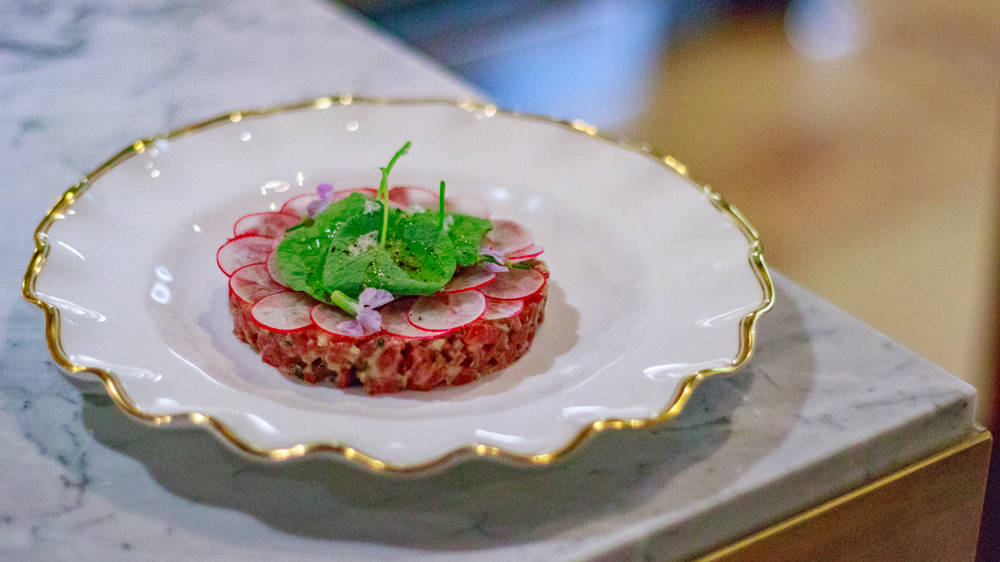 Steak tartare is as easy as a chopped salad to make at home. Why would you, though? In the last five or so years, interpretations of the French bistro dish have become nearly ubiquitous in upscale American restaurants. But with dining out cut-back, paused and derailed across much of the country, now’s the time to hone tartare at home.

Steak tartare wasn’t always a menu darling. When Christopher Kostow was coming up in kitchens in the late ’90s, the only tartare he remembers making was tuna tartare. Even while in France, he cooked in high-end kitchens where classic steak tartare never graced the menu.

“Stylistically, I’m not a big beef tartare guy. It’s on so many menus, and I can count on one hand the number of great tartares I’ve had,” says Kostow, who’s the longtime chef of Michelin three-star The Restaurant at Meadowood, as well as family-style The Charter Oak in St. Helena, California.

Eventually, Kostow found a tartare worthy of The Charter Oak’s menu: chopped aged beef tossed in smoky mayonnaise, garnished with raw onions, and chives and served with grilled Japanese milk bread. The composition was inspired by a canape from one of Meadowood’s annual Twelve Days of Christmas collaboration dinners. “I borrowed liberally from Dave Pynt of Burnt Ends in Singapore,” says Kostow.

With fires threatening much of northern California and Covid still pummeling the restaurant industry, tartare was among the simplest things Kostow had to think about when he recently spoke with Robb Report. Here are his recommendations and tips for making your own Michelin-star quality steak tartare.

Selecting the Right Cut of Beef

First of all, it’s important to shop for meat at a butcher you trust. Foodborne illnesses from beef tartare are rare because you’re starting with a whole muscle rather than ground beef. You’re more likely to get sick eating contaminated romaine, but, still, it’s important to use the highest quality meat possible.

For a substantial first course, plan on buying 4 oz. of meat per guest. Kostow recommends choosing a flavorful cut with some, but not too much, fat. Chuck, sirloin and ribeye all work well. “People do tenderloin, but it’s kind of boring,” says Kostow. He uses the same two- to three-week aged chuck to make his tartare and The Charter Oak Burger. Beef that’s aged longer tends to dry out and tighten a bit, which would alter the texture of the dish. “Maybe that’s something you’re going for. I’m not viscerally opposed to using super-aged meat, but you have to play with the ratios accordingly,” he says.

Even if your butcher offers to chop your meat, resist. It’s important to dice the beef as close as possible to the time you plan on serving the dish. “When meat oxidizes, you lose both the flavor and the color that’s so attractive,” says Kostow.

Lots of beef tartare primers recommend briefly freezing beef to make it easier to chop, but Kostow says all you need is a really sharp knife. “You want meat that’s really well tempered so the fat isn’t tight and hard,” he says. “Flavor is better released when it’s served at the right temperature. You don’t want it cold to the touch.

Kostow says the leaner the meat, the larger the dice, and if the cut is marbled, chop it more finely, around ⅛ inch.

For The Charter Oak’s tartare, Kostow dispenses with the traditional raw egg. Instead, he dresses the beef with ember mayonnaise that’s part Kewpie and part charcoal-infused oil. (He makes the latter component by dropping hot mesquite or almond wood charcoal into frozen grapeseed oil, but you can cheat with this bottle.)

If you’re after the egg yolk version, you’ll need one yolk per 4 oz. of meat, and you can either incorporate the yolk into a dressing with olive oil, Dijon mustard and a touch of sherry vinegar; or place the yolk on top of the final tartare and mix tableside. If you choose the showier presentation, you’ll just need to dress the beef with olive oil and salt or a simple vinaigrette before plating.

Bring in the Crunch and Contrast

Chopped parsley, capers, shallots and cornichons are classic components. More modern mix-ins might include pickled chiles, fried shallots, nori, fermented radish, or pumpkin seeds. If you plan on incorporating crunch into the beef mixture, aim for a scant tablespoon or less per ounce of beef. You also can add components as a garnish, as Kostow does, which makes every bite a little different.

Kostow says you can ruin tartare by adding too much fat, acid, and salt, and, while riffing is encouraged, it’s wise to master the basics before piling on components. “If you start with good product—quality beef, olive oil and salt—you’re 99 percent of the way there,” he says. “That’s true for all cooking.”