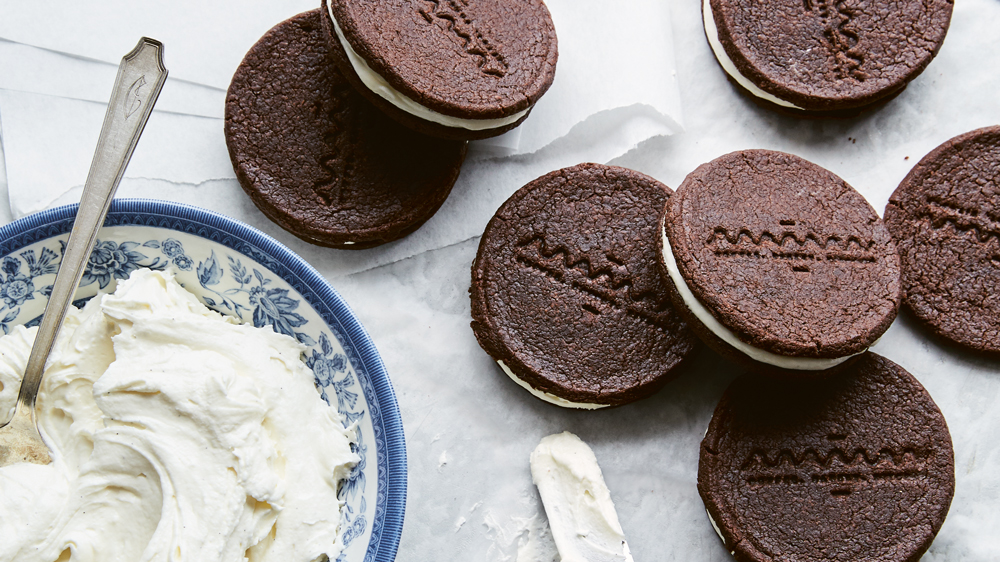 When Benjamin Sormonte and Elisa Marshall opened their independent bakery and café Maman in 2014, it didn’t take long to create some serious buzz. New York City—no stranger to confection crazes in the prior decade with cupcakes and Cronuts drawing crowds—fell in love with the SoHo spot’s nutty chocolate chip cookie. They garnered lines around the block and eventually an endorsement from other than the Queen herself (I’m speaking of Oprah, of course).

That chocolate chip hit wasn’t the only cookie recipe they were toying around with. They also began to wonder if they could improve on near perfect: Could they make a better Oreo? They believe they did. “Our version is reminiscent of the classic after-school snack but doubles down on the buttery, chocolatey notes and is finished with fleur de sel,” Sormonte and Marshall wrote in the recently released Maman: The Cookbook. The duo haven’t kept the secrets to themselves, sharing their recipe for their treat with Robb Report readers. We encourage you to whip up a batch and do a side-by-side taste test with the original—and a tall glass of milk.

In a small bowl, whisk together the flour, cocoa powder, and fleur de sel.

In a stand mixer fitted with the paddle attachment, combine the butter, brown sugar, and granulated sugar and beat on medium-low, scraping down the sides of the bowl as needed, until fully combined, about 5 minutes. Add the flour mixture and mix on low until a crumbly dough forms.

Turn out the dough onto a clean work surface. Press into a disk ½ inch thick, wrap tightly in plastic wrap, and refrigerate for at least 1 hour and up to 48 hours. (If the dough is refrigerated for longer than 1 hour, let it stand at room temperature for about 15 minutes before rolling.)

Set a rack in the center of the oven and preheat to 350°F. Line two sheet pans with parchment paper.

On a lightly floured work surface, use a rolling pin to roll out the dough to about a ⅛-inch thickness. If the dough cracks, use your fingers to pinch it back together. Using a 1¾-inch round cookie cutter, cut the dough into rounds. Gather up the scraps of dough, form into a disk, and refrigerate for at least 30 minutes before rolling again and cutting out more rounds.

Arrange the cookies on the prepared sheet pans, spacing them about 1 inch apart, and freeze for 10 minutes.

Transfer one sheet pan to the oven and bake, rotating the sheet pan as needed for even baking, until crisp around the edges with a slight give in the center, 8 to 10 minutes. Let cool on the sheet pan for 2 minutes, then transfer to a wire rack to cool completely, about 20 minutes. Repeat to bake the remaining cookies.

In a double boiler, or in a heatproof medium bowl set over a pan of simmering water, melt the white chocolate, stirring as needed. (Alternatively, place the white chocolate in a microwave-safe bowl and microwave in 30-second intervals, stirring after each interval, until fully melted.) Set aside to cool slightly.

In a stand mixer fitted with the paddle attachment, combine the butter and confectioners’ sugar and beat on low until fully combined, about 1 minute. Increase the speed to medium and beat until very smooth, about 3 minutes. With the mixer still running on medium, gradually add the melted white chocolate, followed by the vanilla, and beat for 2 minutes to thoroughly combine.

Transfer the filling to a piping bag fitted with a medium round tip. (Alternatively, spoon the filling into a resealable plastic bag and snip off a bottom corner so there is a small opening.) Pipe about 1 tbsp. of filling onto the flat side of half of the cooled cookies. Top each with another cookie to make sandwiches.

Reprinted with permission from Maman: The Cookbook by Elisa Marshall and Benjamin Sormonte with Lauren Salkeld. Copyright ©2021. Photographs by Linda Xiao. Published by Clarkson Potter, an imprint of Penguin Random House.