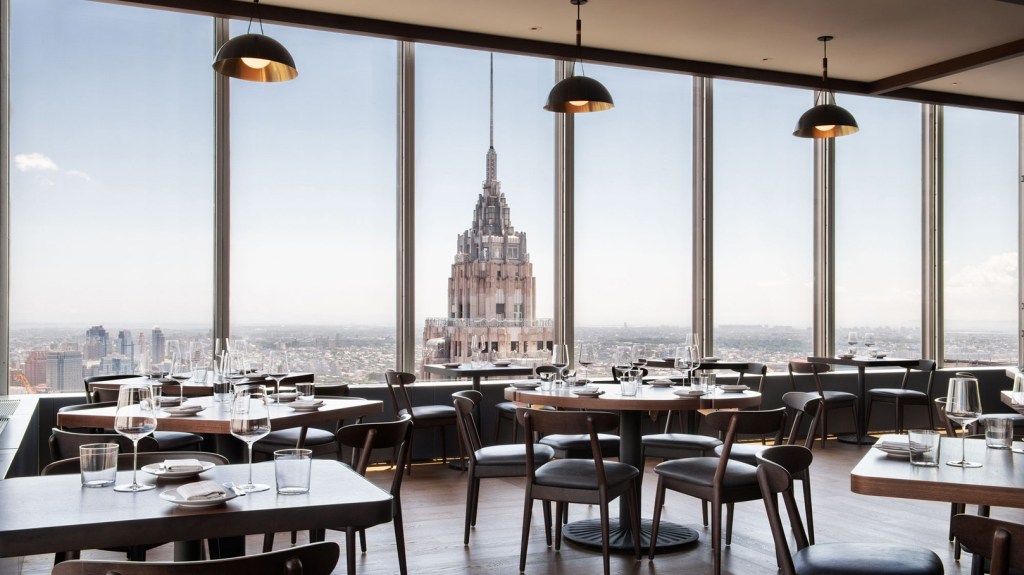 Manhatta, Danny Meyer’s new restaurant that’s perched on the 60th floor of a Lower Manhattan skyscraper, will be celebrated early on primarily for its epic views of New York City. And yet, Meyer and chef Jason Pfeifer didn’t want those vistas to define their efforts. “We talked about how do we make the view secondary?” Pfeifer says. “It’s breathtaking, but we don’t want it to be the most important thing about eating at Manhatta.”

They started with connecting to the place the diners will be staring out at. Meyer and Pfeifer dug into old menus from bygone restaurants and mined Meyer’s deep knowledge of New York’s dining history to start testing some dishes. And they went even further into the past, finding inspiration in the book Mannahatta, where the author created maps that reconstruct the natural plant and wildlife of Gotham before it was overtaken the skyscrapers surrounding the restaurant’s dining room. It gave them a sense of place. “It was inspiring to see things like the oysters on the bay and sparked my interest in the ingredients of the region,” Pfeifer says.

The menu also draws on Pfeifer’s personal experience. “I’m blending the background of various styles of restaurants I’ve worked at, kind of like how New York is a melting pot of cultures and people,” Pfeifer says.

Manhatta will serve a prix-fixe three-course menu, where threads of Pfeifer’s kitchen history running through the dishes. He’s cooked French (Per Se), Nordic (Noma), New American (Gramercy Tavern), and Italian (Maialino), with the last eight years spent in Meyer’s Roman trattoria-inspired restaurant. The cuisine leans French, has plating more casual than composed, and sources ingredients with a care he learned from cooking Italian. Ultimately, the menu becomes his own.

“I like to take classic ideas and put a spin on them,” Pfeifer says. “I don’t want to do a dish traditionally, but I don’t want to stray too far from the traditional.” So the escargots aren’t served inside their shells, they’re wrapped in sausage along with garlic parsley and butter. And on the bar menu, the burger is merged with French onion soup, where it’s dressed with caramelized onion jus, covered in gruyere and brûléed like the soup. But some classics are faithful renditions, like the veal blanquette, because as Pfeifer says, “There’s no way I can mess with it. I can’t alter that dish because it’s so damn good.”

Pfeifer presents his food in a way that melds with the overall vibe of the restaurant. Like how the architects created an elegant and understated space that doesn’t distract from the view, Pfeifer’s approach to plating is unfussy. “I like to be minimalistic, nothing looks too composed. It’s a harmonious scattering where it looks organic and will be a little different every time,” Pfeifer says. “I want the restaurant to feel fun and casual. As Danny says, it should be a party, not a cathedral.”

And though he feels he’s creating an experience that rivals, if not overshadows the view, he’s happy to have an open kitchen to enjoy it with the diners. “I’ve worked in basements and kitchens in the back with no windows for so many years that it’s pretty incredible to stand in my kitchen and stare out at the city.”