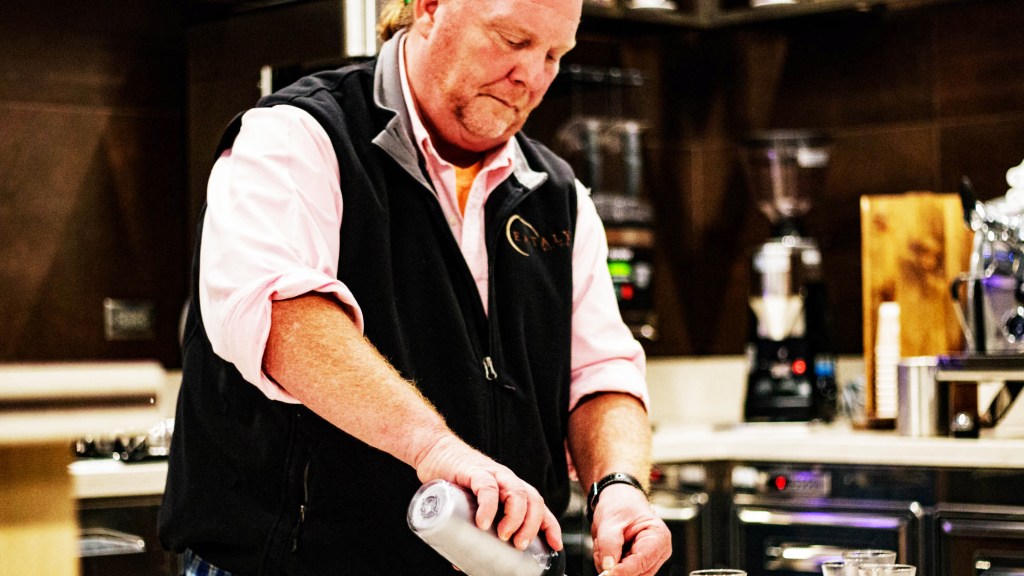 For all the economic dynamism of the United States in the post-WWII era, America’s food wasn’t so dynamic. It was an era where modernism made processed food prized. TV dinners made meal prep easy and Tang sent astronauts to the moon, parents would remind their children. And you can’t argue with an astronaut.

But, eventually, the spell was broken and Americans started to find enjoyment in food to the point of pastime. Foodies came into existence, and chefs became celebrities as people rediscovered how delicious real, handcrafted, creative food could be. One of the great pied pipers of this movement was Mario Batali.

He was an evangelist for the pleasures of food, a showman who helped popularize the Food Network with his Molto Mario. But he backed up his bombast with cooking. At the tiny Pó and then Babbo in the 1990s, he broke the stranglehold that red-sauce Italian food had over Americans’ conception of Italian cuisine. He mined the peninsula of Italy for inspiration, serving us not spaghetti and meatballs, but beef cheek and lardo back when that seemed just odd.

In 2010, he partnered with Eataly, the massive Italian food-market-meets-restaurant-meets-foodie-amusement-park, to bring the first outpost to America. Now with two locations in New York, one in Chicago, and another in Boston, Batali and Eataly are coming to the City of Angels. It’s a massive 67,000-square-foot celebration of Italian food, replete with 10,000 products, a specialty wine shop where you can find rare Barolos, a pair of massive pizza ovens, restaurants by Michael Cimarusti and Jason Neroni, and much more.

As Batali opens Eataly L.A. today, we sat down with the chef-entrepreneur to discuss his original reservations about partnering with Eataly, the growth of America’s culinary culture, and why an Eataly San Francisco isn’t likely to happen.

How did your relationship with Eataly first begin?
[Eataly founder] Oscar Farinetti came over and asked me and Joe Bastianich if we were interested, and we said no. Then he asked Lidia, and Lidia talked to Joe, and they got somewhat interested, and I said still no. And Joe said, “Hey, let’s go to Torino and take a look.” So we spent a weekend in Torino. We went into the store for 10 minutes, and I’m like, “Yes.”

Why were you a “no”?
I didn’t think there was any story for us in retail groceries ’cause I’d lived in the box of what a grocery store looked like. You basically sit around waiting for your fish to go bad or things to expire, and it just didn’t seem like a great model. Plus, my father-in-law was in the goat-cheese business, and he said the retail business was the hardest one ever. Turns out it is hard, but I mean, it’s also very rewarding and exciting.

What was it when you visited that turned you into a yes?
It was mind-blowing. It was like, I get it. Because everything was just so interwoven. The store was so big, and the restaurants were so involved in the retail, and the retail was so attached to the restaurants, just like a giant fabric of bubbling, seething, moving larval situation. It was unbelievable. It was just so exciting.

Were you surprised by the reception you received when you first opened in New York?
Well, we’d always hoped, but we didn’t know because I’d never been in the grocery store business.

When I lived in New York, sometimes I’d walk in and see it so packed that I’d just turn around and leave. Maybe I’m an agoraphobe.
Yeah, if you come in on Saturday afternoon, 3 o’clock, it’s going to be a monster. Tuesday nights at 9 o’clock might be good. Or maybe not! I don’t know! Any town like this town, like New York that has three working shifts, they can be busy at any time. Like for who knows why? You know when it’s the first snow, no one comes in. On the second day of the snow, New Yorkers are like, “I’m going outside!”

When I think of America in the 1990s—back when you were opening Babbo—I don’t think of a food scene and dining culture that would have supported a place like Eataly. Do you think we would have been ready for something like this back then?
Well, I mean there was at that point Dean and Deluca, and Balducci’s when Balducci’s was good, right? So, there was stuff like that; it just wasn’t as big. It was packed into a small space. I think Americans recognize quality. They recognize product. I think America has grown up a lot since then, so maybe this wouldn’t have been as understandable to Americans. But I think they might have figured it out.

This isn’t a grocery store that you just go in and grab stuff. This is a grocery store where you taste stuff, where you experience it, where it’s visceral. And for people who maybe don’t travel to Italy very often, this reminds them of their last trip to their hometown—their ancestral home where they saw that pasta or that candy or that kind of pizza alla pala, and it brings them to an emotional high, not just a “Hey, I can get my groceries here.” That’s what it can be.

Is there a dissatisfaction with traditional, big-box shopping that allows you to thrive?
No, there are a lot of people that have no interest in an experience with shopping. Like for me, clothing shopping. I know what I order. I go online. I go to either Tommy Bahama or whatever my shirt is. [Batali pulls up his collar and cranes his neck to read the tag.] What does that say? Polo? Ralph Lauren maybe? Or is that Brooks Brothers? I don’t know.

Well you’re not in Crocs anymore at least.
No. I gave up the Crocs, you know. I stopped wearing them because it was time to start wearing some grown-up shoes. And my good buddy Kanye West makes shoes, so he sent me a dozen pairs of these, and I’m gonna be all right.

But you know, there’s a lot of people who don’t want to interact. They want to go in and get out—and we’ll have that here, we’ll have grab-and-go here. We’ll have sliced salami, and you can grab that bread without talking to anybody, and you can escape here without spending any time talking to a human being if you don’t want to. But this is also the place if you do want to talk to a human being. We have them, and they’re here in every way.

But the experience is what distinguishes us. That’s what makes us different. You know, you can go online and shop for anything, like I shop for my clothes. If you want to really garner information from people that are passionate and knowledgeable and have been to where the product is made, this is the kind of place you got to go. You can go to Kroger’s or a Whole Foods, and they’ll help you, but there are not people that are from Sorrento selling you this Sorrento macaroni. We’ll always have that. We’ll have people that are born and raised in these products or have been there with us to understand them and be part of them.

But this is bigger than those big-box grocers—how do you scale up a staff to deliver on that premise?
We have 60 employees from Italy right now from the original shop, and they’ll stay here until they’ve trained the people that are going to do their jobs to the level that we find satisfactory.

And then how do you retain those people?
We pay them more! The whole thing comes down to the dollar, and if you pay people more, you get longevity—which seems incongruous to a rookie business person—but if you pay people more and they stay longer, you increase the value of each person’s production, and you end up making more.

What was the catalyst for finally coming to L.A.?
At the end of the day, you need to find a real-estate partner, and Westfield’s a great real estate partner. They were making this mall. We need this kind of size, which is a tough space to find. It’s really about the real-estate deal. And also our ideology.

What is the Eataly model to you?
Urban. Accessible by foot if you can. In the center of a town or in the center of an area of commerce that doesn’t have a 20,000-car lot next to it and standing all by itself. It needs to rely on the synergy of the neighborhood around it. It can’t be a free-standing box. And it isn’t. We’re surrounded by retail, surrounded by humans in their homes. So that’s really crucial.

How do you set this apart from other U.S. locations?
The difference is that in each place, we’re also using very geo-specific ingredients. Our dairy’s from here, our fish is from here, our meat is from here, you know? Our olive oil is still from Italy, our pasta’s still from Italy, but we’ve embraced the California agriculture as our partners. We’ve never sold American wine in any Eatalys. We’re selling some California wine because we’re supporters of the California wine industry, particularly now that it’s on fire. We want to help them as much as we can.

At a time when L.A. has great Italian restaurants with Rossoblu, Felix, Alimento, and more, how do you compete?
It works for us. Everyone that goes to Felix wants to come here because they want to be able to make it. It’s how I met all my rock star friends. Rock stars travel the world. They love going to Italian restaurants. So eventually they find the best ones, and they go to them, but they don’t go to the same restaurant every night because they’re rock stars. And in the same sense, customers don’t do the same thing. Maybe they’ll go to Felix once a month or once a week, but everyone knows that they can cook Italian at home. Maybe they’re not so confident with making Thai food, but everyone knows they can make Italian food, especially if you can buy the ravioli here and the sauce here and the osso bucco already ready here. All you got to do is pick up the recipe, and in an hour you can make a fantastic three-course meal shopping here.