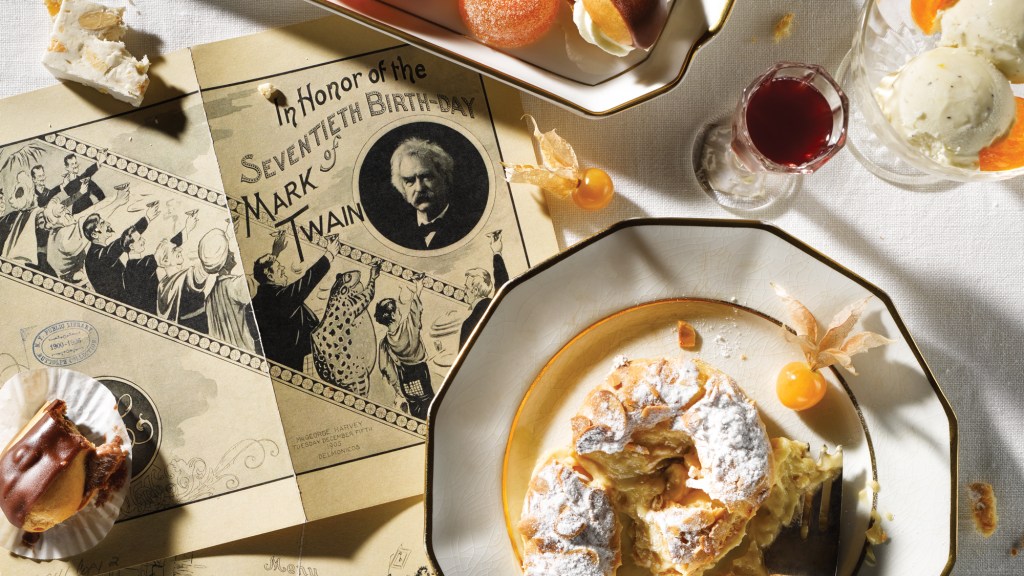 When Mark Twain’s friend and publisher George Harvey threw the master of American letters a 70th birthday party in 1905, he didn’t skimp as host. Choosing to hold the party at Delmonico’s in New York—which is celebrating its 180th anniversary this year—Harvey invited 170 guests, had a 40-piece orchestra perform, gave each attendee a foot-tall, plaster of paris bust of Twain, and printed a special menu with illustrations by Leon Barritt showing the writer’s varied occupations throughout his life, from riverboat pilot to editor.

The menu also provides a glimpse of fine dining at the end of the Gilded Age. There are the staples that endure to this day—Champagne, oysters, and ice cream, for instance—among the era-defining ingredients and preparations that are mostly lost to history.

Though Charles Ranhofer was no longer chef at Delmonico’s when the party occurred, the man who had an outsize role in shaping American dining in the late 19th century—having invented such classics as Baked Alaska and Lobster Newburg—still had his fingerprints on the Twain party menu. It was fitting that one legend should be feted while dining on the food of another.

Many of the dishes featured—from timbales périgordine (a French dish where ingredients, including chestnut puree, truffles, and minced chicken, are cooked inside a cylindrical mold) to celery mayonnaise (it’s exactly what it sounds like)—can be found in Ranhofer’s epic 1894 culinary tome Epicurean. One menu item in particular stands out as a delicacy of a bygone era: turtle.

At the turn of the century, turtle was very popular, coveted by those who could afford it, until overfishing and mock versions drove it out of fashion in the States. Ranhofer’s cookbook featured 13 recipes for turtle and terrapin alone. At Twain’s party, guests dined on Baltimore terrapin, for which chopped turtle is fried in butter with salt, pepper, and cayenne, then braised in stock, tossed with cornstarch to thicken, and finished with sherry—a dish that might have limited appeal to contemporary palates.

However, it wasn’t the cuisine that made Twain’s celebration sufficiently notable to compel coverage in the New York Times and Harper’s Weekly, the latter of which published a supplementary issue chronicling the speeches of those in attendance. Instead, it was the company: Food, like fashion, can be fleeting, but the friends and family gathered at any party make the memories endure.

11 Chefs Share the Thanksgiving Sides They Can’t Go Without