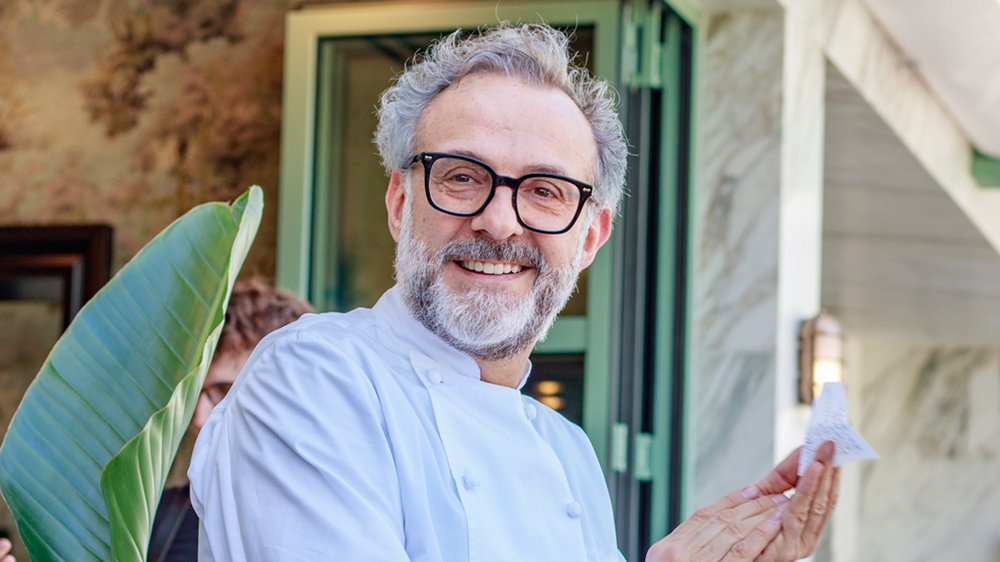 On the top floor of the Gucci building in Beverly Hills, on a terrace overlooking Rodeo Drive, Massimo Bottura is reclining at a table tucked in the corner, letting the 72-degree sunshine radiate down on his face. After a moment, the chef of Osteria Francescana, the Italian restaurant ranked No. 1 twice by the World’s 50 Best, pops up to exclaim, “I talk to my wife, Lara, and in Modena it is cold. I don’t want to leave Los Angeles!”

While Bottura will have to return to chilly northern Italy eventually, for now the Michelin three-star chef has an excuse to stay: Gucci Osteria da Massimo Bottura Beverly Hills, his first restaurant in North America and his second in collaboration with the Italian fashion icon, opens Feb. 17.

In the U.S., Bottura is mostly recognized for his good-natured appearance on the Netflix show Chef’s Table and the documentary Theater of Life. While in kitchens around the world, Bottura is the type of revered figure who inspires other cooks to uproot their entire lives at the mere suggestion of joining his team. Literally. One was working in Brooklyn not so long ago, was alerted to the new restaurant’s opening and flew to L.A. the next day.

The L.A. kitchen will be helmed by chef de cuisine Mattia Agazzi; he was previously the sous chef at Bottura’s Gucci Osteria in Florence, his first collaboration with the clothing brand. Under chef de cuisine Karime López, the restaurant was recently awarded a Michelin star. It marked the first time a Mexican woman had ever earned a star.

López is also soaking in the California sun for the time being. She is temporarily joining Agazzi at the Beverly Hills outpost.

“As soon as I asked Mattia and Karime to be the chef here, they jumped on the plane, they arrive immediately,” Bottura said. “They’re so talented; they deserve it.”

The menu they put together is rooted in Italy, but references to other cuisines found in Southern California as well. Organic produce is procured from local farmers markets. Seafood for the Insalata di Mare is sourced fresh from Santa Barbara and lightly touched with heat, before being paired with a salad made from seaweed, red beans and saffron.

Playfully named and executed dishes include Pasta Fagioli With a View of the Pacific Coast, which is layered with beans, sea urchin and raw veggies; Coming From the Hills pairs West Coast white trout with hazelnuts and mushrooms; and Risotto Camouflaged as Pizza features creamy risotto dotted with tomatoes, basil and mozzarella.

“What is the essence of our cuisine? It’s looking at the past in a critical way and never in a nostalgic way,” Bottura said. “To bring the best from the past into the future, I use this technique to sublime the ingredients, and not the ego of the chef.”

The restaurant will also serve some of the chef’s signature dishes from Florence, such as the Emilia burger. The patty includes cotechino sausage and is topped with Parmigiano-Reggiano, an anchovy and caper salsa verde, and a balsamic mayo. The menu will also feature his famous tortellini, which is sauced with a simple cream made from 36-month Parmigiano-Reggiano and water.

“If I start using butter and cream and stuff like that, your palette saturates and you don’t feel anything,” Bottura said. “But if you use water in sauces, you just get into the heart of the product, and the flavor, the essence of the product.”

Bottura believes contemporary cuisine is as much about ethics as it is about taste and aesthetics. This is why he tries to not waste anything. Take the house pâté, for example. Its contents constantly change based on what is available in the kitchen—from chicken to veal to beef to fish.

“Cooking is an act of love, so when you cook, you take the same time and energy and really feel,” he said. “We don’t cook just to create good food, we cook to transfer emotion.”

A dessert inspired by a Malibu Sunset.  Photo: Jeremy Repanich

The 50-seat restaurant atop Rodeo Drive is as showy as the men’s and women’s boutiques below. It is outfitted with Gucci-patterned wallpaper, elegant red marble, plush velvet banquettes and vintage-looking place settings, many of which are inspired by his Florence osteria.

Even though Bottura’s restaurant partnership with Gucci did not begin until 2018, his connection to the brand has been in the making for a lifetime: The chef grew up with Gucci CEO Marco Bizzarri in Modena. On a trip to the West Coast to visit his friend, Bottura was wandering around the flagship store’s space, which was in the midst of a renovation and expansion, and stumbled upon a room full of packaging materials.

“I said, ‘What are you going to do with this storage place? Let’s make another [Osteria],’” Bottura recalled. “Marco, on the other side of the phone [said], ‘OK, let’s do it.’ One year later, we open.”

Bottura is set to open a third osteria in Ginza, Tokyo. He is also planning an American expansion of his nonprofit venture, Food for Soul, which feeds the homeless and advocates for reducing and reusing food waste. He will open kitchens in New York and San Francisco later this year; locations are already open in Milan, Paris and London.

“Food is an act of love,” Bottura said. “If you don’t have passion, it’s just another food … But with passion, it goes directly into your heart and makes a difference.”

Gucci Osteria da Massimo Bottura will be open seven days a week for lunch, from noon to 2:30 p.m., and dinner, from 6 p.m. to midnight.