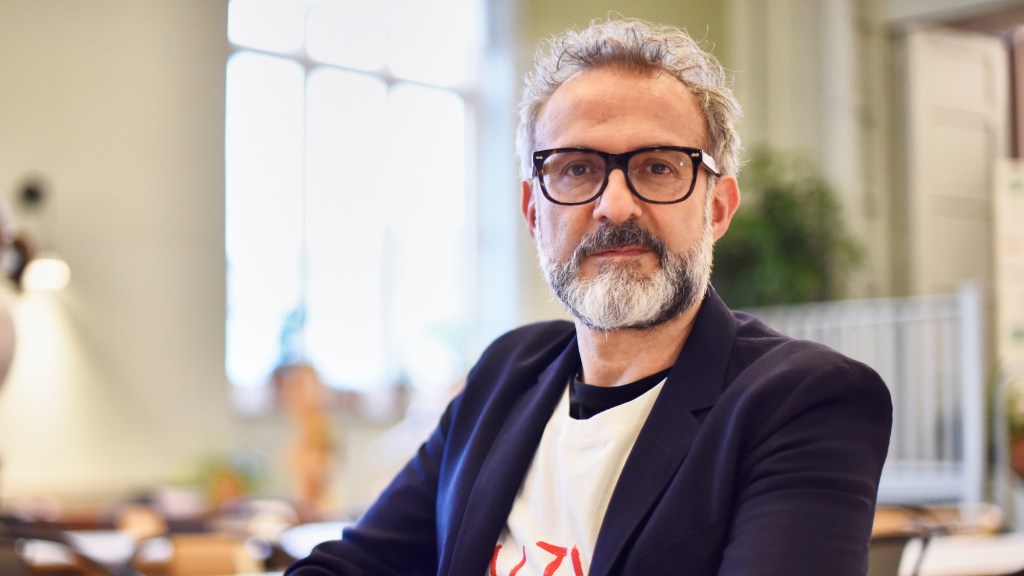 Imagine getting 60 of the world’s greatest chefs to fly out and meet you. It sounds impossible, right? But you’re not Massimo Bottura. “You know what this is?” the chef of three-Michelin-star Osteria Francescana says as he extracts an iPhone from his pocket, holding it up in front of him. “This is a phone. I look at the phone. I start to put in the numbers of all my friends. Not even 45 minutes, every single one said, ‘We’re going to be there.'” He laughs and tucks it away again. “That was the process. It was unbelievable.”

Now Bottura wasn’t telling the titans of the industry to drop what they’re doing and fly to Italy for no good reason. As the 2015 Milan Expo (an event formerly called The World’s Fair) approached, his home country would play host with the theme “Feeding the planet, energy for life” as the driving ethos of the months-long event.

But instead of building a pavilion at the Milan Expo 2015, he decided to build a refettorio, a place where he could feed the needy during that time. The project was two-pronged: Not only would it fight hunger, but it would also take a creative approach to solving the problem of food waste. It’s a problem chefs face all the time—to keep their restaurants profitable, they need to get the most out of the products they buy. And that’s why Bottura called his friends.

In his book Bread Is Gold, which he released late last year, Bottura wrote, “The knowledge, creativity, and know-how of professional chefs was essential to prove that salvaged food—overripe or bruised and beyond expiration dates, as well as scraps and trimmings that otherwise would be thrown away—were not only edible but even delicious.”

So over the course of six months, chefs from Daniel Humm and Rene Redzepi to Ana Ros and more came to Milan to take the raw ingredients they had available that day and turn them into delicious meals for kids in the afternoon and the needy at night. It was like an altruistic version of the show Chopped. Bottura gathered the recipes and stories from those months and turned them into Bread Is Gold. But his work isn’t done. In the wake of that refettorio, he has opened additional soup kitchens and expanded his philanthropic efforts through his foundation, Food for Soul, which he created with his wife, Lara Gilmore. We spoke with Bottura about his soup kitchens, the world-class chefs who pitched in, how non-chefs can help, and what’s next for his foundation.

How did you bring this idea of the soup kitchen for Milan Expo to life?
I always keep the door open for the unexpected. I have big dreams, and dreaming to make a pavilion on the Exposition was like, all right, we can do it, but no one was asking us the right questions. It wasn’t the real thing, you know? They weren’t asking chefs how they could feed the planet.

So I knock on the door of the church. The archbishop’s scholar is a philosopher, and he understood immediately the quality of the project, and he said, “I’m going to give you the space.” And I said, “We’re going to do it in the center of Milan,” because I want to rebuild Miracle in Milan, the 1951 movie. They said, “Okay, let’s talk about it. Give me one week, and we’re going to go out. In the meantime, thanks for your passion, your energy, positive energy, and your ideas.”

One week later, they meet with Pope Francis, and the Pope said, “Let’s bring light to the periphery,” and instead of doing center of Milan, we’re doing outside. We went in the most neglected neighborhood, and the Church owned this theater, and that is the periphery of architecture.

When these chefs from around the world arrived, how did they integrate into the kitchen?
Some of them, like the French, they flew from Paris or from Lyon to Milan; they came the same morning. Ducasse arrived the same morning at a quarter to 9. He was opening the truck, unloading everything, cooking for lunch for kids. At lunch, we usually fed kids in schools, to teach them how not to waste. Then, for dinner, the needy.

In the evening, Ducasse flew back to Paris with the last flight. So, he was there one day. Carlos Garcia from Venezuela stayed 4 days because he helped also the other chefs cook. Some people stayed longer because they were spending time in the Universal Exposition to see what was going on because it was unbelievable.

Was there an improvised dish that you created at the refettorio that really stuck with you?
Oh my god. There were so many. For me, personally, I’m so into breaking tradition and rebuild traditions to keep them alive. And I made a pesto.

The night before, some of the guests were complaining because we didn’t serve enough pasta; they love pasta. I said, “Okay, tomorrow we’re going to cook some pasta,” because I saw so much basil in the refrigerator. But I didn’t have enough basil, so I add some mint, I add some thyme together. And then at the moment I had to put some pine nuts, I didn’t have pine nuts. I didn’t want to buy 45 euro for a half kilo of pine nuts, so I added bread crumbs. The pesto came out so well and so smooth and so light and so tasty; it was fantastic. That was something super special.

How can people fight against food waste in their daily lives?
The best recipe is to stop buying tons of frozen food once a month and storage into freezer in your house. But the most important thing is buying the right amount of food you need for a couple of days, 3 days. Restore the relation with small shops—like butchers, farmers, farmer markets, fisherman place—as they’re going to give you the best. Buy local and buy seasonal food. You’re going to eat better, you’re going to save money, and you’re going to fight waste because you’re going to cook everything you have in the refrigerator and not have so much stuff.

Along with opening more refettorios, what other initiatives has your foundation been working on?
My wife, Lara, has an amazing project. We have a disabled child, and we always thought, “What is he going to do after high school?” For him, it’s fine, because we have so many activities to do. For other kids, they’re going to have a miserable life. What if we invent something?

We found out that we could do something special to transfer tradition from the grandmothers to the disabled child—they’re very good on repetitive things—and start with five kids making tortellini, handmade pasta.

The grandmothers were rolling pasta, some butchers made some pesto, and they were making tortellini. This initiative became so successful, and now there are 36 kids, and we make so much tortellini. In September, the town hall gave us beautiful space, an Italian company donated the kitchen, and in September it’s going to open this new place.