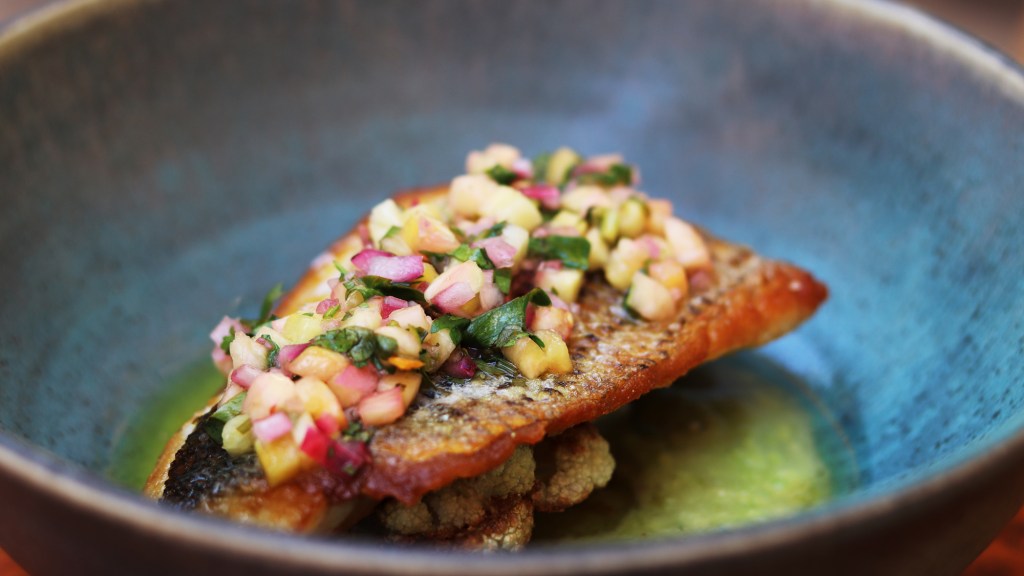 Maycoll Calderon didn’t have the most auspicious beginning to his culinary career. “When I was 17, my mom pretty much kicked me out of the house and I was sent to Spain,” the chef says with a laugh. “I had a good friend over there, and I started working at a really good restaurant. That’s the start, and then slowly I realized I really liked the kitchen.”

Calderon cooked in a small town outside San Sebastián and began working his way through some of the powerhouse kitchens of Spain—first at three-Michelin-starred Arzak and later at Ferran Adrià’s legendary El Bulli. Eventually, he arrived stateside to cook with Jean-Georges Vongerichten in New York, and 6 years ago, he took the job to open the chef’s J&G Grill in Mexico City. “Then I fell in love with Mexico and felt the energy of the place and wanted to stay,” Calderon says.

After 10 years with Vongerichten at multiple restaurants in different countries, Calderon finally ventured out on his own, opening Huset in Mexico City, where he uses local produce to make rustic fare cooked over charcoal and wood. And while he’ll be the first to tell you that he’s not producing traditional Mexican cuisine, his 6 years in the country have made him a student of its regions and flavors at a time when the rest of the world is waking up to how great Mexican cooking can be.

Now, he’s pouring that knowledge into Tintorera, the seafood-focused restaurant he just opened in Los Angeles that draws on influences from Mexico. “I’ve been throughout the country—east, west, north, south. I’ve been to the coast. I’ve been to the mountains. I tasted everything,” Calderon says. “What we do here is my interpretations of my travels.”

We spoke with Calderon to explore what drew him to Mexico, how the country has affected his cooking, and why it’s finally being recognized for having one of the world’s great cuisines.

Coming from outside of Mexico, did you learn anything new about cooking once you arrived?
The simplicity of how they use the product. They can use three ingredients and they make a wonderful dish. They do everything in search of simplicity, and it’s so good. That’s when I realized, “Wow, I like this place. I’m staying.”

You’ve known it’s great for years. Why do you think more people are taking notice, as well?
People didn’t know. People just thought it was only tacos and nothing else. But in reality, Mexico is such a beautiful place with so many flavors that you can try. And right now, there are so many good chefs and restaurants in Mexico who are making it a power in gastronomy.

Who are the people pushing it forward?
Of course, Enrique [Olvera of Pujol in Mexico City]. Enrique, he really took it out and showed the cuisine to the world. And then there’s Jorge Vallejo, of course, with Quintonil and Edgar Nuñez with Sud777. Those are restaurants on the 50 Best List in Latin America and in the world.

Has it evolved in the 6 years since you’ve lived there?
There’s an evolution for sure, but gastronomy in Mexico—it’s a cultural thing. It goes back in time. Recipes are passed down through generations. And now everybody’s looking into Mexico, which is awesome. The New York Times said it was the number one city to see and travel to in the world. And of course, international chefs, like Rene Redzepi with Noma in Mexico, he researched Mexico and its flavors and ingredients, and he made an interpretation of his philosophy and what he thought about the country.

You’ve traveled throughout the country to learn more about its food. Was there a region that really stood out to you?
Oaxaca is one of them for sure. Oaxaca is amazing. It’s very interesting there how everything revolves around food. It has two main regions: one in the mountains and one on the coast. When you think about the mountain, it’s all about earthy flavors. That’s where you see moles. Moles are amazing; they’re beautiful. And the traditional way they do it is amazing. Then you go down to the coast, and it’s completely the opposite. It’s super fresh, super simple. It’s fresh fish, lime, some chili, cilantro, boom! Go, have fun. Oysters, everything. They have absolutely everything.

Veracruz is also another great place. It’s so different from Oaxaca. It’s on the Caribbean side and has more tomato flavors and fish on the grill—so delicious and simple.

The aspect of Mexico you’re highlighting at Tintorera that hasn’t gotten as much attention as the food is the wine. How would you describe the country’s wine scene?
Wine from Mexico does surprise people. I’d say Baja is 30 years behind Napa in technology and development, but we’re getting great wine makers traveling to Mexico. And they’re looking at the beautiful place that they can grow and make beautiful wine, but their production is low. I’m trying to get those wines here, but it’s hard. I have some on the menu now, but it will continue to grow.

What varietals thrive there?
They grow awesome Cabernet, of course, as well as Tempranillos. Nebbiolo grows in the Valle de Guadalupe mostly. They’re doing Chenin Blancs and Chardonnays, of course—not like a Chardonnay from Napa.

What producers are on your list?
My good friend José Luis Durand makes some of the best wine in Mexico. He’s from Chile, but he came to Mexico to work at a winery, and he fell in love with it, too, just like I did. I have his label, Icaro, on the menu.

What else can people expect from Tintorera? Is it difficult to come to a city to cook Mexican when people already have such a wealth of options?
First, I have to respect what’s happening in L.A., no? Also, I’m not trying to change the world. I’m trying to make good food, make it simple and delicious. That’s my philosophy, and, of course, if the restaurant does well, we do well, and everybody’s happy.

Does being in Los Angeles change your approach?
Yeah, I do some different stuff. Right now, I’m doing a ceviche with hummus. I have to adapt to what’s happening in L.A., and in L.A., people love hummus; it’s like a hummus obsession. And I made it my way, using Mexican ingredients. I create ceviche with delicious serrano chili, avocado, radishes, and then if you mix it with a hummus, it takes it to another level.