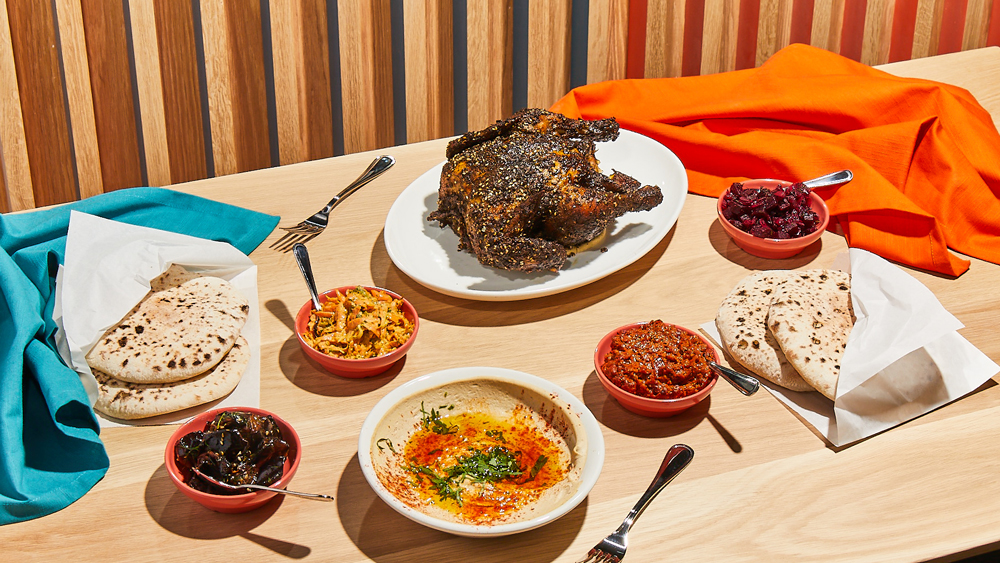 Tel Aviv, Israel, has a thriving street food culture built around sandwiches: warm pita pockets stuffed with layers of fresh salads, rotisserie meats and tangy sauces. You can find the portable meals at hole-in-the-wall food stalls all over the city, and now Philadelphia’s foremost evangelist for Israeli cuisine is bringing that same atmosphere to Pennsylvania.

“Philadelphia has amazing sandwiches and I am so excited to be part of that conversation with Goldie and now with Merkaz,” said Solomonov, who was born in Israel and raised in Pittsburgh. “Come for cheesesteak, stay for sambich and schnitzel.”

Merkaz is open for breakfast, lunch and dinner. In the morning, it will serve coffee and traditional Israeli breakfast dishes like hummus foul (hummus served warm with fava beans and an haminado egg); eggs in pita with yogurt, chopped salad and za’atar spices; and shakshuka, the North African dish of eggs baked in a spicy tomato and pepper stew.

In the afternoon and evening, Merkaz will serve pita sandwiches, hummus, salatim (cooked vegetable salads) and Gazoz, the popular Turkish soft drink that comes in flavors like lemon-cardamom and celery-coriander. To-go, family-style meals will also be available, such as entire rotisserie chickens with hummus and salads.

Pita sandwiches on the menu include chicken schnitzel; shawarma-spiced cauliflower and rotisserie lamb; and Jerusalem grill (chicken hearts, turkey breast, tahini and pickles). Solomonov is most excited for the sabich sandwich, which is based on an Iraqi Jewish dish and contains fried eggplant, slow-cooked eggs, tahini, amba (pickled mango sauce) and chopped salad.

Merkaz is co-owned by Steve Cook, who is Solomonov’s partner in CookNSolo, the restaurant group that also operates Zahav, Abe Fisher, Dizengoff, Goldie, Federal Donuts and K’Far, which opened this fall. (Merkaz’s chef is Henry Morgan, who comes from Dizengoff.) In early 2020 the restaurant group will open Laser Wolf, a skewer house and bar.

“The last year and a half really taught us that there is room to grow, but you can overstretch,” Solomonov said. “Being a little bit disciplined about how we do it is important. It’s all risky and it’s all crazy and you have no idea what is going to happen when you do these things. We’re just trying to do it one restaurant at a time.”

Solomonov’s restaurants thrive in Philadelphia, but have not fared as well elsewhere. The team opened Dizengoff and Federal Donuts in New York and Miami, but they closed. The chef believes diners in Philly appreciate his work because they care about quality, not hype, and he isn’t being redundant. He’s telling very concise stories with each of his properties; he isn’t selling falafel in seven places.

“There are so many different ways to have a meal and there’s so many aspects that I don’t think people touch on,” he said. “Picture eating breakfast in the South versus what eating a New England dinner is like. There’s just so many different kinds of nuances and facets that make up meals here in the U.S.—it’s the same thing in Israel.”

To Solomonov, Israeli cuisine is as diverse as the ethnicities and nationalities that call the country home: Middle Eastern, Palestinian, Bedouin, North African, Eastern European, Jewish and Balkan, among others. The culinary traditions here are being created in real time, and the chef has plans to translate even more parts of the cuisine in the future.

“There’s definitely other aspects of Israeli food or Jewish food in particular that I think we can elaborate on, but right now we’ve just got a lot,” he said. “Eastern and Central European Jewish cuisine has almost no accurate representation here in the U.S. When you think of Jewish food, you really think of post-World War II in North America. We sort of lost the pre-World War II cuisine in like Hungary. The way Hungarians treat the goose, almost like we do the pig, how they treat the fat and the curing. That hasn’t really been expressed yet in the States.”

But for now, he’s going to focus on making and keeping the ones he already has great destination restaurants.

“There’s something really wonderful about being able to touch all your restaurants in a day, walk to them,” he said. “And it’s really gratifying to have New Yorkers come to Philly to have dinner. I love it.”