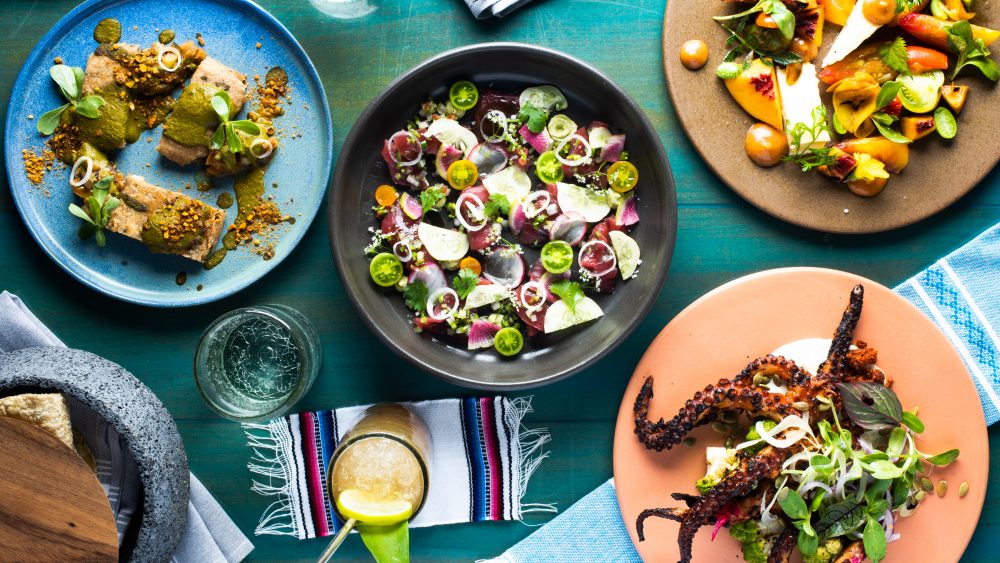 As a young boy growing up in Los Angeles in the 1980s, Ray Garcia could often be found at a carniceria. Strolling through the Mexican meat market with his family, he’d likely be carrying a brown paper bag, shining with spots of grease. Shoving his hand inside to pull out a pork chicharrón and gnaw on the fatty bits of meat has remained an indelible food memory for him.

Decades later, as he prepared to open his contemporary Mexican restaurant Broken Spanish, he wondered how he could bring the childhood favorite to his menu. But simply replicating the greasy pork rinds of his youth with better ingredients didn’t feel like a challenge. “They’re really great, but is this the best I can do with that dish?” he remembers thinking. “I want to present it in a way that excites someone like they’re having it for the first time.” So the chef applied the skills he’d learned at such fine restaurants as the Peninsula Beverly Hills and Fig to reimagine chicharróns. The result is an unctuous slab of house-cured crispy pork belly perfumed with garlic and lovingly dressed with microgreens. “We’ve taken a classic and moved it along.”

Garcia is not alone. Up and down the Golden State, chefs of Mexican heritage are embracing the country’s cooking, while also not allowing themselves to be hidebound by either tradition or stereotypes about what Mexican food should be. The chefs are merging seasonal ingredients, their childhood memories, high-level technique, and creativity to show Americans that Mexican food deserves a place among the world’s great cuisines.

The emergence of Broken Spanish in Los Angeles, Cala and Californios in San Francisco, Taco María in Costa Mesa, and El Jardín in San Diego required a cultural shift to take hold before they could open. The creatives behind them were able to ride a growing wave of inclusion in professional kitchens. While chefs of color still don’t get as many opportunities to lead big-ticket restaurants as white chefs do, their horizons are brighter than in the past. “Our realities are very different than our parents’ and grandparents’ in this country,” Garcia says. “We were able to be heard, to work our way out of the back of the kitchen, and to speak the language of business so we could get investors.”

Coming up in the industry in the aughts, Garcia had the chance to hone his craft and run Fig at the Fairmont in Santa Monica, while Taco María’s Carlos Salgado worked under Daniel Patterson at the Michelin-starred Coi in San Francisco. Yet those credentials weren’t enough to make Mexican fine dining happen. Even as these chefs ascended in celebrated kitchens, the path to culinary success still ran through restaurants serving Eurocentric food. There had to be another change in the culture of food—in the mind-sets of chefs and diners alike. That transformation finally arrived in this decade. “The trend in food now is to turn toward your own roots—your ingredients, your flavors,” says Gabriela Cámara of the seafood-driven Cala. “It’s about losing the fear of appreciating comfort foods that are close to your heart.” That’s what Cámara has done, taking the seaside snack of raw fish mixed with citrus atop a crisp corn tortilla and proudly serving it in an upscale setting. “In the past, you wouldn’t have seen a tostada on the menu of any halfway decent Mexican restaurant. It wasn’t a refined food. You’d get them on the beach.” Cámara’s reimagined tostada—made with trout, avocado, fried leeks, and chipotle mayo—balances acidity, spice, saltiness, and fat. “It represents what modern Mexican food is now.”

California’s perch as the country’s leader of contemporary Mexican cuisine owes a lot to its citizens. Roughly 12 million of the state’s nearly 40 million inhabitants are of Mexican heritage. That population has helped casual eateries and taco trucks proliferate. “Cooking Mexican food in California, you start off where people have a wider knowledge and acceptance of the flavors and spice,” Cámara says. That familiarity has allowed the chefs to take the training wheels off because they’re serving a populace that will grasp the source of their creativity.

Yet, Californian diners’ comfort with Mexican food can cut two ways. Some people don’t want to deviate from their set expectations of the cuisine when they go out, to the frustration of chefs. “We’re more than just tacos, burritos, and chips and salsa,” Claudette Zepeda-Wilkins of El Jardín says. “I don’t want to dumb down what we do for the sake of sales.”

And even as these chefs approach Mexican food as haute cuisine—investing in higher product and labor costs—they still cannot charge what French restaurants do. “Our food is older than French food,” Zepeda-Wilkins says. “It’s just that we were a Third World country, so it’s not put on that level.”

Instead, they must battle the attitude that their food should be cheap. “I’ve overheard a customer in the restaurant say, ‘$14 for a tamale? That’s crazy!’” Garcia says. “People see Spanish words or names of Mexican dishes and they assign value for what you pay for a tamale from the lady around the corner instead of what you pay for four ounces of grass-fed lamb, in-season mushrooms, corn, and someone rolling the tamales fresh. We’re still a lot less expensive than what our French or California cuisine counterparts charge for similar ingredients.”

Despite the pushback these chefs faced early on, there’s a growing appreciation for what they’re doing and a willingness to pay for it. “We’re in a much different place than we were four years ago, when people would literally pick up the menu, put it down, and walk out,” Garcia says. And since opening, accolades have poured in: Californios has earned two Michelin stars, and Jonathan Gold, the acclaimed late food critic, crowned Taco María the LA Times Restaurant of the Year in 2018.

Having established their restaurants, these chefs are looking forward to training others who will eventually go off on their own to create yet more contemporary Mexican restaurants, pushing the craft even further and changing perceptions beyond the plate. “People think Mexican is cheap, crappy food. But now Mexican can be super sophisticated,” Cámara says. “That gives people a cultural pride we didn’t see even just a few years ago.”