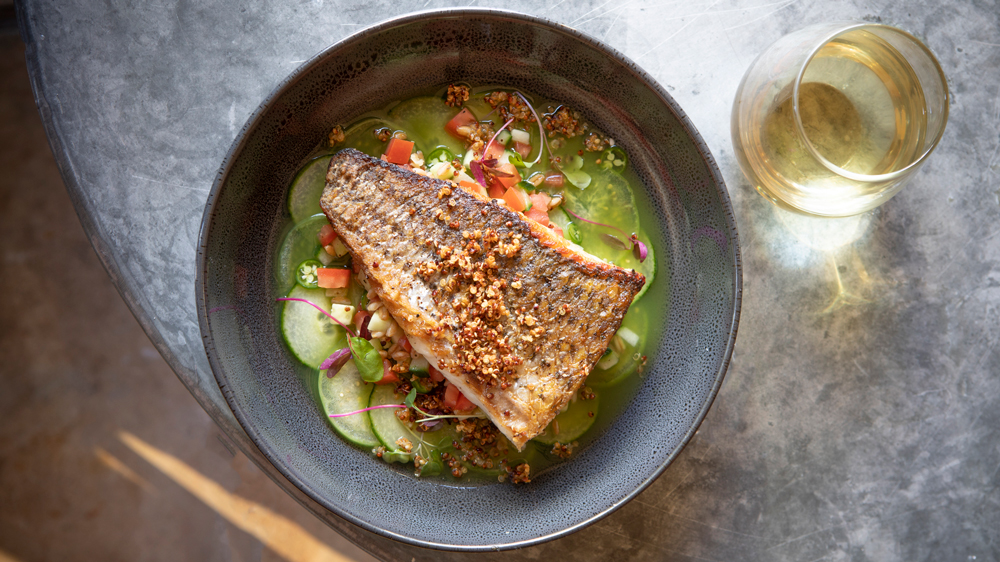 From traveling trucks plying addictive vampiros to family-owned dining institutions specializing in Oaxacan cuisine, Los Angeles’ legendary Mexican food scene is as vast as it is delicious. And that scope seems to expand nearly every day with the opening of yet another must-try restaurant. But what’s perhaps most exciting about these recent launches is that they’re adding something rarely seen in much of the city’s menus: Mexican wine.

Old-world-looking restaurant Mirame, which opened in Beverly Hills in July 2020, has gained a lot of buzz for its Mexico-obsessed ethos. Rosarito-native Joshua Gil, who helped lead Joe’s Restaurant in Venice to a Michelin star more than a decade ago, has been wowing guests with unexpected, playful dishes that feature some global influences thanks to Gil’s travels but are at their core largely Mexican, like the salmon-skin chicharron with a fermented garlic aioli or an indulgent tostada layered with blue-fin tuna, uni and paper-thin truffle slices.

For a long time, a Mexican restaurant in the US, eager to complement the fruits of its kitchen with the appropriate beverage menu, might opt to sling as many margaritas as it can. But for Mirame they took a different tack. “We want the drinks to run parallel to what Josh Gil is doing in the kitchen, which is to showcase the flavors and ideas of Mexico,” says bar manager Bryant Orozco, who previously helped lead Madre to build one of the largest mezcal lists in the country. “Our bar is not just agave spirits—there’s Mexican whiskey, gin, rum, even liqueurs. So why not continue to showcase all that Mexico has to offer with the wine, too?”

At Mirame, the wine is up there with the tequila and mezcal.  Photo: courtesy Mirame

Orozco recalls that when Mirame first opened, the wine list consisted only of a handful of bottles from Valle de Guadalupe. And they weren’t always an easy sell to guests, many of whom didn’t even know that Mexico produced wine. “Beverly Hill has a bit more of a conservative palette so serving an all-Mexican wine list was definitely a very radical idea during those first few months,” says Orozco, who used this as an opportunity to successfully educate some Angelenos on the breadth of south of the border winemaking.

Today, Mirame stocks 27 bottles, most of which still come from Valle but now also represent other parts of Baja California as well as other states in Mexico. There’s a NV Terra Mädi sparkling from Queretaro and a Cabernet Franc from Anclados, a boutique winery from Valle de Parras in Coahuila. “We just celebrated our one-year anniversary, and people are much more receptive to Mexican wine than when we first started,” Orozco says. “There’s actually demand for it now, and we’re starting to see more people seek out the wine. We’ve even added orange and chilled reds categories to our selection.”

On a lush rooftop at the Arts District, Mexico City transplant Cha Cha Cha, which officially started receiving reservations in April, has been riding this growing interest in wine from their motherland to shape its ever-evolving list. Like at Mirame, there wasn’t much Mexican wine on the menus Cha Cha Cha opened with; a couple were mixed into a more global lineup of mostly California and Spanish bottles. But after speaking with guests and seeing what best resonated with their taste, the number of Mexican wines has now risen to 10 bottles.

“There’s definitely a lot of curiosity with consumers,” says Cha Cha Cha sommelier Brett Luevanos-Elms. “People may have read about Valle de Guadalupe, but haven’t tried the wines, and having a broad selection of wines from there, at a mix of price points, makes it an easy entry point.” The options do come exclusively from Baja California; there’s the shockingly fuchsia blend of Grenache and Zinfandel that makes up the rosé from Vinos Pijoan, and, one of Luevanos-Elms’ favorites, Casa Magoni’s Manaz, a zippy blend of herbaceous fiano and floral viognier that pairs exceptionally well with chef Alejandro Guzman’s jicama salad, a little tart thanks to the tamarind vinaigrette.

The Grove has been threatening to launch Alma for months now. It’s a massive restaurant project from Grupo Hunan, one of Mexico’s most prolific hospitality agencies. When it finally opens its doors, 35 percent of its wine list will hail from Valle de Parras and Valle de Guadalupe. A Nebbiolo from lesser-known winery Xolo as well as the Casa Grande’s shiraz will show off the intense, full-bodied reds that you see a lot of in Mexico’s warm wine countries. In Santa Monica, Socalo, a canteen-style concept from the Border Grill team, has also curated an entirely Mexican wine list, which includes the lightly oaked Plan B Chardonnay from Bruma, a stunning winery overseen by Lourdes “Lulu” Martinez Ojeda.

Other trendy dining rooms, including Enrique Olvera’s Damian and the Instagram-friendly, Baja-inspired Caravan Swim Club inside Hotel June, have Mexican wines in their beverage programs, too, proving that there’s never been a better time to partake of vino Mexicano in Los Angeles. And this surge is likely a reflection of how popular Valle de Guadalupe has recently been among American travelers and oenophiles. Tasting rooms there are often flooded with weekend visitors driving down from California or flying in from New York and Miami. And once you’ve had a taste, it’s only a matter of time before you start craving it when you’re tucking into your next taco. And if you’re in Los Angeles, at least now, you’ll know where to go.