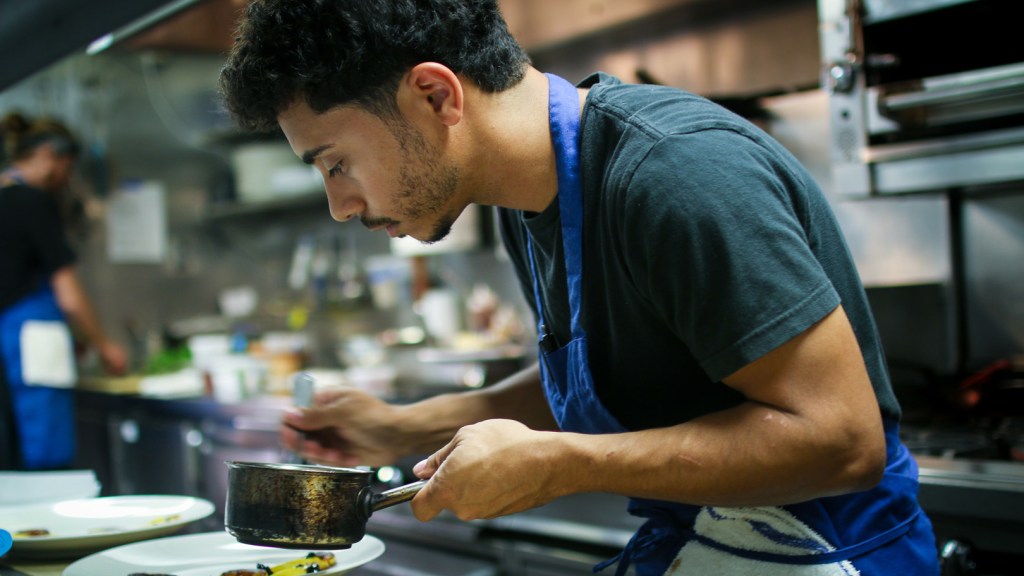 This story starts where all profiles of chefs a certain ilk begin: at the farmer’s market. The chef in question, Miles Thompson, plucks a sugar snap pea from an overflowing bin, tastes it and—betraying his age—gets excited enough to stride back behind the stall to another group of cooks, eager to have them try it. He comes back to the front to grab more, and when someone he knows passes by, he tells them they need to try the peas. Miles likes the peas.

The truth is, he’s not the only chef at the Santa Monica Farmer’s Market each week. Far from it. But for Thompson, this isn’t just a place where he shops for seasonal produce. This is the site of the job interview that secured him nearly two years ago—when he was only 28 years old—the executive chef post at one of America’s legendary restaurants, Michael’s. His creative cooking has reinvigorated this icon of California Cuisine, and now he’s about to get his moment in the national spotlight. Next week Thompson heads to Chicago to the Oscars of the food world, the James Beard Awards, to see if he’ll be crowned America’s Rising Star Chef.

A few years ago, a James Beard nomination wasn’t front of mind. Thompson was running an illegal restaurant out of an apartment on LA’s east side. Inspired by the underground supper club Wolvesmouth, the then 23-year-old Thompson left his high-ranking position working for two of LA’s hottest chefs Jon Shook and Vinny Dotolo. Despite his youth, Thompson had already clocked more than two years at Nobu. “I learned how to cook there,” he says. “From fish and meat butchery to cooking meat properly, to seasoning, knife cuts, how to work clean, even sharpening my knife—all the rudiments of cooking happened there.” From Nobu he went to Shook and Dotolo’s Animal, and eventually rose to executive sous chef at Son of a Gun. But he had an itch he needed to scratch.

“I wanted to write my own menu. I didn’t know how I was going to do it, I just decided I was going to give notice and figure it out,” Thompson says. “I could do this. I could make a restaurant. I could hustle that hard.” The Vagrancy Project was born.

On Fridays and Saturdays, starting in his one-bedroom Hollywood apartment with no dishwasher and a tiny refrigerator, he served 12 people a nine-course meal. “We’re going to go to the market, get this food, prep all week, make playlists based on the menu, and then just blow it out and have this amazing experience for people,” he says. It started with friends coming over and Thompson asking for a donation. He served dishes that expressed his eclectic take on food, like poached red mullet in hibiscus broth with burnt pickled cucumbers; a farmer’s cheese with meyer lemon, white chocolate smeared on the plate and crudités on top; and “this frat boy dessert, which was raw cookie dough with brown butter bavarois, and pickled blood orange.” The breakthrough for the dinner series happened when a friend of friend attended one weekend and happened to be Jeff Miller from Thrillist. The subsequent write-up flooded them with around 8,000 emails requesting reservations. “Boom, it was on,” Thompson says.

After six months of exclusive dinner parties, the Vagrancy Project started doing pop-ups inside Echo Park’s Allston Yacht Club, which paved the way for Thompson to open a proper restaurant not long after.

Allumette started as a shared-plate restaurant and later morphed into serving a tasting menu-only spot. “It was avant garde, not in a way that’s like molecular gastronomy with clouds of smoke and all that crazy stuff,” Thompson says. “Avant garde in the sense that the flavor combinations and ordering of the menu. There could be a meat course first, then fish, then vegetable.” And though the style of food he put out was quite different from Alinea in Chicago, Grant Achatz had a profound influence on him. “I remember getting the Alinea cookbook when I was a line cook, and reading it all the way through like a novel,” he says. “The way he thought about food. There are no rules here, just make delicious interesting food.”

Despite critical love—Bon Appetit named it one of the country’s best new restaurants in 2013—it couldn’t sustain itself, shuttering in 2014. He headed north to cook in Sonoma, and then in St. Kitts. After a few years away, he plotted his return, putting out feelers for positions in LA and getting word from friends that Michael’s was looking for a new chef.

Michael McCarty created his eponymous restaurant in 1979, eight years before Thompson was born. “Michael’s is huge,” says Andrew Friedman, author of Chefs, Drugs and Rock & Roll, which chronicles the creation of modern American restaurant culture. “If you were to do a family tree of great cooks coming from California restaurants, it would be Chez Panisse, Stars, Spago, and Michael’s.” That lineage includes Jonathan Waxman, Nancy Silverton, Sang Yoon, and Brooke Williamson. It helped establish California cuisine, ushering in an era of farm-to-table cooking, that was more stripped down than the French-driven fare happening in New York at the time.

But a few decades in, the old place started showing its age. In 2012, McCarty announced he was rebranding the restaurant as a “modern-day, moderately priced American/California brasserie.” The restaurateur implemented changes, hoping to enliven the icon. While the setting, with its lush, tree-lined garden, remained beautiful, the food was largely uninspired. McCarty needed to shake things up again.

Thompson and McCarty set a time to meet along with Michael’s son Chas, but the interview didn’t happen in Michael’s. They ventured a few blocks down, to one of the country’s best farmer’s market—that of the irresistible sugar snap peas—and the McCartys walked away impressed. Thompson didn’t just know one or two farmers, he had built relationships all up and down the market in pursuit of what each did best in that moment. And Thompson clicked with what he heard in return.

“I liked their vibe and they were interested in doing something new and breaking the mold of what Michael’s was in the past,” Thompson says. “They wanted me to do my thing—which is progressive style of cooking where I’m not just doing fish with a seasonal veg, maybe there’s a burnt component, or a strangely flavored oil, or blueberries with the fish. But no matter how avant garde or esoteric, it’s delicious.”

He wouldn’t get to do his thing immediately. McCarty wanted him to come in and not touch the menu for the first month. He needed to observe, familiarize himself with the team, and feel out the clientele. He found out things he wouldn’t know otherwise, like that the restaurant sold a lot of octopus. It allowed him to think about the restaurant and the space before he unleashed his new menu.

Dishes like the classic chicken stayed on, and he wanted to always have a well-executed steak there. But his voice is coming through clearly. What he’s doing is the next iteration of California cuisine—one that’s focused specifically on Los Angeles, and its own unique, multi-cultural style. “LA is so diverse with so much good food in the city. There’s Thai town, Koreatown, Little Armenia, Chinatown, Monterey Park, Little Ethiopia. Like, whoa, mind blowing,” Thompson says. “The tenets are the same with sourcing locally and letting the ingredients sing, but Modern California cuisine in Los Angeles can’t help but be influenced by the immigrant community. So, we have a lot of those inflections in the menu now.”

With dishes like pork collar with radish kimchi, and octopus with Sichuan peppercorn marshmallow, the buzz around the restaurant has grown again. Last year Thompson was a semifinalist for Rising Star Chef at the Beards, but he was almost too in the weeds to appreciate it. “I was being pushed to the limit in every aspect of my life. There were nights where there was me and two other people cooking dinner, cleaning up, and leaving at 2:30 in the morning,” he says. “That’s not a wild story for anyone whose cooking for a living, but I worked every day the restaurant was open. It was like a dream state of manic work.”

With this year’s nod, where he’s a finalist for a Beard, he’s been able to reflect a little more. “It felt different. I felt more assured in what I was doing,” Thompson says. “I’ve always said that I cook for a living, and 90 percent of the time I still will, but if someone asks me what I do, I’m finally comfortable calling myself a chef.”