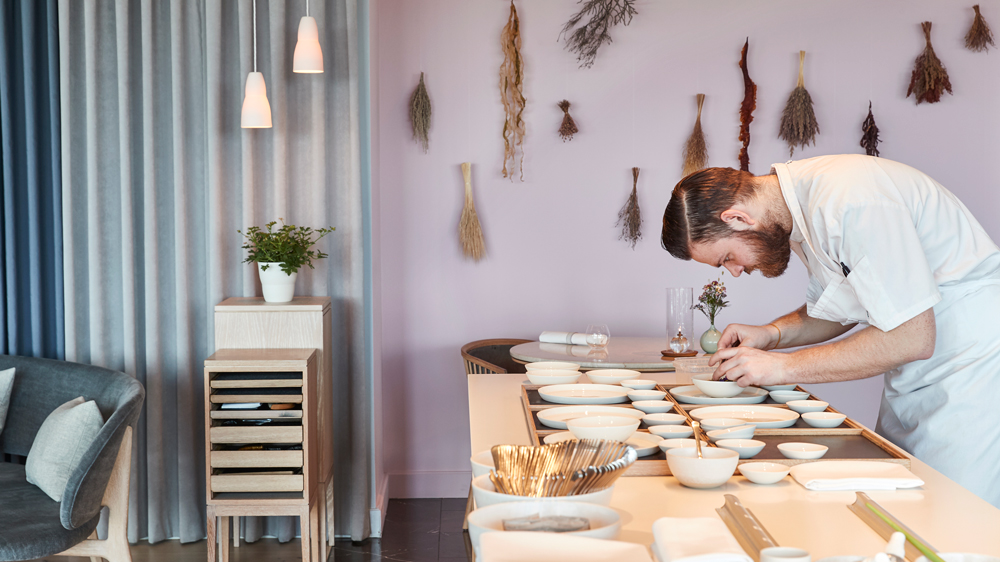 Even through his customary placid exterior, Rasmus Kofoed’s excitement was evident. He was on his way to a local farm in Denmark to pick up purple asparagus to cook. Not for his girlfriend and three kids—who the acclaimed chef has been cooking for exclusively since March—but to test out a dish for his restaurant Geranium, which also happens to be among the best in the world. He’s in the midst of adjusting recipes, rethinking service and regathering staff. Because this week he’s not reopening for takeout, or doing a pared-down burger, this Michelin three-star is getting back to business as usual. Well, mostly.

Denmark has already begun the process of emerging from Covid-19-induced hibernation after it acted swiftly and stemmed the tide of infections in the country. While restaurants in Copenhagen like Noma and Amass are starting with a more stripped-down service and menu, Geranium will resume the fine dining it offered before. Because it hosts diners from around the globe, the restaurant ranked No. 5 on last year’s World’s 50 Best list could face difficulty with Danish borders still closed. So along with reopening for dinner, Kofoed with his general manager and business partner Søren Ledet, will simultaneously open Angelika, a lunchtime-only, plant-based restaurant that has a lower price point.

Geranium is located inside a soccer stadium, sharing the building with the Danish national team and FC Copenhagen. The restaurant opened in 2007 and moved to its current location in 2010, perched on the eighth floor of the stadium where sunlight streams in to the airy, open dining room. In a city where New Nordic cuisine and Noma-adjacent restaurants have proliferated, Kofoed’s food feels more modern European with cleaner lines in both the food and decor. He’s a technically brilliant chef, and despite his outwardly calm demeanor, has the kind of determined streak that has made him the only person to win gold, silver and bronze at the culinary Olympics, the Bocuse d’Or.

In March, before the order came down from the Danish government to close the restaurant, Kofoed and Ledet ceased operations voluntarily. In the interim the chef spent time on a small island with his family, exploring nature and cooking with his kids while his girlfriend, a lawyer, was staying busy with work.

He didn’t fear that Geranium would never reopen, but he was concerned about how he’d manage once it did. The government paid 75 percent of his employees’ salaries and an undisclosed portion of his rent. “That only happens until you’re open, then you’re on your own,” Kofoed says. “I wondered how many guests will be in the restaurant because normally we are fully booked with tourists at that time.”

To bring diners back he knew he needed to make them feel safe. He’s adhering to guidelines set down by the government like increased cleaning protocols, access to hand sanitizer for diners and distancing measures where there needs to be a meter between all guests, which is easy for him because the dining room’s current configuration mostly conforms to that rule already. What’s more difficult is that part of Geranium’s charm is the tableside flourishes. For the time being, they will not be allowed to sauce and prepare dishes at the table, so some of the theater will go away.

For the staff, Kofoed and Ledet have built additional bathrooms for them, and will also routinely check them for and send them home at any sign of illness. One thing staff will not do is wear masks. “I don’t want to go to a restaurant where they wear masks, because I’m there to feel relaxed and not be reminded of going to a pharmacy or a hospital,” Kofoed says. “We’re following the restrictions of the government and they’re not saying we should.” While here in the States many municipalities are requiring masks, the Danish Health Authority actually recommends against them, with a long explanation on its website about why the organization questions their efficacy. Conversely, a study by the University of New South Wales in Australia aggregated other researchers’ findings and while not conclusive, the authors believe masks may be protective.

The science on masks is still not clear. However, because the Danish government has been largely effective in battling Covid-19 from a health perspective and economically, a sense of trust has grown between its citizens so that restaurateurs feel confident in following the guidelines that have been laid down.

“We are fortunate to live in that little country with not so many people and a government that really takes good care of everything,” Kofoed says, before taking a pause then continuing, “Yeah, not everything, but they are helping and they know they need to support restaurants financially because that’s an investment in the future.”

The other way Kofoed and Ledet are bringing people back is to open a second restaurant. They’re converting their “Inspiration Kitchen,” which is a space on the same floor as Geranium in the stadium, into a 30-seat plant-based restaurant named for Kofoed’s mother Angelika, who is vegetarian. He’ll serve a multi-course menu family-style with dishes like creamy butter beans with toasted pumpkin seeds served with a mix of raw and grilled vegetables to dip in it; new potatoes cooked with olives, pickled lemon and black pepper; and toasted bread with seeds, caramelized onions and herbs.

“I started a plant-based diet five months ago and it feels great,” Kofoed says. “I was inspired to teach people to cook healthy, plant-based food at home, so that’s the mission with Angelika—but also to keep employees busy, otherwise I have to let them go and I don’t want to do that.  So I thought how can we keep them and get inspired and also inspire other people?” After eating at Angelika diners can buy the recipes for 50 DKK (around $7), with all proceeds going to a nature preservation foundation. Along with Geranium being largely booked through August, all of Angelika’s reservations have been snatched up already.

It’s an indication that his desire to do a restaurant like Angelika was well founded. Kofoed has long wanted to do this project but never found the time, until the quarantine gave it to him while also providing him a new perspective. “A virus can shut down everything around the world and you’re isolated and everything is taken away from you except nature and your family and that encourages you to live a life to get the best out of it,” Kofoed says. “So I wanted to turn this time into something constructive and creative.”