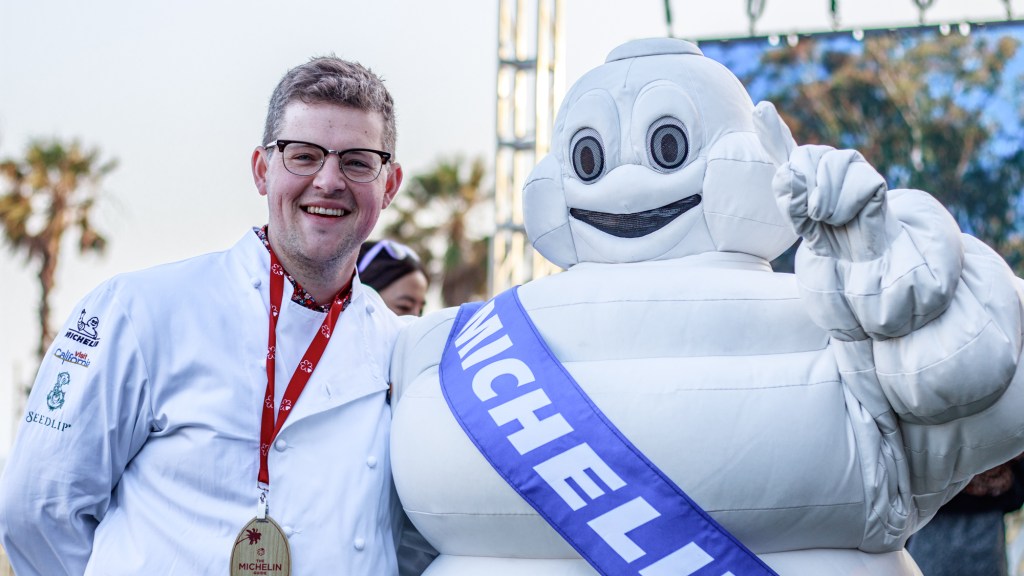 Set against a picturesque background of palm trees swaying in the breeze and the sun setting on the Pacific, the Michelin Guide officially returned to Southern California Monday night. At an event in Huntington Beach some of the state’s—and world’s—best chefs gathered to hear the tire-company-turned-gastronomic-bible announce which restaurants across the entire Golden State would earn Michelin’s coveted stars.

While no new restaurants ascended to the rarefied ranks of three Michelin stars, Saison fell down to two. Just like how Coi lost its third star when Matthew Kirkley departed, Joshua Skenes’ Saison will have to prove itself again now that Skenes has handed the restaurant he founded over to Laurent Gras to run.

That meant the biggest winners on the night were the restaurants that notched two stars for the first time. When Niki Nakayama of the LA modern kaiseki restaurant took to the stage after earning two stars she was the most effusive when discussing what it meant to her. “We have 20 people on our team—we’re so small—and 13 of us our women. That we have a culture that’s inclusive of women is something I’m proud of,” she said. “California is such a wonderful place, our restaurant couldn’t exist anywhere else but here. California is a state of dreamers.”

“I’m biased, but I think Aitor is one of the most creative chefs in the world right now,” Andrés told Robb Report. “I love that he’s been on my team for over 10 years and I’m happy to see him express his creativity at Somni. Somni means dream in Catalan. Both Aitor and I grew up in Catalonia, we believe in the American dream and that’s why we called it Somni, and this is a dream come true.”

This was the first time Michelin rated restaurants throughout the Golden State. Citing the produce and sustainability of Californian chefs, the Gallic guide’s executive director Gwendal Poullennec touted the reason why the organization would cover the whole state like it would an entire European country. Of course, great produce is nice, but the $600,000 California’s tourism board paid Michelin to subsidize production of this California guide surely didn’t hurt either.

Along with the beachside setting, at the event Michelin laid on the California iconography pretty thick, to the point that everyone’s credential on their lanyard was shaped like a surfboard. To which one newly minted one-star chef remarked, “They know not everyone here surfs here, right?”

The guide first came to California with its San Francisco guide, which it has published since 2007. That region has become America’s fine dining capital, with seven restaurants now boasting three stars, the most of any of the four regions Michelin rates in America. Michelin had abandoned Los Angeles nearly a decade ago after only a couple years rating America’s second largest city.

“I think Michelin was never supposed to leave LA. Whatever business decision they made years ago, I’m happy the reconsidered and came back,” Andrés says. “When I opened in LA, it was a very personal bet. I love LA, I thought it was one of the most exciting cities anywhere in the world to eat.”

Since San Francisco recently had stars announced in the fall, the real focus on the night was mainly with Los Angeles. The one-stars ranged from Italian with Nancy Silverton’s Osteria Mozza to Jon Yao’s Taiwanese-American Kato to Ludo Lefebvre’s French Trois Mec. However, notably absent among the list of LA winners were Korean, Thai and Filipino restaurants despite many great places throughout the city.

Rustic Canyon in Santa Monica’s inclusion among the one-star group is a testament to Jeremy Fox, who ran it for years before recently handing the executive chef position over to Andy Doubrava. Fox had first gained fame for leading vegetarian restaurant Ubuntu to a star a decade ago, before his career stalled out not long after. He worked hard to regain his footing and has since made Rustic Canyon a consistently excellent place for farm-to-table California cuisine.

There wasn’t all good news for California cuisine icons. Wolfgang Puck’s modern steakhouse Cut earned a star, but his flagship Spago, wasn’t so fortunate. The last time Michelin handed out stars in LA, Spago had two stars, but it curiously received none this time around. It’s not the only head-scratching decision from Michelin of late.

A week ago, Michelin released its Bib Gourmand list for California. This is supposed to be essentially a cheap eats guide showing you where a diner can get an appetizer, entrée and glass of wine for under $40. However, that definition seemed to be exploded entirely when outstanding restaurants, like David Chang’s Majordomo, Ray Garcia’s Broken Spanish and Steve Samson’s Rossoblu earned that distinction instead of getting stars, despite not fitting that price criteria. It seemed to be that Michelin was awarding consolation prizes instead of actually following its own guidelines.

“You may disagree with Michelin, you may not like Michelin,” Zabala says. “But you will still talk about it.”

Are you not entertained?  Photo: Jeremy Repanich