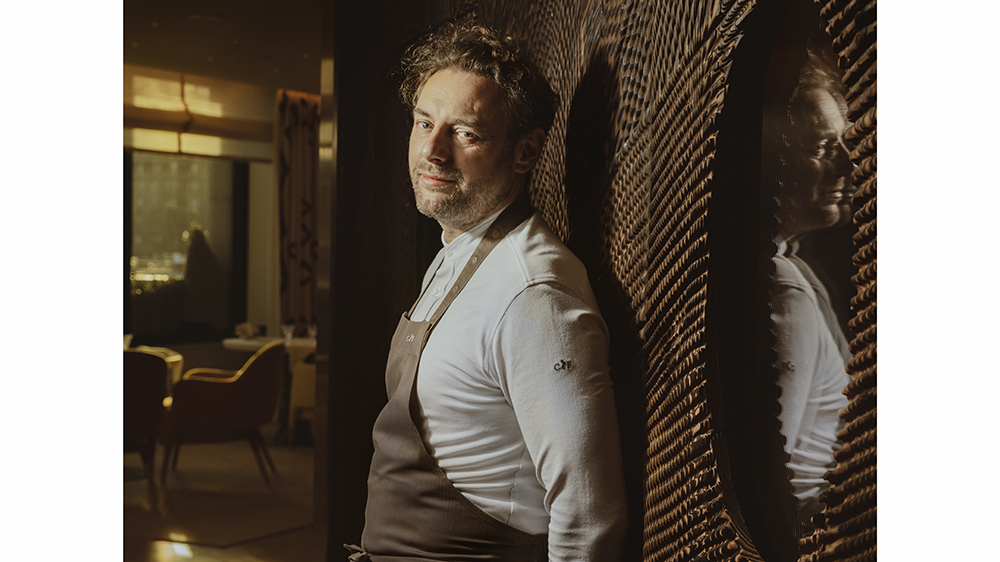 Chef Arnaud Donckele is describing the time he caught the wake of a passerby’s perfume and froze from the intoxicating headiness of it all. “Has that ever happened to you?” he asks from the cigar lounge at the back of Plénitude, located inside the five-star Cheval Blanc Paris hotel, across from the Pont Neuf, which opened last fall as the first LVMH-owned property in the French capital. Without waiting for an answer, the chef goes on to recount the moment when that lingering scent so overwhelmed him with emotion he was forced to stop and regain his senses.

Donckele, 44, is talking about sillage, the invisible aroma trail left behind by a perfume wearer. At Plénitude, the chef works like a perfumer, seeking to evoke the range of emotion aroused by a unique scent, but through his own medium: sauces. Aromatic broths, infusions, creams and veloutés are the stars at Plénitude, with each dish featuring its own pairing: Fish, langoustines and chicken act simply as “condiments for the sauces,” he says.

Seasonal peas and beans served with a sauce of shellfish juice infused with jasmine and elderberry.  Richard Haughton

Diners are advised to taste the accompanying sauces first, which are presented in various clever serving dishes, including a miniature copper watering can. “We want them to understand the depth and richness of a sauce in its natural state first,” Donckele says. “Afterwards the act of chewing will elevate the flavor.”

The concept is a major departure from La Vague d’Or at Cheval Blanc St-Tropez, where Donckele earned the restaurant three Michelin stars in 2013 for his Provence-centered menu. But that restaurant is also where, after creating a vinaigrette composed of warm ginger, herb-infused mandarin juice, grapefruit and lemon zests and mandarin olive oil, Donckele began his obsessional journey concocting sauces. The recipe is now featured on the seasonal Paris menu—a six-course Symphony option starts at around $450 per person—accompanying fish and vegetables.

“Today I feel like less of a chef, more a saucier,” Donckele declares. Because while there are only so many ways to cook a fish or roast a piece of meat, concocting new bouillons and consommés offers the chef a creative outlet in which nothing is duplicated twice, he says, in the same way that a single perfume imparts subtly distinct scents when worn by different people.

“You can use the same volume of water, the same amount of herbs, but it will never turn out the same. The taste will be different if the herbs spent two days in the fridge or were harvested in the morning or in the afternoon,” he says. “And I love that.”