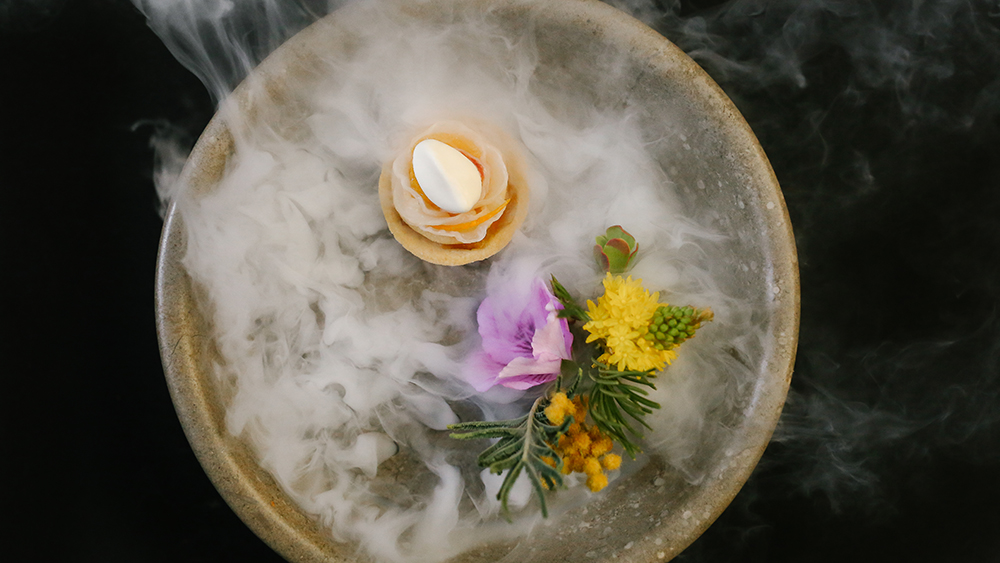 In June, after a pandemic-prompted hiatus, chef Daniel Humm reopened his famed Eleven Madison Park. But the Michelin three-star restaurant was… different. Missing were Humm’s career-defining dishes, such as honey-lavender duck and suckling pig confit, that helped land him at number one on the World’s 50 Best Restaurants list in 2017.

“It was clear that after everything we all experienced this past year, we couldn’t open the same restaurant,” Humm says. “We realized that, not only has the world changed, but we have changed as well.”

The way the restaurant sourced and served animal protein was environmentally unsustainable, he says, so he removed meat and dairy from the kitchen. Now his menu is filled with dishes such as tonburi (dried seeds from the Japanese kochia tree) cooked with seaweed and served, caviar-style, in a silver tureen over a bed of ice; on the side, diners receive lettuce cups filled with a puree of peas, miso and almond-and-lemon cream, for dolloping on the roe-like seeds.

“All this has given us the confidence to reinvent what fine dining can be,” says Humm. “It makes us believe that this is a risk worth taking.”

While Humm sees his change of direction as worthy, others see it as an unprecedented gamble. Animal-free restaurants are often stereotyped as dull, and overlooked for accolades even as the demand for whole food, plant-based cuisine increases. Just one of the other 135 Michelin three-star restaurants in the world is vegetarian, and only three vegan destinations have been awarded a star. Meat, especially prime examples such as foie gras and Kobe beef, is still considered a universal symbol of luxury; carrots, not so much.

“Some people still love conspicuous consumption, and they’re dazzled by restaurants that use expensive ingredients,” said chef Amanda Cohen of Dirt Candy, a pioneering vegetarian restaurant on the Lower East Side in New York City. “To them, dining is a way to show their social status, and, in that world, vegetables seem like low-class food. The only vegetables they care about are truffles.”

Humm has precedents, of course. San Francisco’s Dominique Crenn removed meat from her flagship, Atelier Crenn, in 2017 and was awarded three Michelin stars for 2019; for 2020, when those awards were canceled, the Michelin Guide recognized her as part of its Green Stars initiative, which highlights chefs committed to sustainable gastronomy. And now, several high-profile openings and reopenings are in the works sans animal products, signaling a change in establishment chefs’ priorities in tune with consumer preferences for health and the environment. In June, London’s Gauthier Soho brasserie reopened with an all-vegan menu; it’s already mostly booked through the fall. And in a few months, Kyle and Katina Connaughton, the duo behind Michelin three-star SingleThread in Healdsburg, Calif. (and fellow Green Stars winners), will open a meatless concept near San Francisco.

“If there was ever a time to stray from your past as a restaurant, it was 2020,” says chef Steven Shockley of Ruffian, a wine bar in the East Village that went mostly vegetarian last summer. “The shutdown reset people’s memories and perceptions.” The long-term impact of Humm’s turnabout could be a recipe for change. He’s showing what’s possible at the very top of the industry, which may make other chefs reconsider what they serve in their own restaurants, as well as nudge organizations such as Michelin and 50 Best to reassess their narrow visions about what constitutes fine dining.

For Humm, at least, the change in direction hasn’t dimmed demand in the slightest. As of this summer, Eleven Madison Park is fully booked.