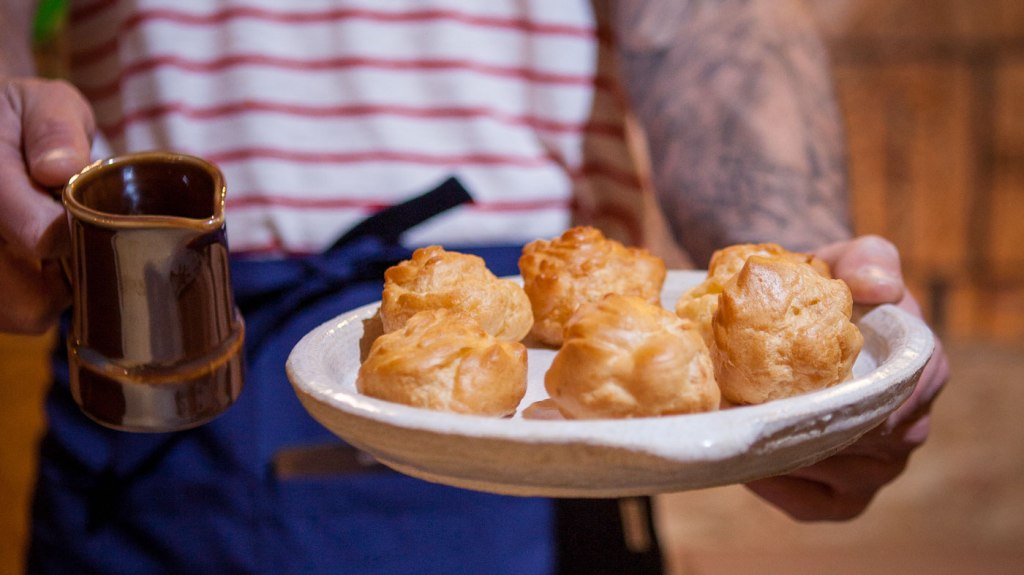 The picturesque city of San Sebastian, located in Spain’s Basque region, has become a global destination for foodies, and the two-Michelin star Mugaritz restaurant is one of the best among that area’s top restaurants. And now, for the first time, its luminary chef, Andoni Luis Aduriz, brings the flavors of Basque country to Angelenos with a pop-up at The Bazaar at the SLS Hotel in Beverly Hills.

Aduriz is showcasing dishes from his new concept, Topa Sukalderia, which blends ingredients and recipes from his native Spain with those of Latin America. Think mole sauce drizzled over tender profiteroles, where the mole is actually built from a piece of the one made at Mexico City’s Pujol that was given to Aduriz. His causa is a subtle and satiating blend of potato and dungeoness crab meat with lemon and herbs. And his tiradito, made with silky silvers of smelt soaked in vinegar with pickled peppers and a mild aioli, is an artful and original presentation that is all too easily gobbled up.

These dishes—and three others of Aduriz’s creation—are paired with another six from Bazaar’s chef de cuisine, Holly Jivin, for the pop up menu. Her kumamoto oysters topped with hibiscus foam are a lively combination of minerality and astringency with a dab of vanilla that provides a fresh roundness to the dish. Her octopus toast with avocado, tomatoes, serrano chilies, and sea lettuce is how we now want all of our avocado toast to come from now on.

Adruiz comes to The Bazaar to cook with his fellow El Bulli alum, Aitor Zabala, who is culinary director for José Andrés’ ThinkFoodGroup. Together the two are collaborating on an exclusive 18-course menu featuring the best of both Mugaritz and Saam, the private dining experience at The Bazaar. The reservation-only tasting menu is $250 per person (wine pairings are an additional $150) and taking place July 21 and 22. The dining series celebrates some of the last few days of Saam, which will be closing July 29 and giving way to a new José Andrés concept, Somni (which means dream in Spanish), in 2018.