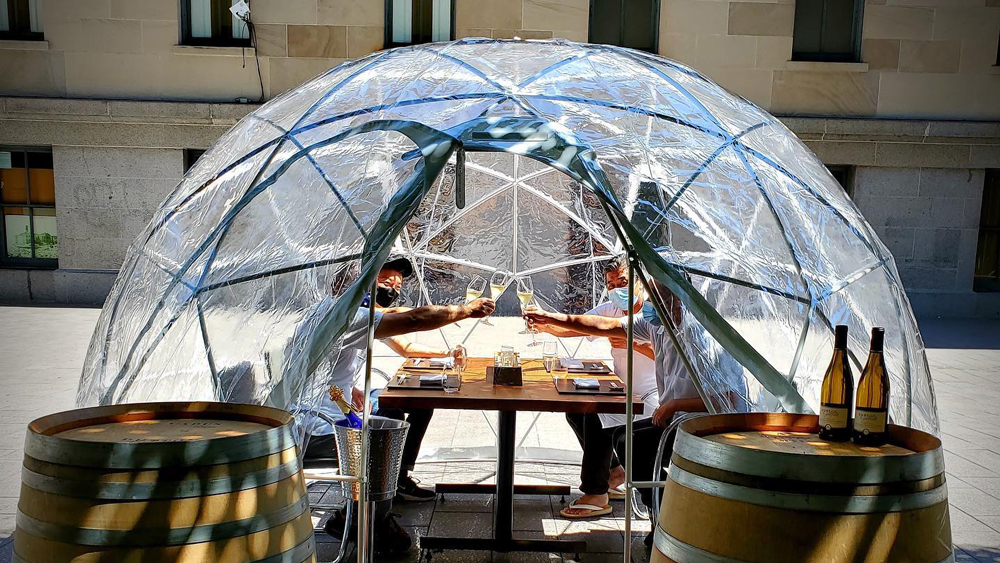 Try as some restaurants might, it’s hard to translate a Michelin-starred tasting menu to takeout. And yet, for months, many establishments deemed worthy of a star by the French tire company have tried to make do with a funhouse mirror of themselves. Admittedly, with excellent results in many cases, but they’ll be the first to tell you it’s not the same.

With the return of outdoor dining, tasting menu experiences can return as well. So places like Alinea are able to create a rooftop al fresco restaurant. But once summer passes and the weather turns, how will restaurants manage in locales with less friendly climates?

Well, a Michelin-starred restaurant has found a solution to deal with chilly San Francisco nights: a geodesic dome.

This week, three seven-foot-tall domes appeared on Mint Plaza outside Hashiri, a luxe sushi and kaiseki restaurant with locations in both San Francisco and Tokyo. The restaurant was inspired by similar domes they’d seen deployed in Amsterdam and Japan, so they dropped $1,400 apiece for three “Garden Igloos” as the manufacturer calls them.

Hashiri offers seatings at 5:00 and 7:30 each night and requires the first seating to leave after two hours so the restaurant staff has time to sanitize each bubble between customers.

However, it wasn’t just the weather that prompted Hashiri to purchase the igloos. “We wanted to continue offering the fine-dining experience—and safety and peace,” Matsuura told the San Francisco Chronicle. “Mint Plaza is a phenomenal space, it’s just sometimes the crowd is not too favorable.” The restaurant has also set up barrels and ropes to separate the bubbles from surrounding crowds.

That’s prompted a backlash from homelessness advocates. “It’s often hard to tease out whether the restaurant is responding to legitimate issues or the restaurant is responding to affluent diners who feel guilty about eating expensive meals in the presence of destitute people,” Jennifer Friedenbach, executive director of Coalition on Homelessness told the San Francisco Chronicle.

Nevertheless, the restaurant says the domes have been a hit with customers, so Hashiri is planning to purchase more while still offering takeout.