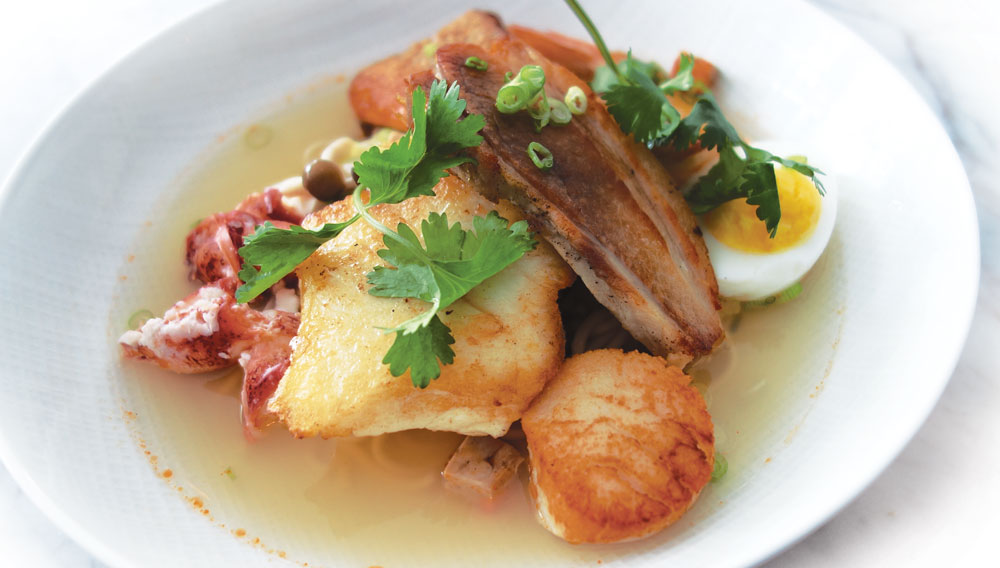 John Tesar built his repertoire of skills working with a variety of the country’s most touted chefs, including Anthony Bourdain and Rick Moonen. But when Tesar opened a new restaurant in Dallas in early 2012, he returned to his roots to focus on the type of fresh, sustainable seafood that he enjoyed while growing up in New York. “I wanted to sink my teeth into a project where I could have more design,” he says of his new restaurant, Spoon Bar & Kitchen (www.spoonbarandkitchen.com). “Seafood is what I enjoy cooking and what I enjoy eating.”

Though the restaurant’s menu changes regularly, patrons on any given night have a choice of dishes that collectively highlight almost two dozen species of fish. One of Tesar’s favorites is grouper, though he says it’s a challenging species to cook because its flavor is not pronounced and it’s exceptionally tender. “Seafood needs a light touch; grouper specifically, because it’s such a light fish,” he says. “I really enjoy putting it into Asian preparations and brothy dishes because it absorbs the flavors around it.”

According to Brad Murano, a Dallas food blogger, Tesar succeeds with his seafood ramen—a dish that spotlights numerous types of seafood (including grouper) along with pork belly and a slow-poached or hard-boiled egg, and it delivers them in an unctuous broth crafted around bonito flakes and kombu, an edible form of kelp. “You get the depth of flavor from the broth as well as the perfectly cooked seafood. It’s almost like a deconstructed omelet,” says Murano. “It’s complex and hearty, and it’s really a fascinating and brilliant interpretation of the traditional dish.”

At the Hot and Hot Fish Club (www.hotandhotfishclub.com) in Birmingham, Ala., Chris and Idie Hastings serve a variety of grouper preparations that change with the seasons, but all showcase locally grown produce and fish that’s caught only a few miles off Alabama’s Gulf coast. In fact, when the husband-and-wife team first opened the restaurant in 1995, it was one of the only farm-to-table establishments east of the Mississippi.

Tommy McGahey and his wife have a standing Friday night reservation at the Hot and Hot chef’s counter. They often order the grouper, especially during summer tomato season, when Chris and Idie pair the fish with an heirloom tomato, avocado, and grilled Vidalia onion salad topped with a basil-lime vinaigrette. “This dish is all about the vinaigrette,” Chris explains. “It’s extra limey and rich from the avocado.”

“It’s a simple dish, really,” McGahey adds, “but I think that’s some of the beauty of it. It’s something that we look forward to on the menu once the tomatoes are in season.”

Like the Hastings team, Frank Lee took to working with locally sourced ingredients long before the approach grew trendy, and as the executive chef of Slightly North of Broad (www.mavericksouthernkitchens.com) in Charleston, S.C., he combines classic French cooking techniques with Southern foods. Pamela Zaresk, a long-standing patron of the restaurant, says that Lee’s latest grouper preparation is a dish that she’ll order anytime she can’t make up her mind. The entrée features a pan-seared grouper fillet served with grilled tomato and an eggplant caponata puree, and is finished with a spring onion confit. “I don’t think I’ve ever had anything quite like this,” she says. “The spring onion confit added a little bit of crunch and a touch of sweetness, and the caponata was mild and smooth with a buttery taste. It was a really interesting and tasteful pairing, and it didn’t overpower the fish, which was perfectly done.”

Grouper may lend itself to upscale dining and classical techniques, but it’s not uncommon to find it served in casual restaurants as well. Nowhere is that more evident than in Clearwater, Fla., where the grouper sandwich is king. “The grouper sandwich is a Clearwater title,” says Lee Edelstein, a public relations executive who specializes in travel. “Everyone has their own version and puts their own twist on it, and everyone vies to have the best one.”

According to Edelstein, Frenchy’s (www.frenchysonline.com) sandwich is the most authentic, and of the restaurant’s five varieties, his favorite is the grouper Reuben. “It’s a better version of the [traditional] Reuben,” he says. “All the accoutrements take a mild fish and give it a more interesting flavor. Now the regular Reuben is boring to me.”

As autumn approaches, so does the hunting season. With that in mind, we’ll feature quail in the October issue. Have you had a memorable quail dish over the years? Tell us about it, and you could see that preparation on these pages in our next issue. Send comments to our editor at shaunt@robbreport.com or give him a call at 978.264.7565.