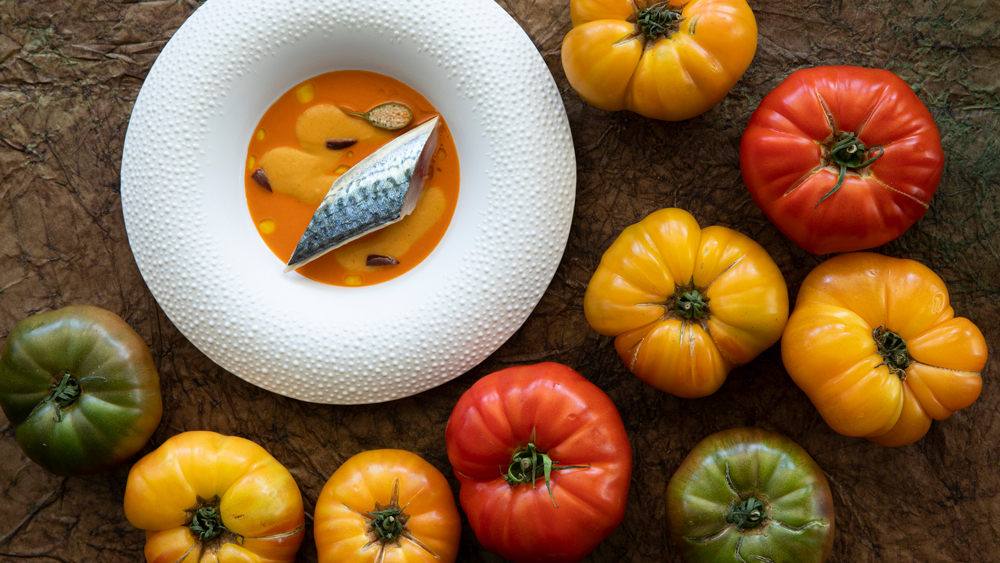 During the three-month lockdown in France, the chef of Mirazur, one of the world’s most highly regarded restaurants, took a step back and realized he didn’t like what he saw.

It’s a surprising confession from chef Mauro Colagreco, who was at the top of his game until the restaurant was forced to shutter in mid-March due to the global health pandemic. In 2019, Colagreco became the first foreign-born chef in France to earn three Michelin stars, and the French Riviera restaurant topped the influential World’s 50 Best Restaurants ranking.

But when Covid-19 hit France, the pandemic forced Colagreco to stop and slow down. After years of working at warp speed, the chef suddenly found himself at a standstill, forced to take stock of his life, of his restaurant; to do some serious soul searching.

“During the lockdown I had a lot of time to think,” Colagreco said. “Together with my wife Julia, we began to question everything. ‘What type of society do we want to live in? What kind of world do we want to leave to our kids? How should we be eating? Consuming? Working?’”

While stuck at home, the 43-year-old kept busy in the family garden, waking every morning between 6:30 am and 7 am to tend to the zucchini, tomatoes, strawberries, eggplants and herbs that needed his attention.

And it was here that he would come up with the idea to completely overhaul the restaurant that had turned him into an international, gastronomic superstar, and create an entirely new menu centered around the pillars of biodynamic farming and the power of the moon and the stars: Universe Mirazur. 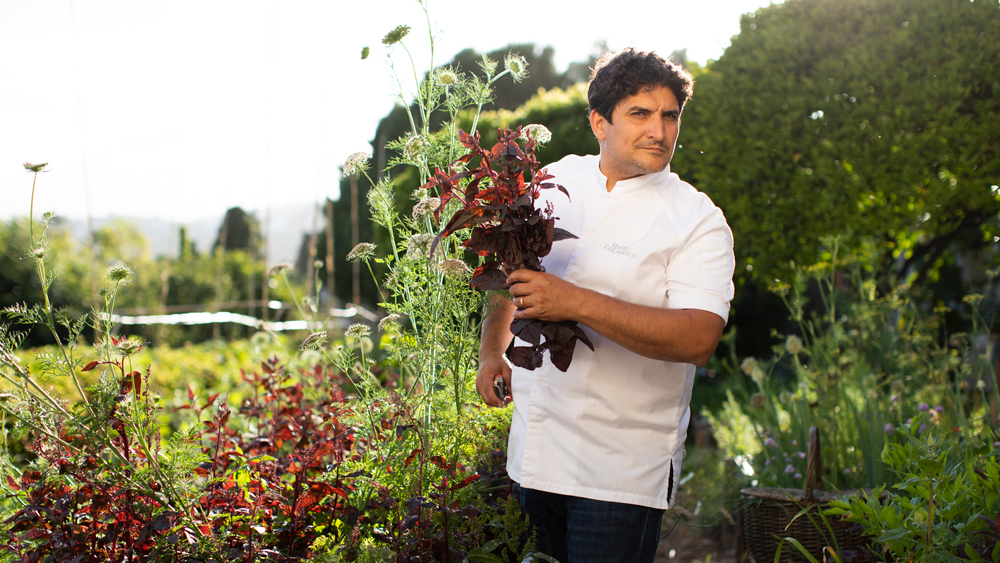 In biodynamic agriculture, plants are grown and harvested in accordance with the phases of the moon. Just as the moon’s gravitational pull can cause tides to rise and fall, it’s believed that the rhythms of the moon play an important role in the four parts of plant life: roots, leaves, fruits and flowers. The biodynamic planting calendar serves as a guide for farmers on the optimum days for sowing, planting, cultivating and harvesting the crops.

For Mirazur’s renaissance, which reopened June 12, these same principles are at the center of the new menu. On “leaf days,” when the “energy” and flavor are most concentrated in the leaf of the plant, the restaurant will serve a tasting menu themed around leaves and salad greens. Same goes for fruit days, flower days and root days.

“I spent a lot of time in the garden and felt really connected to nature. It became a source of peace for me at a time of so much anxiety,” he said. “That led my wife and I to rethink our restaurant model and make our gardens the center of the restaurant, and not the other way around.”

Overall, Mirazur is supplied by five organic and biodynamic gardens in the Menton area that total about 12 acres. Over the last few months, Colagreco has also been steering the restaurant towards greater sustainability. Earlier this year, Mirazur made a commitment to go plastic-free.

Colagreco knows he could have taken the easy way out and re-open the restaurant as it closed: one of the top restaurants in France with a months-long wait list. 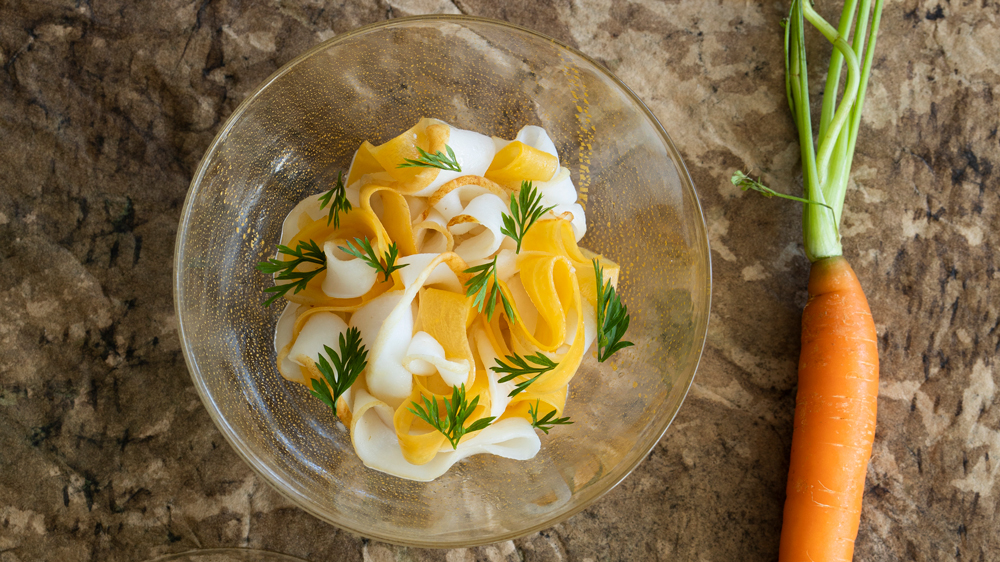 But throughout the lockdown, he says he became overwhelmed with anxiety, and fell into a dark funk that made him dread returning to the life he led before Covid-19. The restaurant made no sense to him anymore, he said, and he felt lost, anxious, uninspired.

“I couldn’t imagine reopening the restaurant as it was before. I lost all motivation. It was a really difficult time for me. But I knew that this was the time to mobilize and provoke change.”

Working in the garden served as a balm for the chef. He was working to the rhythms of nature, a concept he aims to impart to his guests.

The new menu is an ambitious project, which requires switching up the restaurant—from the food, decor to staff uniforms—every two to four days.

When guests arrive, they’re offered a pouch for storing their mask, and a small bottle of hand sanitizer. They’re then led to the restaurant garden for a pre-dinner apéro where they’re served amuse-bouches.

The experience continues inside to the dining room, where guests can dip their hands in individual earthenware bowls filled with hand washing and disinfectant solution and flower petals (or fruits, leaves and roots, depending on the day), an elegant way to satisfy post-pandemic hygiene codes.

Should they dine on ‘leaf’ day, one of the dishes, playfully named after the French dessert mille-feuille (which literally translates to a thousand leaves) features lamb confit served with layers of dried and fresh salad greens and seaweed—leaves of the sea. The result is a dish that highlights mineral and savory flavors and plays with different textures, the chef said. 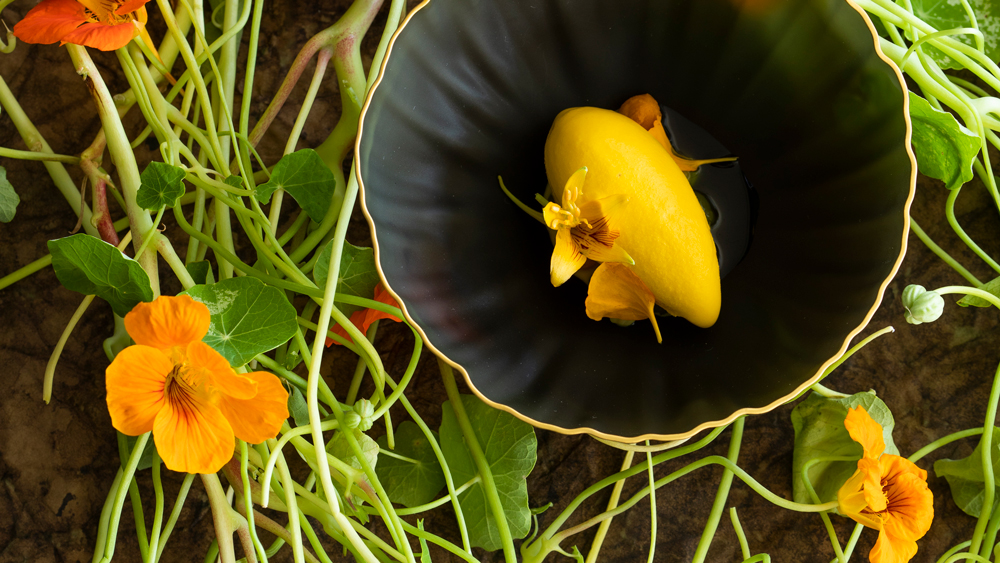 Colagreco wants to get his food closer to nature.  Photo: courtesy Matteo Carassale

Colagreco is one in a long line of fine dining chefs who have been forced (or gently nudged) to reinvent themselves in the wake of Covid-19. René Redzepi of Noma made headlines last month for partially reopening with gourmet burgers on the menu, while Alinea in Chicago pivoted to take-out.

Meanwhile, when asked if he worried that the reinvention of his restaurant would put his starred status in jeopardy, Colagreco said that wasn’t a priority.

“Our goal is not to be the best restaurant in the world but to provoke emotions in our diners and to cook with passion. Stars and awards help recognize our work but they’re not our ultimate goal.”

As for his take on the future of haute gastronomy in the post-pandemic world? Colagreco isn’t worried. Even with the closure of French borders (which reopens to select countries outside the Schengen area July 1) and Covid-19, the restaurant—serving a €260 ($291) menu—is booked solid through to September.