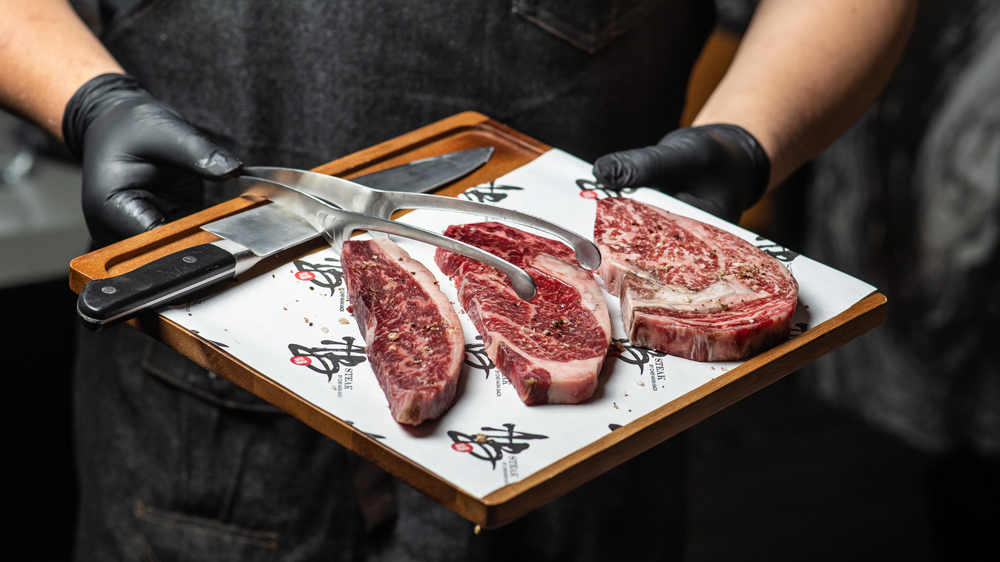 “We want to stick with our own identity rather than someone else’s,” LA chef Ki Kim says.

He’s referring specifically to the rise of modern Korean restaurants, but he’s also talking more generally about how the world has changed since he came to America 13 years ago, and how immigrants who strived to assimilate in the past are now proudly showcasing their own culture.

Kim, who cooked at two Michelin-star Korean restaurants Jungsik and Atomix in New York, opened Kinn in LA’s Koreatown last month. Kinn is part of In Hospitality, a new Korean-American restaurant group started by the team behind LA’s Hanchic. And Kinn has quickly found an audience for Kim’s new-school Korean food. After briefly serving an a la carte menu, Kinn switched to a five-course tasting menu. This happened, Kim says, because enthusiastic customers kept asking him to just send out a progression of dishes.

“The menu is very dependent on my nostalgia, but the technique and the flavors come from my career,” says Kim, who also previously worked at Matsuhisa in Aspen and Blanca in New York.

A mackerel dish that’s grilled over binchotan and served with fermented cucumber and sautéed mushrooms is inspired by something he used to make for friends with a gas burner when he was 18 and got fish from a mom-and-pop sushi restaurant he worked at in Denver. Kim plans to change Kinn’s menu every three months, but he’s constantly working on new dishes that might show up as supplements. One current supplement is uni with hen-of-the-woods mushrooms, a dish that’s creamy, oceanic, earthy, umami-packed and altogether luxurious. Another supplement guests might be able to order on any given night is octopus with herbs and a gochujang aioli.

“The supplement could be anything,” Kim says. “We go to the market daily. And when we see something that catches our eyes, we just grab that and work on R&D.”

For dessert, Kim is doing his whimsical version of the Korean ice cream known as the pig bar. There’s no pork involved; the ice cream bar came out in 1983, which was the Year of the Pig. Instead of making a bar, Kim deconstructed and upgraded the dessert: There’s burnt milk ice cream, a fresh strawberry coulis and a cookie crumble, all topped with a tiny pig made out of pie dough.

One thing about upscale dining, of course, is that little thoughtful touches can make a big difference, whether it’s a miniature pig pastry and Kim garnishing dishes with local winter tomatoes at Kinn or what empire-building chef Akira Back is doing in the dry-aging room at his Korean steakhouse in LA

At the Beverly Center’s ABSteak, which originally debuted in February 2020 and reopened this month after going dark during the pandemic, Back is dry-aging prime strip loins with Camembert cheese.

“Michelin is all about details,” says Back, who earned a Michelin star at Dosa in Seoul and is also known for his glitzy Yellowtail restaurant in Las Vegas. “Koreans love cheese. Everybody thinks the exact same thing, like, let’s just dip beef into the cheese. We looked at it a different way. We melt the cheese and put it on the beef and pet it gently. We do it again and again. When you grill it, it’s kind of crunchy and has the best flavors.”

ABSteak is also raising the stakes for Korean barbecue by serving Australian and Japanese wagyu, including ultra-premium A5 olive-fed wagyu from the Kagawa prefecture.

“A lot of people have asked me why I don’t do regular Korean barbecue?” Back says. “Why do I have to have olive beef? My answer is always, ‘Hey, listen, it’s not for everybody.’ I want people who come to our restaurant to really try different kinds of meat that they haven’t had with Korean flavors.”

Along with new restaurants like Hanchic, Tokki, Shiku and the forthcoming Yangban Society, Kinn and ABSteak are part of a movement to expand the range of Korean cuisine in Los Angeles, a city that already has the best and most vibrant Korean food in the country. It’s a movement that’s seen fits and starts, with street-food pioneers like Seoul Sausage and Roy Choi’s Kogi enduring while ambitious and excellent restaurants like Makani, Wolfdown and Baroo came and went. The beloved Spoon by H, which might be resurrected after closing during the pandemic, and David Chang’s Majordomo have also added a lot to the delicious conversation about what Korean food can and should be.

Kim, for one, has seen a voracious desire for modern Korean food in New York, and he believes LA is developing a similar appetite.

“In New York, a lot of people say that what’s happening with Korean food reminds them of sushi restaurants in the ’80s,” he says. “It’s booming. It’s really popular. There’s a huge demand and not much supply. We’re seeing that happen in LA now. A lot of chefs are going, ‘Hey, we should totally do this here, too.’”

Back, meanwhile, wants to do it everywhere he can. He’s opening an outpost of his Akira Back flagship restaurant at the opulent Prince de Galles hotel in Paris this month, and he’s also working on a new ABSteak in San Francisco and forthcoming restaurants in Florida, Italy, London and Riyadh, along with his existing spots around North America and Asia. He’s been fortified by seeing his restaurants reopen in Asia and do record numbers.

“With COVID, people have been waiting for experiences like this,” he says. “They appreciate it more now.”