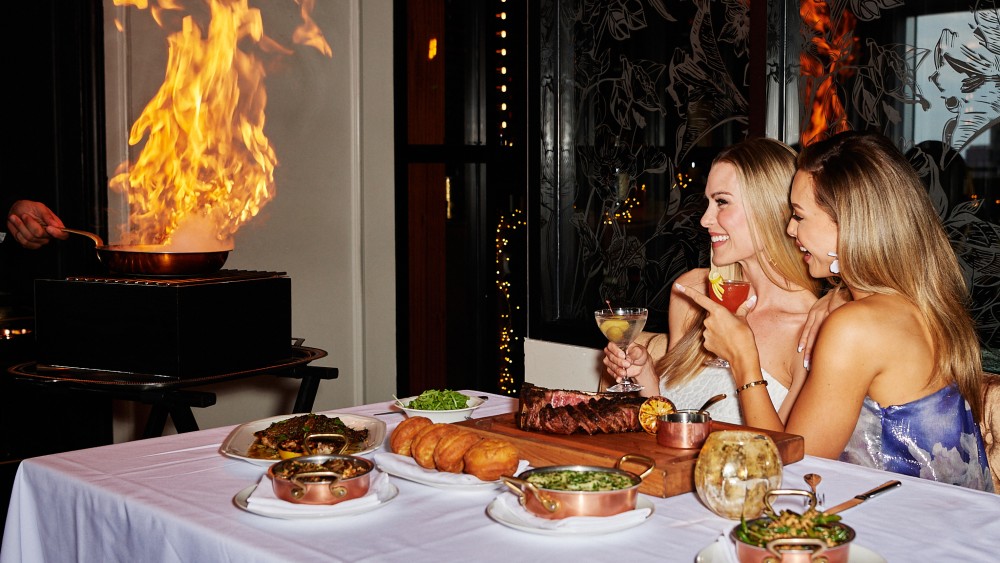 The $1,000 king crab feast at Monarch in Dallas comes with a show, but maybe not the one you expect.

At many high-end restaurants, including Angler in San Francisco (where the menu once featured a $1,540 king crab that had eaten 27 spot prawns that were unfortunate enough to have shared a tank with the predator) and Chinese banquet spots around the country, there are fish tanks where you can see and photograph wriggling crabs. At the seafood-focused Water Grill, which has grand outposts in Southern California and Las Vegas, guests have even been encouraged to hold a live crab. This, obviously, is a fun—if somewhat scary—thing to do for the ’gram.

But at Monarch, chef Danny Grant’s wood-fired Italian restaurant on the 49th floor of downtown Dallas’s new National development (which also includes residences and a Thompson hotel), nobody shows you the crab when you order it. And there’s no opportunity to pose for FOMO-inducing photos with a crustacean before you start eating. Instead, the nine-pound Alaskan king crab feast starts with two riffs on a crab cocktail: a truffle crab salad with griddled brioche buns for DIY sandwiches alongside a habanero crab salad with butter lettuce cups.

And then the tableside show begins. A cart is pushed to the table, a pan with olive oil and brandy is set ablaze and a server brings over a Dutch oven filled with rigatoni, crab cream sauce and lump crabmeat. The pasta is spooned onto the pan and flambéed, of course. It’s an over-the-top presentation that rises to the level of a Las Vegas dining spectacle—which is perhaps unsurprising, as some of the servers used to work at scene-driven Vegas spots like Hakkasan.

After the crab pasta, there’s a photo-worthy finish as the crab’s eight legs and two claws, glazed with a Calabrian jus and guajillo oil and basted with garlic butter in Monarch’s wood-burning oven, arrive at the table. As you’re digging into spicy, messy, luxurious crab, $1,000 might even feel like a deal during this supply-shock moment in time when king crab can cost more than $50 a pound at Costco (and much more than that if you pay retail in a seafood shop).

The theatrics are fitting for Monarch where, even on a Sunday night when many people are at home watching Will Smith slap the hell out of Chris Rock at the Oscars, the vibe feels like a huge night out. There’s champagne poured downstairs, before you get on the elevator to the 49th floor. There’s a dress code (collared shirts and no hats, please), big groups of young women sipping cocktails in colorful party gowns and equally big groups of young men flexing expensive watches and gym-rat physiques. There are older couples on dates, wearing statement jewelry and devouring pastas and gargantuan steaks.

The bar at Monarch  Courtesy Monarch

In a way, Monarch feels like the pinnacle of luxe life in downtown Dallas, except that Kessaku, Grant’s equally festive sake-and-sushi lounge, is directly above it. And there’s a lot more happening once you start walking around the downtown neighborhood, which is finally delivering on a much-promised dining renaissance.

At the Adolphus, the historic luxury hotel that’s a quick stroll away from Monarch, the Rodeo Bar, which originally debuted in 1981, has reopened with terrific smash burgers, habit-forming nachos and a fully loaded foot-long hot dog. Rodeo Bar is part of an Adolphus transformation led by hotel and food-and-beverage management company Makeready, which has tapped formidable chef Charles Olalia as culinary director. Also at the hotel is the grand French Room, a storied, 110-year-old fine-dining destination that will reopen its dining room later this year and is already serving caviar, oysters and pâté en croûte at its bar.

The menu board at the reopened Rodeo Bar  Steven Visneau

Across the street from the Adolphus is the Exchange, a bustling food hall that’s part of the new four-block, 300,000-square-foot AT&T Discovery District. At the Exchange, you can chow down on delightful loaded dandan tots at new-school Taiwanese-American chef Andrew Chen’s Monkey King Noodle Company before grabbing coffee at celebrity chef Amanda Freitag’s Rise + Thyme. At Rise + Thyme, the staff are eager to talk about how unimaginable this makeover of downtown Dallas might have seemed even just five years ago. While many locals are still skeptical that the neighborhood really has become a dining destination, they note that this feels like the moment when the ground is shifting—after all, Monarch and the Exchange just opened in 2021, and Rodeo Bar reopened this past January.

The AT&T Discovery District, which also includes ample lawn space where visitors can watch sporting events on giant LED screens, is designed to be a place where you can linger. Along with the food hall, there are busy restaurants like Jaxon, which serves updated versions of classic Southern food, like a chicken fried steak made with sourdough, and dozens of craft beers on tap.

Further down the street is the new location of high-profile Italian restaurant Sassetta at the five-star Joule hotel. (Sassetta’s former home, about a couple miles away in the Design District, is now inhabited by Major Food Group’s Carbone). The revamp of the Joule will also soon include an outpost of Various Small Fires, Esther Kim Varet’s art gallery that has locations in Los Angeles and Seoul.

This is all part of a walkable stretch that is aiming to attract hungry visitors, day and night. While Monarch wants to be a party-hearty restaurant “where celebration reigns” during extravagant dinners, Rodeo Bar just started serving lunch along with its dinner and late-night service; the Exchange opens at 7 am and stays open through dinner. Along with lunch, brunch, dinner and late-night service, Jaxon has a popular happy hour. So there’s no shortage of options for pre- or post-gaming around your $1,000 crab dinner.