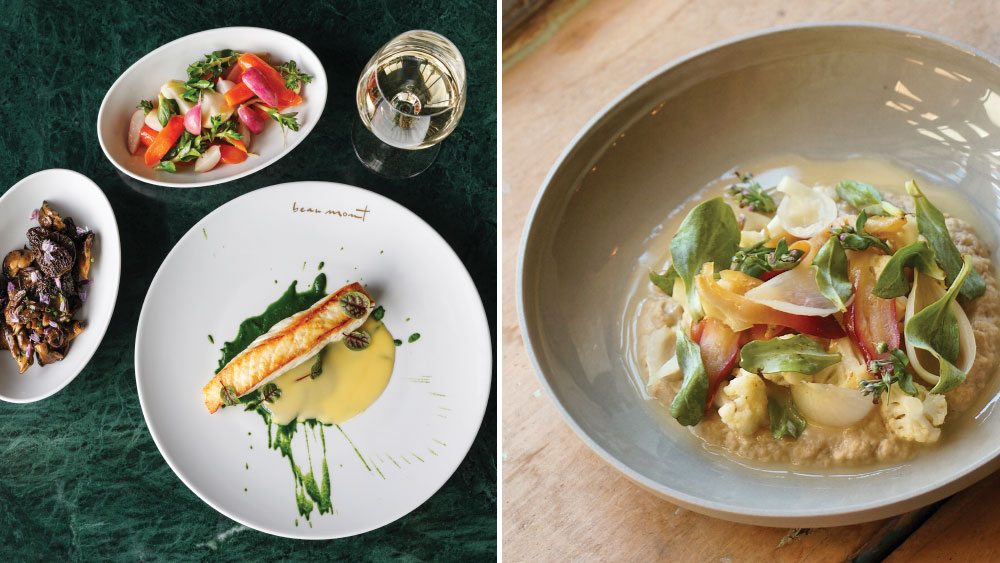 For years after Picard’s restaurant opened in 2001, Bourdain’s description seemed to embody the city’s entire dining scene, as well. Joe Beef, another renowned Montreal restaurant, was for years known for its meat-heavy menu, particularly the foie gras “double-down” sandwich with bacon, cheddar, chicken-skin mayonnaise, and maple syrup. But pure gluttony, was never the only goal, as these establishments firmly established a Quebec regional cuisine.

Newer restaurants, however, are using a lighter hand to create the province’s cuisine where local ingredients often take the starring role. But don’t worry—most of them still serve pork, duck and foie gras. Here are eight restaurants to try on your next trip to Montreal.

Christine Lamarche and Normand Laprise, co-owners of the legendary Toqué! on the edge of Old Montreal, opened this sleek spot with an open kitchen, concrete floors, and exposed ceilings, in the multicultural Parc-Extension neighborhood (Parc-Ex, for short). The menu is composed of simple dishes that highlight local products, particularly seafood. Think fresh halibut in saffron fish stock or cucumber stuffed with local goat cheese and sprinkled with marinated herring roe.

Cauliflower from the four-course menu.  Photo: Courtesy of Candide

Take a seat at one of the green leather banquettes at this Little Burgundy restaurant inside the former rectory of a 19th-century church and dive into a four-course, prix fixe meal. Chef John Winter Russell’s menu changes every month, but vegetables are always the focus. Dishes like chanterelles with cauliflower and mussels or homemade buttermilk yogurt with tart jam made from wild haskap berries and blue basil are on the subdued side.

French expat owns Inès and Guillaume named this restaurant, located on the main thoroughfare of Saint Laurent Boulevard in the lively Mile End neighborhood, for Canada’s iconic horned animal. The interior has a sort of cabin-in-the-woods theme that’s as rustic as the name, complete with a wall composed of wooden logs. The game and the seafood-heavy menu features seasonal Quebecois cuisine with French influences like maple-glazed duck legs and deer tartare with cranberries vodka, roasted corn, and marinated mushrooms.

Quebecois ingredients meet open-fire cooking at this restaurant inside the Angus Yards complex in Montreal’s vibrant Rosemont neighborhood. With tall windows and ceilings and a central bar, the fire pit in the open kitchen is the heart of the restaurant. Watch as chef Marc-André Jetté and his team turn out dishes like halibut with string beans, zucchini, kohlrabi, and chanterelle mushrooms or duck with artichoke and black currant.

The playful name of this basement restaurant hiding in a building on busy Saint-Denis Street comes from a famous French-Canadian story that dates back to the 19th century. It’s befitting the convivial atmosphere as laughter bounces off the brick walls and low ceilings. Diners tuck into dishes like beef carpaccio with confit potatoes and sautéed mushrooms smothered in cream and potato puree.

The menu, offering about 15 small plates, is as compact as the space at this chef-driven spot in the Mile-Ex neighborhood just beyond Mile End. Chef Aaron Langille favors elegant flavors that elevate local vegetables like celery root with green curry and beets with X.O. sauce and creme fraiche. The restaurant doubles as wine bar thanks to the list packed with biodynamic, natural and organic selections, as well as beer, cider, and a handful of cocktails.

Located in the Plaza St-Hubert shopping center, this restaurant looks like a standard French brasserie at first glance. But look closer and notice an upside-down dollhouse hanging from the ceiling and plastic dinosaurs perched on shelves. Chef Charles-Antoine Crête, known for his tenure at legendary Old Montreal restaurant Toqué!, takes a similarly whimsical approach to dishes like gratinéed whelks with miso butter.

Although it’s named for the prairie province, the ingredients at this hip Mile-Ex restaurant are all Quebecois. Owners Elisabeth Cardin and Simon Cantin take a particular interest in foraged ingredients prepared in the open kitchen of this industrial-meets-forest space. Below the cedar plank ceiling, diners feast on menu items like marjoram-perfumed duck hearts in cold mushroom broth, heirloom tomatoes with smoked beef fat, and seal prepared tataki-style.