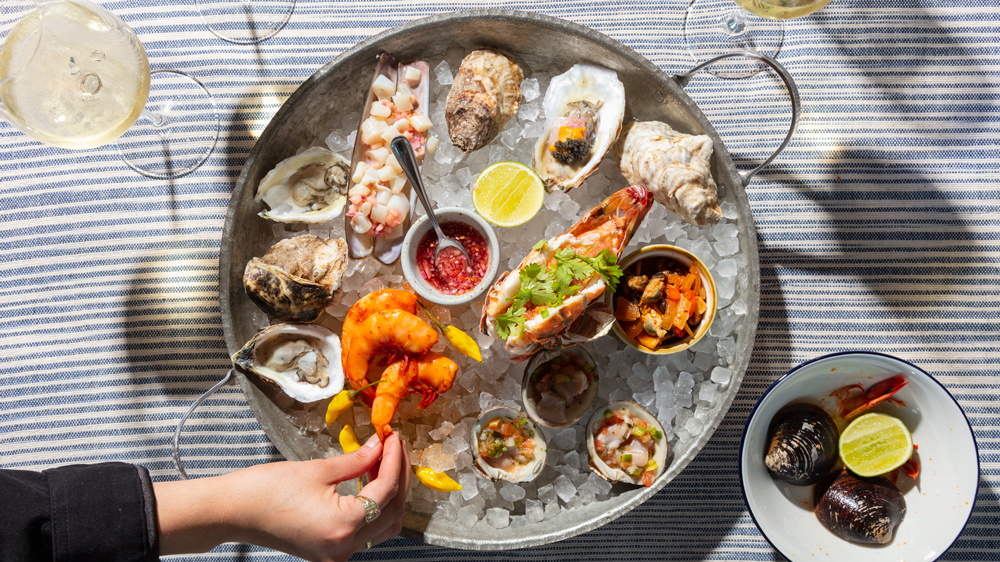 The Omicron surge notwithstanding, the restaurant industry hopes to bounce back in 2022, with a collection of banner openings across the country leading the way. There will be chefs expanding their respective footprints, others making triumphant returns and some going out on their own for the first time. From Haitian food in Portland, Ore. to yakitori omakase in New York City to Greek fare in the nation’s capital and a handful of other concepts in between, here are the restaurants we’re most excited to see open this year.

Ever since we got the opportunity to “preview” Gregory Gourdet’s Haitian concept Kann when he cooked it on Top Chef’s “Restaurant Wars” episode a few seasons back, we couldn’t wait for the full version. Last winter Gourdet offered a more fleshed-out versions to Oregonians with a pop-up restaurant inside yurts. The restaurant is inspired by what he ate growing up and his travels to Haiti to eat and learn from people there. “It’s a lot of Caribbean and African ingredients—a lot of root vegetables, lots of seafood, plantains, yucca, taro root, rice, beans, spicy chilies, coconut milk and all these tropical fruits,” Gourdet told Robb Report. “I really just want to make traditional Haitian food. I don’t want to fuss it up. I don’t want to modernize it.”

The former executive chef of Sweden’s only Michelin three-star restaurant, Frantzen, is heading for warmer climes to open Habitué in Los Angeles. Marcus Jernmark has joined forces with wine director Max Coane and chef Robert Sandberg for the new venture. Coane tells Robb Report they’re keeping details close to the vest at the moment, but the pedigree of those involved is enough to pique our interests.

It’s a homecoming, of sorts, for Daniel Rose. The chef who cut his teeth in Paris with tasting menu-driven Spring, and then brought his old-school French to New York with Le Coucou, grew up in the Chicago suburbs. He’s partnering with Boka Restaurant group to open a French restaurant in the Windy City this year. The details of the menu haven’t been released, but expect a bustling brasserie from the Michelin-starred Francophile chef.

Get ready for some elevated borscht and stroganoff in San Francisco’s Noe Valley. Moscow-born chef Anya El-Wattar is preparing her modern Russian restaurant Birch & Rye. As you would expect of a Bay Area restaurant, it’s taking those cultural touchpoints El-Wattar is so familiar with and looking at them through the lens of California produce.

Andrew Brochu had intended to open his own restaurant in Chicago after he left his post leading Grant Achatz’s hearth-driven Roister. The pandemic had other plans. After a space fell through and further delays, he and his wife left town for Savannah, where they intend to open the boisterous restaurant instead. Expect fried chicken and seafood with high levels of execution but low levels of fuss.

An intimate, 14-seat tasting counter will transport New York diners to Tokyo with a kappo-style yakitori omakase. Chef Atsushi Kono opens his eponymous restaurant off the Bowery after stints in Japan and leading the Michelin-starred Yakitori Torishin in New York.

Chef Johnny Spero of DC’s Reverie has cooked in some esteemed kitchens in his day, including Jose Andres’ Minibar and Rene Redzepi’s Noma. His newest spot will be inspired by his time cooking at Mugaritz in Spain. There, he experienced Basque nightlife, and with Bar Spero he wants to recreate that vibe inside his seafood-driven bar and restaurant that will include open-fire grilling and fresh shucked oysters.

At his pop-up experiment One Fifth, Chris Shepherd creates a new restaurant inside the same space each year, which has included steak and Mediterranean concepts in the past. He’s making a permanent home for the red sauce Italian menu that was a hit, creating the restaurant Pastore (Italian for Shepherd) where he’ll serve family style feasts that feature giants slabs of lasagna and more. The perpetually busy chef-restaurateur will also open Wild Oats inside the Houston Farmers Market, serving his take on Texas cuisine with the use of live fire via a grill designed by barbecue legend Aaron Franklin.

From culinary power couple Niki Nakayama and Carol Iida-Nakayama, the duo behind Michelin two-star N/Naka, comes N/Soto. The restaurant began during pandemic shutdowns as a place offering bentos to go. When it turns into a full-blown restaurant this year it will be an izakaya driven by California produce and cuisine.

After a brief-but-triumphant turn leading Gotham Bar and Grill, Victoria Blamey will now open her own restaurant for the first time with Mena. Since leaving Gotham Bar and Grill at the beginning of the pandemic, Blamey has started developing her new concept with residencies at Blue Hill at Stone Bars and at Fulgurances. Mena, located in Tribeca, will channel the flavors the Santiago, Chile-born chef has picked up on her global travels.

Michelin three-star SingleThread’s Kyle and Katina Connaughton are getting a little more casual with their new Sonoma restaurant. Little Saint will serve an a la carte, meat-free menu inside a Ken Fulk-designed space. Like with SingleThread, they’ll be inspired by the produce of the region that’s supplied by their own farm. The Connaughton’s restaurant, café and wine shop will anchor the 10,000-square-foot space, while the building will also host concerts, film screenings and community events.

Chef Fermín Núñez has packed in patrons at his acclaimed Austin restaurant Suerte. He hopes to repeat the feat at his new restaurant Este. Expected to open in the spring this year, he’ll be serving Mexican coastal cuisine that utilizes a charcoal-fired grill. Recipes will be inspired by time Núñez spent in Guadalajara, Ensenada and Puerto Escondido.

He’s back, folks. But really, Lincoln Carson didn’t spend that much time away from LA. After the pandemic-induced closure of his acclaimed Arts District restaurant Bon Temps, the pastry chef, who pivoted to tackle savory, ventured north to Santa Barbara wine country to open the delightful Vaquero Bar and Coast Range with his friends in Solvang. Now he’s opening a restaurant in Hollywood (right near Evan Funke’s brand new Roman-inspired Mother Wolf), where he’ll use local ingredients to put a California twist on French classics.

The two-time James Beard Award-winner is in expansion mode again in his hometown. The chef behind Spoon and Stable, Bellecour Bakery and Demi will launch an all-day, Mediterranean-inspired café inside the lobby of the new RBC Gateway tower downtown. And when the Four Seasons inside the building opens, Kaysen and team will run the full-service bar and restaurant there as well.

The Michelin-starred chef behind Masseria and Officina, Nicholas Stefanelli, will draw on his Greek heritage when he opens Philotimo. The pandemic caused construction delays, pushing the restaurant well past its original August 2020 opening date. But when it does arrive this October, the chef known for Italian fare wants to show denizens of the nation’s capital a side of Greek cuisine beyond feta, with dishes from different regions of the country.

When Sean Brock opened his five-course tasting menu restaurant devoted to Appalachian cuisine this past fall, he wasn’t done. The chef who created Husk, one of the most influential restaurants of his generation, is planning a more in-depth tasting menu at a space above Audrey to open early this year.

Young chef Jon Yao managed to get a Michelin star for his Taiwanese-American tasting menu fare, despite the fact the restaurant was located in a West LA strip mall and didn’t have a liquor license. Now, Yao plans to spread his wings and gun for more stars by opening in downtown, taking the space formerly occupied by M. Georgina.