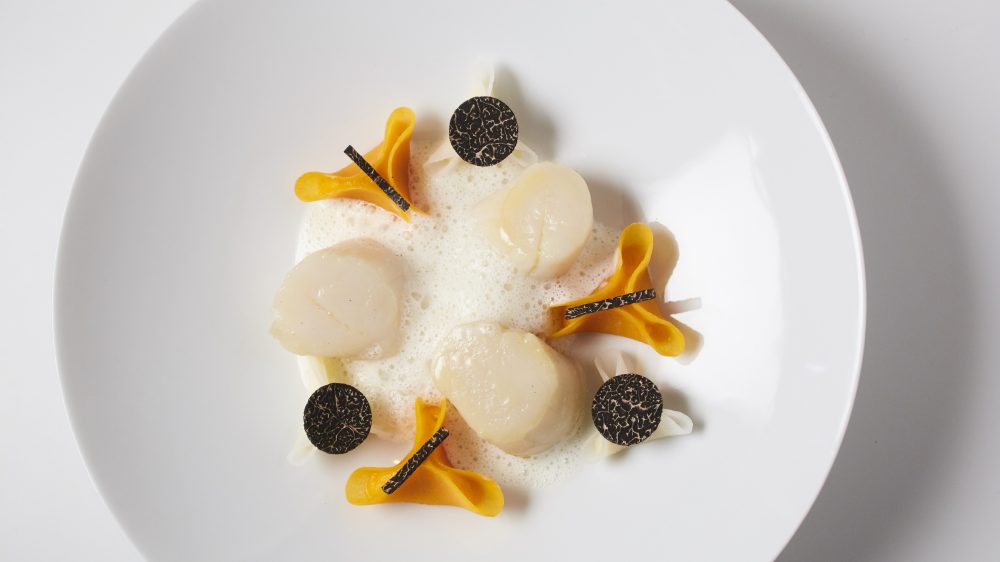 Go ahead and resolve to lose weight like everybody else; we’ll be here plotting out 12 months of spectacular eating at a host of new restaurants that are taking our palates to new places. Here’s a glimpse at the upcoming spots we’re looking forward to this year.

Named for the village of Menton, which sits on the border of France and Italy, Michelin-starred chef David Kinch’s new restaurant will lie at its own apex, serving French food with an Italian accent. Rumors of mortadella pizza from a brick oven are already making us hungry.

America’s classic French revival is far from over, especially because James Beard Award–winning chef Justin Devillier and his wife, Mia, are planning a bustling brasserie in the Big Easy. Their homage to Parisian dining will feature its fair share of decadent favorites, from raclette to foie gras torchon.

This is cheating a bit, because this development represents not one, but several restaurants. Manhattan’s new neighborhood is shaping up to be a culinary mecca as well, with this year’s openings including Thomas Keller’s Mad Men-inflected TAK Room, a reincarnation of David Chang’s Momofuku, and, most excitingly, a food hall led by all-time greats José Andrés and brothers Ferran and Albert Adrià of Spain’s much missed El Bulli.

When the stately Raffles Hotel reopens this summer after a nearly two-year restoration, Anne-Sophie Pic will be as much a draw as the new rooms. But her latest outpost won’t just be a carbon copy of what she does in Paris: Pic has been busy researching local produce and spices to weave Singaporean flavors into her contemporary French cuisine.

Jeremy Fox has made his reputation by cooking seasonal, vegetable-focused cuisine at Santa Monica’s beloved Rustic Canyon, but for his latest project, he’s looking to his Midwest roots to create a menu filled with twists on the unfussy comfort-food classics he grew up on.

After Jeremy Ford won Top Chef, the Jean-Georges Vongerichten protégé returned to South Beach to show off his technical prowess with Stubborn Seed. Now he’s preparing his follow-up with this stripped-down restaurant serving up a seafood-centric menu.

Virgilio Martínez and Pía León—the husband-and-wife duo from Lima’s award-winning Central—are heading to the Peruvian Amazon for their latest venture, an as-yet-unnamed restaurant that will dive deep into the region’s indigenous cuisine. The couple gets bonus points for authenticity and atmosphere: The only way to access the restaurant will be a boat ride down the great river.

After three years in a suburban strip mall, Dave Park and Jennifer Tran are ready to take their Korean fine dining to more sophisticated ground. At this restaurant in West Town, Park will lean on traditional ingredients from his upbringing in Seoul—but with more modern preparations.

One of 2018’s most anticipated openings never came to be. After years of planning, Jessica Koslow, the chef behind the groundbreaking Sqirl, saw her sophomore restaurant fail before it started. But lucky for us, she’s a tenacious one: This year she’s teaming up with Gabriela Cámara of Mexico City’s Contramar to create a Mexican restaurant with the Koslow twist of high acid and fermented flavors.

Straddling the line between genius and madness, chef Rasmus Munk is relaunching his experimental restaurant Alchemist in a 24,000-square-foot warehouse on the outskirts of Copenhagen. Come hungry—and with an open mind: His 50-course, nearly five-hour dinner won’t just feature food, but will move through multiple rooms to dine inside sensory experiences involving actors, LED screens, and art installations.

The Twin Cities’ James Beard Award superstar Gavin Kaysen is opening his third—and most ambitious—restaurant with this tasting-menu experience steps from his Spoon and Stable. A U-shaped counter with just 20 seats will offer front-row views to the kitchen where Kaysen will home in on ingredients of the Upper Midwest.