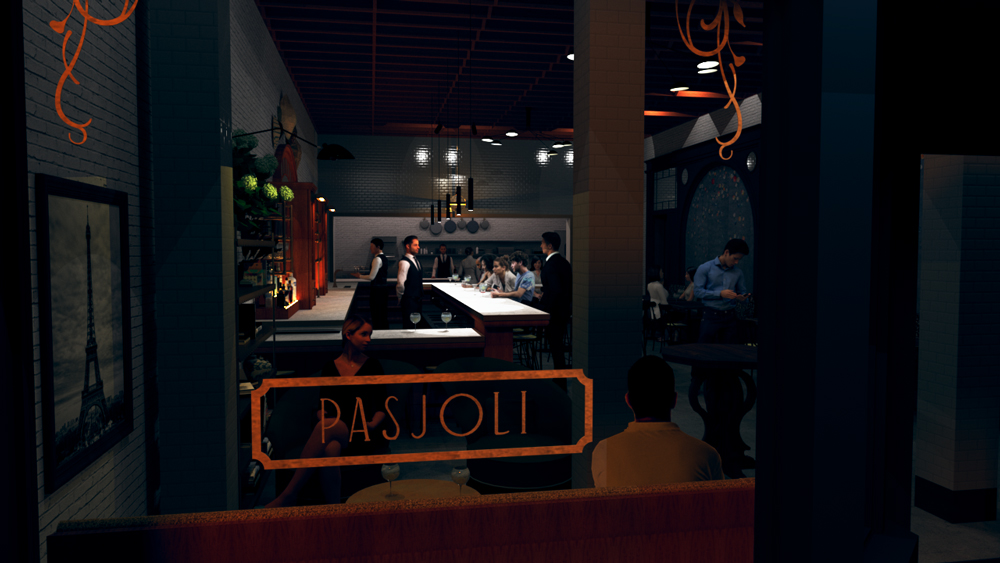 As the summer wanes, new restaurant season begins. Through the end of the year, we’re expecting great new places to eat from Michelin-starred chefs, James Beard Award-winners and some exciting newcomers to their respective scenes. Here’s a look at the 16 restaurants across America we’re most eagerly anticipating this fall.

After ditching New York City for the South, husband-and-wife duo Shuai and Corrie Wang started the hit Charleston food truck Short Grain in 2014. After years of looking, they’ve found a brick-and-mortar location for their new restaurant Jackrabbit Filly. The menu will lean on Shuai’s Chinese heritage, inspired by dishes his mother and grandmother have made. There will also be Japanese influences like his Japanese-style fried chicken.

You may get some of Gabriela Camara’s tostadas, but with a Jessica Koslow twist.  Courtesy of Cala.

One of 2018’s most anticipated openings never came to be. After years of planning, Jessica Koslow, the chef behind the groundbreaking Sqirl, saw her sophomore restaurant fail before it started. But she didn’t dwell on the setback long, quickly finding a new project on LA’s west side. This year she’s teaming up with Gabriela Cámara of Mexico City’s Contramar to create a Mexican restaurant with the Sqirl twist of high acid and fermentation.

Named for the village of Menton, which sits on the border of France and Italy, Michelin-starred chef David Kinch’s new restaurant will lie at its own apex, serving French food with an Italian accent. Rumors of mortadella pizza from a brick oven are already making us hungry.

The team behind James Beard Award-winning Zahav is in full-on expansion mode. Chef Michael Solomonov and business partner Steve Cook are opening three new restaurants in Philly in 2019. The first, debuting in July, was the all-day restaurant led by superstar young pastry chef Camille Cogswell (the 2018 James Beard Rising Star winner). Next up will be the sandwich shop Merkaz and by the end of the year, they’ll open Laser Wolf, a Zahav-like restaurant (modern Israeli) with a focus on skewers cooked over a charcoal grill.

The award-winning chef is opening in the Gwen hotel.  Photo: courtesy Paul Strabbing

After she closed the beloved Naha, James Beard Award-winner Carrie Nahabedian has stayed active. She still has Brindille and now she’s announced that inside the Gwen hotel, she’ll open Kostali in October, serving a blend of Southern Europe and North African cuisines.

The first-ever ramen joint to earn a Michelin star will make its American debut this fall. Chef Yuki Onishi will transport his noodle-focused restaurant from Tokyo to San Francisco. Every day in Tokyo people start lining up at his shop at 6 a.m. to get a coveted ticket that will secure them one of the 150 bowls of soba he makes each day.

A trio of alums from the America’s only Michelin three-star sushi restaurant, Masa, are teaming up for a hand roll-focused restaurant in the West Village. Taka Sakaeda and Jihan Lee will team up in the kitchen with Lisa Limb running operations for the 40-seat restaurant.

The chef behind the outstanding modern Mexican restaurant Broken Spanish, Ray Garcia, is pairing up with LA restaurateur Beau Laughlin to create a new dining destination in Downtown LA. Trademark will be a departure from what diners have come to expect from Angeleno-influenced Mexican cuisine at Broken Spanish. Garcia will cook the seasonal, California cuisine more reminiscent of his successful stint leading Fig at the Fairmont Miramar in Santa Monica.

Gotham Bar & Grill saw some of the greats pass through its kitchen—from Wylie Dufresne to Tom Colicchio. They served under chef Alfred Portale, a pioneer in New American cooking whose architectural plating style influenced a generation. Now, he’s left Gotham to take on his first solo venture since starting there in 1985. At his eponymous restaurant in Chelsea he’ll serve contemporary Italian with a little French technique mixed in.

Our favorite zenmaster of meat, Adam Perry Lang, opened his ode to aged beef last year with APL in Hollywood. Up in the Napa Valley, he’s building a new American restaurant inside the Groezinger Estate House. The market-driven fare will complement his dry-aging program that has him serving some of the country’s best steak.

This is a restaurant preview two-fer. At Southern Belle, Georgia-bred chef Joey Ward will create a cocktail bar focused on Southern distilleries and Southern food. But behind a bookcase there will be a secret passageway that leads to a 16-seat restaurant where Ward will explore Southern fare with a 10-course tasting menu.

Up and down the Golden State, Italian and Mediterranean restaurants thrive with a backbone of California product to drive them. Chef David Golovin’s next project—where he partners with Ravi Kapur and Jeff Hanak of Liloliho Yacht Club—will draw inspiration from Eastern Europe. Expect wood-fire cooking, fermentation, charcuterie and smoked preparations.

The expansive redevelopment in Downtown LA known as The Row is filling up with excellent food options. Tartine’s Manufactury anchored a huge chunk of real estate there, bringing a coffee roastery, bakery and two restaurants. Now, another San Francisco chef-restaurateur joins the ranks, as Michelin-starred chef Melissa Perello will open M.Georgina, serving California fare in the mold of her Bay Area restaurants Frances and Octavia.

Chef Travis Strickland has been at the helm of contemporary steakhouse Baltaire in the upscale LA enclave of Brentwood since it opened in 2015. After arriving in Southern California from Chicago, he took advantage of the perpetual sunshine to do a lot of backyard wood-fired cooking at his home. He’s taking that love of open-fire cooking to Phoenix to serve food with a Middle Eastern and Mediterranean influence.

After years under Alinea group in Chicago, Dave Beran headed west to LA to make his solo debut. His tiny tasting-menu-only Dialogue earned a Michelin star its first year eligible for the guide, and now Beran is planning to expand his restaurant offerings. At Pasjoli, he’ll pay respects to the French bistro and Parisian markets while embracing classic tableside preparations like duck press and caviar service.