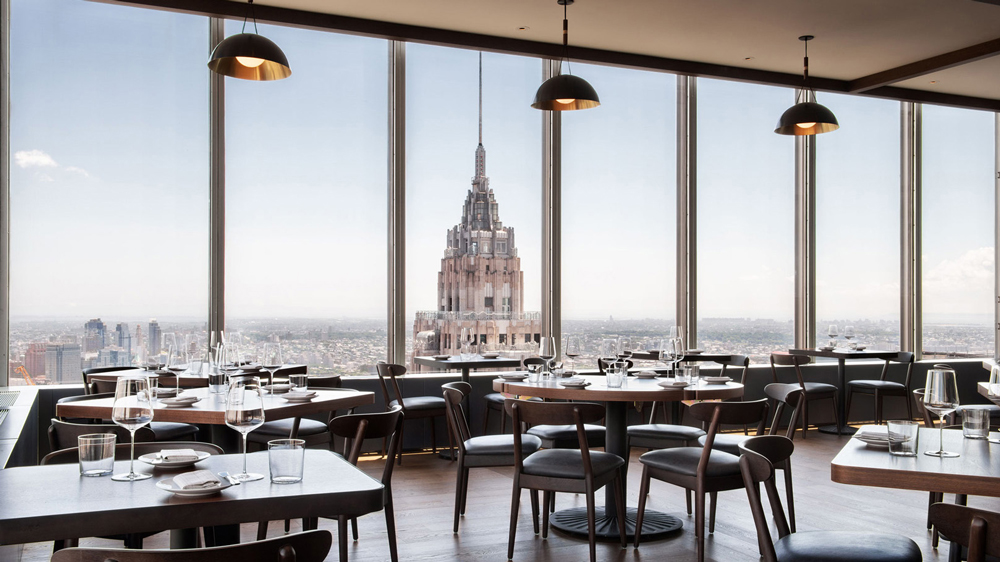 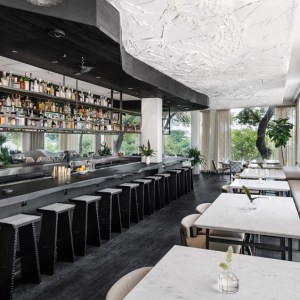 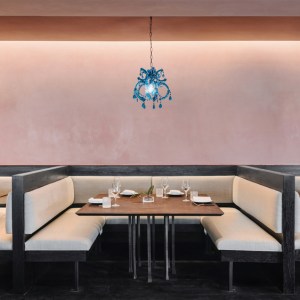 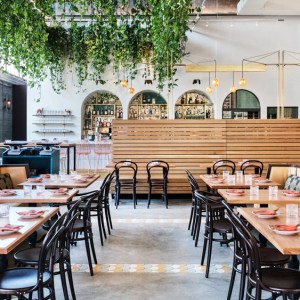 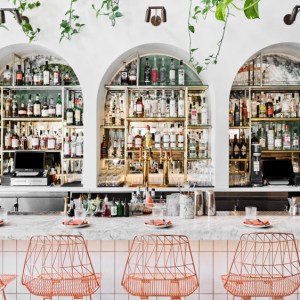 A great restaurant is so much more than just the food. The cuisine may be what gets you in the door, but the service and the design have to work in concert with the epicurean vision to create the sense of place that keeps you coming back. While we regularly cover the food side of the restaurant world, we wanted to step back and celebrate the places that also delivered exceptional design in 2018. We looked across the country to name the 13 most beautiful new restaurants of the year.

Inside the Line hotel.  Courtesy of Arlo Grey

Top Chef winner Kristen Kish finally opened her first solo restaurant, departing from Boston where she first made her name and taking up residency inside the Line hotel in the Lone Star State. Situated near Town Lake, the restaurant’s design takes advantage of the views. Floor-to-ceiling windows look out onto nature, while inside the black bar starkly contrasts with the crisp, white marble tables.

The second restaurant from the husband-wife duo Ori Menashe and Genevieve Gergis is a stunner. Their first place, Bestia, turned LA’s Arts District into a dining destination. For their encore, they created Bavel, a restaurant inspired by Menashe’s Israeli heritage and their travels through the Middle East. In addition to the food, their trips also influenced the design of the restaurant. Gergis, along with the firm Studio UNLTD set the space apart from Bestia. “Bestia is old, Italian, dark,” Gergis says. “For this one, I was inspired at how open and airy the restaurants are when I traveled. They have really nice ceilings with plants growing, like here. The climate of L.A. mimics Marrkesh or Tel Aviv or Casablanca, so I looked there for inspiration.” But she also included touches that are very personal, which is a fair amount of 1970s-inspired furniture and orange bathroom tile. “The design team said, ‘That’s a lot of orange tile, you know that, right? You’re crazy,’ and I was like ‘yep.’”

We welcomed back Jonathan Benno to the fine dining fold this year with the opening of his eponymous restaurant. At the Evelyn Hotel in Manhattan’s Nomad neighborhood, the former Per Se chef de cuisine unveiled a trio of eateries. He began with Leonelli Focacceria e Pasticceria and the Roman-inspired trattoria Leonilli Taberna. The last of the three to open was Benno. Tucked in the back of the hotel’s first floor is a grand art deco-inspired space created by Parts and Labor Design. The lush curvilinear booths are upholstered in velvet and the fixtures are trimmed out in brass to create a room that feels elevated enough to complement the food, but stays away from being stuffy.

Chef Chris Bleidorn has worked in some amazing kitchens from Alinea to Benu to Saison to Atelier Crenn. The New England native with a lot of California experience looked to the Pacific Northwest when he opened Birdsong in May. The food is described as “heritage cuisine” tied to the ingredients of Oregon, Washington, and British Columbia. Architecture firm Saint drew upon that back-to-nature ethos to design a restaurant with exposed wood beams, wood floors, and wood table tops, paired with a pale green banquette wrapping the space that’s set against rustic exposed brick.

Where one of the Bay Area’s hottest restaurants resides today there used to be an autobody shop, and long before that a horse stable. Jon de la Cruz of DLC ID manages to blend those two influences in the century-old building, creating a restaurant that’s both rustic and industrial—like Johnny Cash covering Nine Inch Nails. At Chef Fico red and black accents pop against the backdrop of white tile and poured concrete floors, while the exposed wood beams on the lofted ceiling recall the stable it once was.

The years-long restoration of an early 20th century blacksmith shop in Nashville’s Germantown neighborhood really paid off for Geist’s owner Doug Martin. While beautifully preserving the space’s original brick walls, Martin and designer Anne Marie Garcia outfitted the interiors with furniture made by local artisans that expertly fit the feel of the room. And the crystal chandelier hanging over the bar adds a dramatic contrast to the rustic, exposed wood beams above.

Serene in its simplicity.  Courtesy of Indianola

No need for sorbet, this restaurant’s design is practically a palate cleanser in and of itself. The light, airy minimalism of Indianola pleases with its simplicity. Co-owners Julia and Morgan Weber designed the space with an assist from furniture designer Garza Marfa. They achieved their soothing look by combining warm-toned banquettes with exposed beams on the ceiling and white mosaic floor tile. The restaurant is part of a larger project of the Weber’s Agricole Hospitality group, where Indianiola adjoins a pizza place (Vinny’s) and a 5,000-square-foot cocktail bar (Miss Carousel).

Only in the Big Easy.  Neil Alexander

You’ve had the palate cleanser that is Indianola, now it’s time to indulge. The designers behind Jack Rose really went for it. And if this restaurant existed anywhere other than New Orleans, we’re not sure how much we’d actually like it. The space inside the Pontchartrain Hotel is split into four distinct rooms, each with their own design flourishes. Walk through and you’ll find painted wood floors, floral tablecloths, teal drapery, a variety of wallpaper, and a portrait of Lil Wayne painted by Ashley Longshore.

Danny Meyer’s restaurant in the sky has some of the most unrivaled views of any dining room in America. From the 60th floor perch in the Financial District the Gotham skyline unfolds around you. Architecture firm Woods Bagot was smart not to mess with the restaurant’s strongest asset. So they created an uncluttered design with clean, elegant midcentury modern lines that draw upon the era in which the building, 28 Liberty, was born. Manhatta with its 40-foot-long granite bar and walnut tables is far from formal, and gives the feeling of a refined neighborhood restaurant that just happens to have a view of every neighborhood in the city.

For people who love Art Deco design, this was a great year for them in the restaurant world. As the omnipresent midcentury design begins to fade, across the country deco is taking its place. One of the best is Jessica Largey’s debut restaurant Simone in Downtown LA’s thriving Arts District. Housed inside a 1920s building, designer Deirdre Doherty created a space evocative of the era with antique mirrors, leaded glass windows, velvet banquettes, brass-edged walnut tables, and geometric light fixtures.

Step into the little 10-seat restaurant within a restaurant and you’ll feel like you’re at a completely different property altogether. Whereas Jose Andres’ Bazaar is a sensory overload filled with black tables and red accent lights, Somni is a calming combination of oak and marble. Capella Garcia Architecture and eb design created a space that integrates the kitchen and the diners, who sit at a counter overlooking the staff preparing their food. They also evoke calm by challenging themselves to design a room with no counters, creating a back wall that seamlessly curves into the floor and ceiling. The final touch are the trio of color bull heads meant symbolize chef Aitor Zabala and Andres’ time at Ferran Adria’s el Bulli.

In my grad school days, my friends and I would head to a bar called Schubas to have some drinks in the front and then crowd into a tiny music venue in the back for some indie rock. It was a great Chicago place, but a pretty humble looking tavern. When the group behind that bar knocked down the building next door, my old Schubas experience didn’t prepare me for the stunning two-story restaurant they’d build. Gensler Chicago designed the restaurant, mirroring some of Schubas style with the brick exterior. Inside is a mix of crisp, geometric lines, mixing wood flooring, copper accents, and beautiful marble all set against a pleasing shade of green on the walls.

Parts and Labor makes another appearance on the list with the design of Casey Lane’s seafood-driven Italian trattoria. There’s a lush, Hollywood vibe to the place, with a tinge of the 1970s thrown into the mix as well. The space expertly combines Mediterranean blue tile, rich wood, brass accents, and some oversized mustard yellow sofas serving as seating at the center of the restaurant.