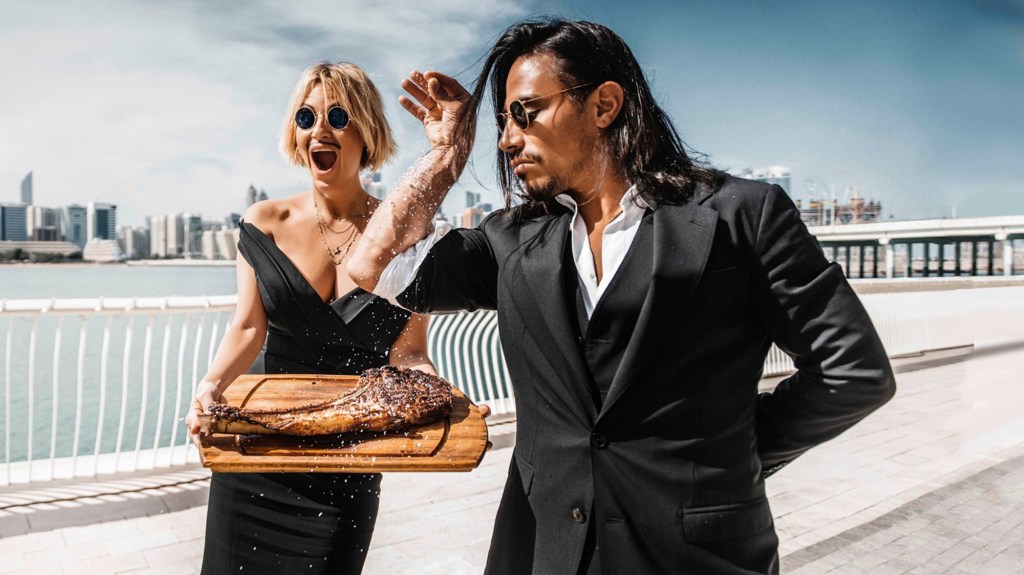 From Salt Bae to sandwiches that will set you back almost two Franklins to the restaurant world doing some soul searching in the wake of the #MeToo and #TimesUp movement, it was a memorable year in the food world. As well look back at Robb Report‘s most-clicked dining stories of 2018—even beyond the top 10—we saw what topics resonated most with our readers this year. When notable restaurants closed, our readers couldn’t help but want to figure out why; if steak was involved, they found it hard to stay away; and as always, because this is the internet, you love a big old list to debate. Here are the 10 most popular dining stories published by Robb Report this year.

10. Salt Bae’s Latest Video Finally Makes the Internet Turn on Him
Remember Salt Bae? That internet meme incarnate briefly burned white hot when he opened his first New York restaurant in January. But the internet is fickle, my friends, and once he started making videos where he ruined beef tenderloin with Kraft singles, people became less interested in letting this guy spill sodium all over their laps.

9. The $180 Steak Sandwich Arrives in America
Americans favorite import from Japan was a tiny steak sandwich with a big price tag. The wagyu katsu sando at Don Wagyu in New York’s Financial District featured an ultra-exclusive cut of A5 Ozaki beef that’s been aged for 36 months. The wagyu katsu trend has recently washed up on American shores, but the sandwich grew in popularity the last few years in Japan. Chefs started taking a slab of beautifully marbled beef, breading it in panko, flash frying it so the inside is warmed through but still rare, and then served between two slices of fluffy Japanese milk bread.

8. Gordon Ramsay Cooks Pad Thai for a Thai Chef and Gets a Taste of His Own Medicine
The internet has a long memory. Gordon Ramsay became intimately aware of this when a video from his old TV show—one that’s been off the air for eight years—resurfaced to the delight of his critics. The chef who became famous in America by insulting people on TV had the tables turned on him. He made pad thai for a Thai chef and Ramsay did not impress. “This is not pad thai at all!” the chef says to the dejected Ramsay. Maybe the temperamental Brit needs to stick to cooking lamb chops and beef Wellington.

7. Watch How Two of the World’s Great Chefs Grill Steak
When Carlo Mirarchi and David Kinch get together with some enormous steaks and a couple kettle grills for “A Meat Off” the results are fun and informative.

6. Watching Japan’s King of Tuna Cut Fish is Mesmerizing
At Tokyo’s famed Tsukiji fish market, Yukitaka Yamaguchi, who owns the Yamayuki Group, has become known as the market’s king of tuna. After watching him work and explain his craft, you’ll understand why.

5. The 10 Best New Restaurants in America
We traversed the country to countdown the top new places to eat.

3. This Disgraced Restaurateur’s Empire Continues to Crumble
One of the country’s most famed restaurateurs, Ken Friedman, faced fallout all year following the December 2017 New York Times investigation that revealed sexual misconduct allegations against him. He lost talent, shuttered restaurants, and broke up with his longtime business partner April Bloomfield.

2. The 21 Best Steakhouses in America
Robb Report readers can’t get enough steak. So we decided to let them know where the best ones in America are located.

1. The 30 Most Influential Restaurants of the Last 30 Years
In honor of the 30th Anniversary of Robb Report‘s Best of the Best issue, we wanted to look back at those years and understand which restaurants during that time were the most influential. We spoke with some of the world’s leading chefs and restaurateurs from Massimo Bottura to Mei Lin to Corey Lee to Ashley Christensen to ask them what restaurants had most changed the game in the last three decades.

Noma was on a lot of people’s lists for most influential restaurant.  Photo: Courtesy: Laura L.P./HDG Photography