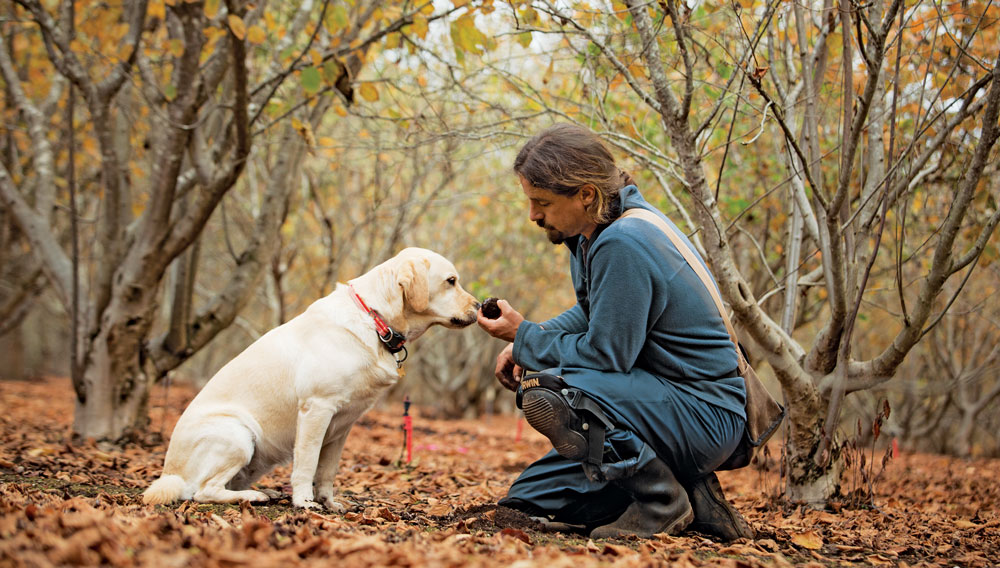 It is early July in Western Australia, and the black-truffle harvest is swinging into high gear in the remote village of Manjimup. As I walk the Truffle & Wine Co.’s 52-acre grove of hazelnut and oak trees with the truffle hunter Adrian Mielke, there is a sense of urgency. Winter rains are flooding the normally dry soil, imperiling a few million dollars’ worth of “black diamonds” with the chance of rot.

Mielke’s affable yellow Labrador retriever Lola snuffles along the ground until she scents truffles intertwined with the roots of a host tree. She scratches at the soil to mark the spot and waits as Mielke gets down on one knee and roots his fingers into the friable soil to reveal a cluster of three black lumps. He lifts and gently turns over the truffles, lightly squeezing each one to ensure that it has not gone soft and looking for insect damage or other surface faults. He leans over and sniffs the hole for mildew. Satisfied that the truffles are ready to be harvested and are in prime condition, he covers them over and drops a fluorescent pink streamer to mark the spot for the harvesters.

Lola gets the first of many treats before we continue along the 25 miles of nut-tree rows in the Hazel Hill truffle farm, or truffière. Mielke and Lola usually cover three to four miles per day and discover hundreds of ripe truffles. Each little dig turns up clusters of two to seven truffles; most are the size of hen’s eggs, but others are as large as a goose’s. These treasures weigh an impressive 1 to 4 ounces each.

Every so often, Mielke pauses to pick up a truffle that has nudged its way to the surface. He grimaces as he hands me a spongy specimen that is beginning to disintegrate—a black diamond turning into a lump of compost. “We need to harvest faster before the rains soften up the ground,” he says.

Despite challenges from rain, rot, and even insects, the Truffle & Wine Co. claims to be the world’s largest producer of Tuber melanosporum (the scientific name for the black Périgord truffle). While no global industry figures supporting this assertion exist, no one disputes the claim, and regional figures show that the Hazel Hill truffière—which is still not fully mature—already produces more truffles than Australia’s other 160 growers combined. During last year’s harvest, a record 8,400 pounds of truffles were pulled from the soil at Hazel Hill. Even more are expected this year.

Wild-foraged truffles still dominate the European trade, but the modest success of scientific truffle farming in France, Italy, and Spain has encouraged trial farms in such New World locales as Napa Valley, Oregon, and Appalachia. Although Australia (which has no native culinary truffles or host trees) seems an unlikely place to try truffles, farmers in northern Tasmania planted the country’s first truffière in 1991. Even before they harvested their first specimen in 1999, truffle farming was being touted as the next great wave of Aussie trophy agriculture—as if the Périgord could put Shiraz in the shade.

The entrepreneurs Alf Salter and Graham Durbin—respectively the director and the chairman and managing director of the Truffle & Wine Co.—had a hunch that Western Australia might be a better match than Tasmania to the truffle’s Southern European homeland. Six years after planting the Hazel Hill truffière in 1997, they harvested their first truffle—a nearly 6-ounce lump slightly smaller than a baseball. By 2009 the project was producing 1,300 pounds of black truffles, and production has grown dramatically since then. Until another Southern Hemisphere truffle farm can match the magic in Manjimup, the company has the Northern Hemisphere summer truffle market largely to itself.

Method, however, stands behind the magic. The company meticulously selected pure Périgord spores to add to the soil around its seedling trees to guarantee that no competing fungi would grow. (The 2010 publication of the DNA sequence of Tuber melanosporum made that task easier.) The local bandicoots and black cockatoos are not interested in truffles, and the environment in Western Australia harbors none of the parasites, like truffle beetles and truffle flies, that cause major problems in European truffières. Moreover, the Truffle & Wine Co. has added sufficient lime to the soil to create an alkaline island in an otherwise acidic sea. The recent discovery that the fungus reproduces by an exchange of DNA between individual fungi (the mushroom equivalent of sex) gave Harry Eslick, the Truffle & Wine Co.’s staff mycologist, the inspiration to experiment with proprietary cultivation techniques to further boost production.

The bounty of the Hazel Hill truffière opens a second truffle season to diners around the world. European black truffles are harvested from November through March. Australian truffles are on the market from late May through August, and they reach North American chefs faster than European truffles. Black truffles develop their peak aroma around five days out of the ground and hold for roughly 11 days. Upon harvest, the Truffle & Wine Co.’s tubers are quickly cleaned, graded, packaged, and shipped, clearing U.S. customs within three days of harvesting. European truffle foragers may only bring their finds to market once a week, so by the time a truffle reaches North America, its flavor is ebbing.

Truffle seasons in the two hemispheres do not overlap, so head-to-head comparisons are not possible. But many high-profile chefs concur that the flavors are the same. Traditional uses for black truffles—with braised meats, rich winter pastas, and fatty egg dishes—play up the dark, sensuous musk of the fungus. Summer dishes can explore another dimension often obscured in heavier winter dishes. When paired with green asparagus, corn, sweet peas, or summer squashes, black truffles bring a spice cabinet of flavors into play: black pepper, nutmeg, coriander, even the pungency of asafetida, an evocative scent that forms the bass note in many South Asian curries.

Eli Kaimeh, chef de cuisine at Thomas Keller’s Per Se in New York, exults in the newfound possibilities. “We look forward to a really good thing twice a year now,” he says. His favorite produce pairing from last August was a succotash of corn, zucchini, and black truffles accented with roasted peppers. The truffles provided resinous overtones and a nutlike quality to the mélange of sweet, soft vegetables. Curtis Duffy, chef at Grace in Chicago, uses them in dishes such as a savory crème caramel topped with truffles, chives, and a sherry sauce, and a squab preparation with truffles, green strawberries, and sorrel. “These Australian truffles are the equal to any in the world,” Duffy says.

Most U.S. chefs were introduced to Australian truffles by Frank Brunacci, a chef who left the kitchen in 2011 to become a truffle importer. Now he is the vice president of sales for the U.S. subsidiary of the Truffle & Wine Co. and supplies about 180 U.S. restaurants during the year. In May, he also starts selling them direct through the Truffle & Wine Co.’s website. Wholesale prices vary by grade, ranging from $300 per pound for parings to $650 per pound and up for whole truffles—about the same range as European truffles.

A customer’s first box of Aussie truffles is nearly always a hard sell. Based on his experience with insipid lesser species of summer truffles from Oregon and China, Craig Strong of Studio at Montage Laguna Beach was initially skeptical. In 2009, Brunacci suggested that he try some samples with corn. “The combination just explodes in your mouth,” Strong says. Now he features a black-truffle dish every summer. “Last year, I made corn agnolotti with a corn custard as a base, corn in the middle of the pasta with a little bit of mascarpone, a corn foam, and fresh truffles,” he says. “Most European-trained chefs never thought about corn and truffles in the summertime. Now we do.”

Chefs used to applying truffles to foie gras or filet mignon discover a sudden, giddy sense of liberation when they try black truffles with the bright flavors of summer vegetables. Ken Frank of La Toque in Napa, Calif., has served all-black-truffle menus in January and February for over 30 years. In 2014, he finally tried the Manjimup truffles and realized what he had been missing. He served a black-truffle menu in July and August that included his adaptation of a Catalan classic: a plate of roasted, hand-crushed Yukon Gold potatoes over steamed Romano beans drizzled with olive oil and sprinkled with sea salt and black truffles. “The earthiness of the potato, the brightness of the olive oil, the slightly sweet but earthy tone of the bean, and the truffle combine in a way that’s magical,” he says.

The next morning in Manjimup, where the truffle production has a magical air of its own, the weather is unusually dank after an all-night rain. At breakfast, I shave a small black truffle over my scrambled eggs and toss them with a pat of butter. The eggs make the truffles taste like toasted almonds with a hint of pine, and the truffles make the eggs sweet. This indulgence is possible in a community where bits and pieces of black truffle are available for a song compared to the perfect specimens shipped around the globe.

At the truffière, the truffle hunters are out with their dogs, retrieving precious fungi from the suddenly sodden soil. The truffles in plastic crates in the grading room do not look the worse for wear, though some are a little muddy. I ask if the weather has hurt them, and a worker lifts a box to my face so I can inhale the aromas. The funky scents of earth and spice make my eyes water.