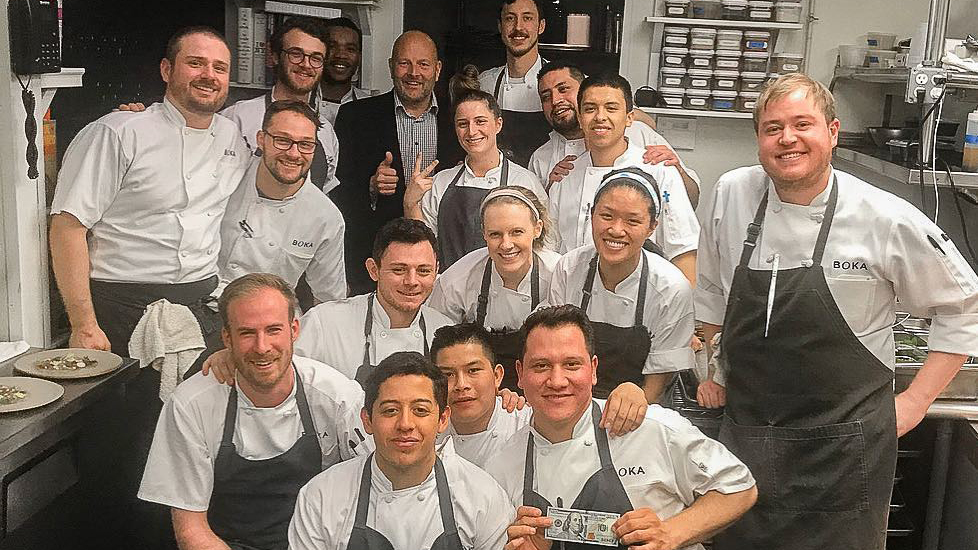 This morning, chef Lee Wolen of Michelin-starred Boka in Chicago posted a slightly different picture on his feed. It was a photo of his kitchen staff surrounding one customer while holding up $100 bills, with this caption: “This man ate @bokachicago last night, walked into the kitchen after to thank everyone for an amazing time and all of the hard work it takes to work in a kitchen, shook 17 hands with a 100 dollar bill for each of them. Amazing human right there. Thank you sir!”

A representative from the restaurant confirmed to Robb Report that a customer identifying himself as “Mike from Seattle” had a $769 bill and tipped $308 on top of that for the service staff. Then, he went into the kitchen to present each person with a crisp Benjamin Franklin while telling them it was the best service and food he’d ever had.

Boka is the flagship restaurant of the restaurant group by the same name, founded by Kevin Boehm and Rob Katz. The group operates some of the city’s best restaurants, including Stephanie Izard’s Girl & the Goat, Bellemore, Somerset (Wolen’s other restaurant), and more. Mike is in good company praising the restaurant. This year, Boka is nominated for James Beard awards for Best Pastry Chef, Outstanding Service, Best Chef: Great Lakes region, and Outstanding Restaurateur.

“It was definitely a rare experience that I think everybody was happy to be a part of,” sous chef Brianna Meyers told the Chicago Tribune. “I’ve never seen anything like that before.”

Meyers may not have seen anything like it, but it calls to mind the famously generous tipper known as Tips for Jesus, who anonymously left tips of up to $10,000 for years before his identity was revealed as former PayPal exec Jack Shelby (though it’s believed Tips for Jesus is actually a collection of diners and not just Shelby). The difference is that Mike from Seattle didn’t try to fully hide his identity; the staff all got to meet Mike and shake his hand. However, that does leave a mystery as to who he really is—and why he’s just wandering around with a pocketful of crisp $100 bills. If you know Mike’s full identity, feel free to leave it in a comment section below.

UPDATE
It appears that “Mike from Seattle” is Michael Cockrill, the former Chief Information Officer for the state of Washington, and now the Chief Technology Officer at the Altius Institute for Biomedical Science. Mystery solved!