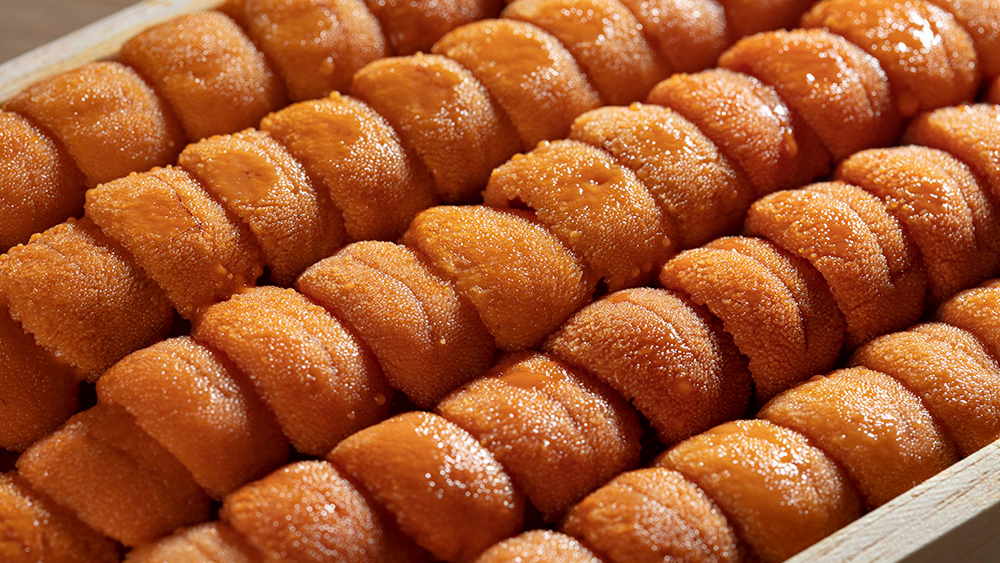 While American diners are accustomed to comparative oyster, cheese, wine and even ham tastings, eating three premium lobes of uni, each sourced from a different bay, is a rarer indulgence. “They have a similar aroma and flavor, but eaten side by side, it opens your eyes and palate to nuances,” says Kunihide Nakajima, sushi chef and owner of Nakaji in New York’s Chinatown.

Nakaji is tucked into an alley off the Bowery and just west of the Manhattan Bridge, and its intimate, $225 omakase is an exercise in traditional Edomae technique—all passed down to Nakajima, a third-generation sushi master, from his grandfather and father.

Nakajima, who worked in the States for 25 years before opening Nakaji, noticed that more American customers were starting to enjoy and ask for uni, and he decided to create a “real Japanese uni experience.” At Nakaji, that uni tasting is available as a $70 omakase supplement, or as a stand-alone, $80 moment of bliss at Nakaji’s bar, where guests can sip Japanese whiskey highballs and eat a more casual meal of chirashi and soy-caramelized oysters.

The crux of Nakaji’s uni tasting is access. Nakajima’s family still runs restaurants in Tokyo, and through those connections, he’s able to purchase uni from the renowned Toyosu Market. He buys about 30 trays of uni each week, split between three varieties.

To take a step back, uni are the four to five gonads, or reproductive organs, found inside male and female sea urchins. As the spiny critters gobble up kelp (their preferred diet), these orange-hued glands grow fat and fabulous, taking on the flavor of the seaweed and the surrounding ocean’s nutrients.

Of course, sea urchins grow in all corners of the ocean, in warm and cold waters (at the moment, they’re wreaking havoc on the California coastline), and the 30 or so edible species come in different shapes, sizes, colors and grades. This writer has eaten uni plucked from the shores of Martinique and cooked in a Créole stew; chefs have served me uni in zippy ceviches, crowning baked oysters and swirled into whiskey sauces and bowls of pasta.

“There’s no proper way to eat uni,” says Nakajima, who has a soft spot for grilled uni and uni carbonara. He might also slip a premium lobe atop a wiggling, just-warm bowl of chawanmushi.

But the highest grade uni, the stuff of omakases, is typically one of two varieties: bafun or murasaki harvested from the cold waters of Northern Japan (and Hokkaido, in particular), as well as nearby Russian islands and the territory of Primorsky Krai. According to Nakajima, this uni should be eaten raw and in its purest form.

However, the best-of-the-best ezo-bafun uni, as the species is known in Hokkaido, is harvested from deep, frigid waters and its sweet, creamy lobes are worthy of unadorned sushi and sashimi presentations.

Delicate, mustard-hued murasaki uni comes from a purple sea urchin species, whose lobes are larger than bafun with a subtler, brinier flavor. Though it grows all over Japan and off the coast of Hokkaido (in which case it gets the designation of kita-murasaki), much of murasaki is harvested just north of Hokkaido from islands that have flip-flopped from Japanese to Chinese to Russian control.

Uni’s potential lies in the balance of nature (the species) and nurture (habitat), with the seasons affecting the flavor subtly, according to Nakajima. Peak season for murasaki falls in the warm late summer of July and August; kita-murasaki runs from September to October. Bafun in most of Japan hits its peak from October to November, and ezo-bafun falls in the coldest months of December, January and February.

Dining at Nakaji is an education in these pedigreed uni, as well as Nakajima’s hyper-seasonal, obsessive approach to sourcing seafood.

Every package of uni that passes through the Toyoso Market gets graded on its shape, appearance, size and taste. The closest to perfect, the cream of the crop bafun and murasaki specimens (rated with no. 1, 2, or 3 grades) often go to auction, which Najakimi bids on some 6,700 miles away in New York. Some weeks he’s able to secure Toyoso’s no. 1 auctioned uni for far above the standard price. The reasoning goes: If it’s the best in the market, it’s the best in Japan, and the best on the globe.