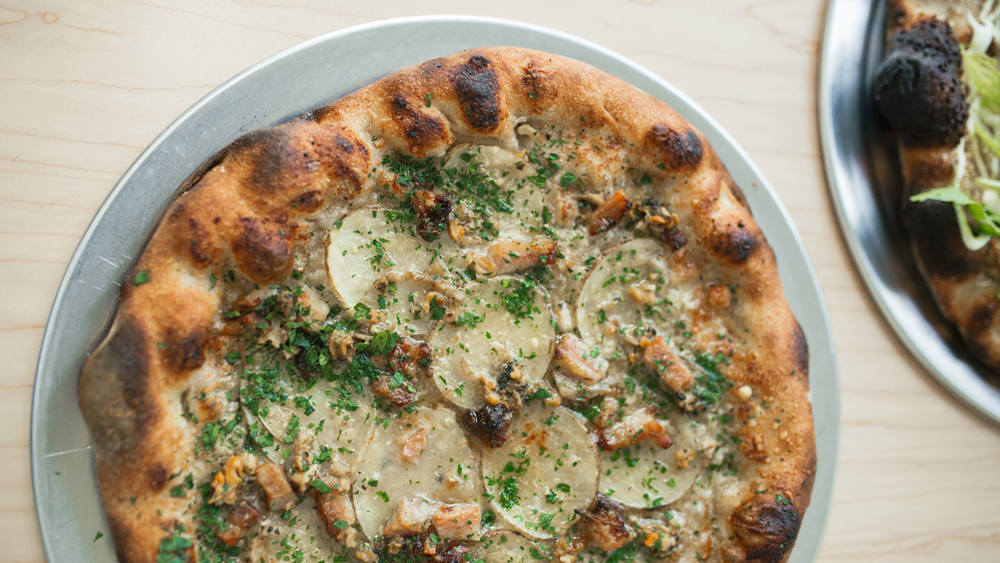 In Connecticut, where old-school pizza dominates and New Haven icons Frank Pepe Pizzeria Napoletana and Sally’s Apizza continue to sling their coal-fired masterpieces, Nana’s Bakery & Pizza is pulling off what feels like a magic trick. Nana’s, which opened in Mystic last October, is making terrific Connecticut pizza that tastes both familiar and brand-new.

“I know Connecticut’s famous for its pizza, down in New Haven for sure,” says Nana’s chef-owner James Wayman. “We’re doing something that’s very different from that.”

The clam pizza (known as the New England) at Nana’s is a delicious and transporting riff on clear Rhode Island clam chowder. The cream-free pie, cooked at 650 degrees in a gas oven, evokes roadside seafood shacks with its combination of local clams, bacon, potatoes and garlic butter. The thin sourdough crust is nicely chewy and a little crispy, with a mellow tang.

In many ways, Nana’s resembles great all-day bakeries and restaurants like California’s Tartine Manufactory and Gjusta more than it resembles Connecticut pizza places. It starts with the flour. Nana’s, a waterfront destination in a former seaport town that’s home to the movie-famous Mystic Pizza, uses organic 00 flour from Utah’s highly regarded Central Milling. Nana’s also gets local grains, from Connecticut’s Still River Farm and Maine Grains, and mills them in-house. Pizzas are naturally leavened, with just a little yeast that stabilizes the dough and “gives a little bit of the classic yeasty flavor,” Wayman says.

All the pizza dough is bulk fermented for 24 hours. Then the sourdough is shaped and continues to ferment.

“I’m a big fermenter,” Wayman says. “I’ve been doing it for 20 years. So anything that’s alive and living and wild, I love the funky flavors you get from that. It just adds this other depth and dimension. Also, long slow fermentation makes it easier to digest and tolerate.”

At Nana’s, “it’s kind of ambient temperature, so things fluctuate,” Wayman adds. “We like it best around 48 [hours]. It depends on how hot it is, how humid.”

This sums up Wayman’s mindset. He’s always ready to make adjustments. Similarly, he’s thinking about what kind of local whole wheat he might use after Nana’s goes through its supply of Still River Redeemer wheat. Maybe it’ll be something else from Still River or Maine Grains.

“It enables me to have a very simple pizza sauce,” Wayman says. “It’s just tomatoes, shio koji, water and salt. Koji makes tomatoes more tomatoey. We have been putting a little bit of tomato leaves in our shio koji this summer to kind of push that a little more.”

There’s also koji in the habanero ranch you can order as a dip for crust. Another dip, born out of Nana’s chef Corey Lein’s fondness for za’atar, is a za’atar crunch that gives the idea of chili crunch an herbaceous Middle Eastern twist.

Wayman is quick to mention Lein, Nana’s baker David Vacca and other key players in his food community, including koji expert Rich Shih (the co-author of Koji Alchemy) and Moromi founder Bob Florence. Florence initially reached out when Wayman was running the kitchen at Mystic’s Oyster Club, a restaurant that opened in 2011 and has become a cornerstone of the town’s emerging dining scene. Florence was making his own soy sauce and miso, and his relationship with Wayman began with him dropping some off at Oyster Club. Florence later went to Japan and found mentorship at Chiba Shoyu, a soy sauce powerhouse that dates back to 1854.

Wayman loves bringing global influences to Mystic, where he’s cooked since 1999. He believes there’s plenty of room for more innovation and many new restaurants. At the same time, he wants to honor local ingredients and local history, of course.

For example, he’s putting Connecticut cornmeal on his pizza peel to add a little crunch and flavor while preventing the dough from sticking. The heirloom Flint corn, originally cultivated by Native Americans, is from Davis Farm, a Pawcatuck institution that dates back to 1654.

Both Nana’s and Grass & Bone happened because Wayman recognized a need for Mystic dining that’s more casual but doesn’t sacrifice the quality of the food. So he set out to open places that people would want to visit every day.

“I just want to see the scene and the area grow,” Wayman says. “When I came here, you’d see all these restaurants in one of the most amazing fishing areas in our country, if not the world, buying frozen cod from Alaska. It’s wonderful to see the evolution of farming and artisans and an amazing food community that’s developed in the last 10 years.”