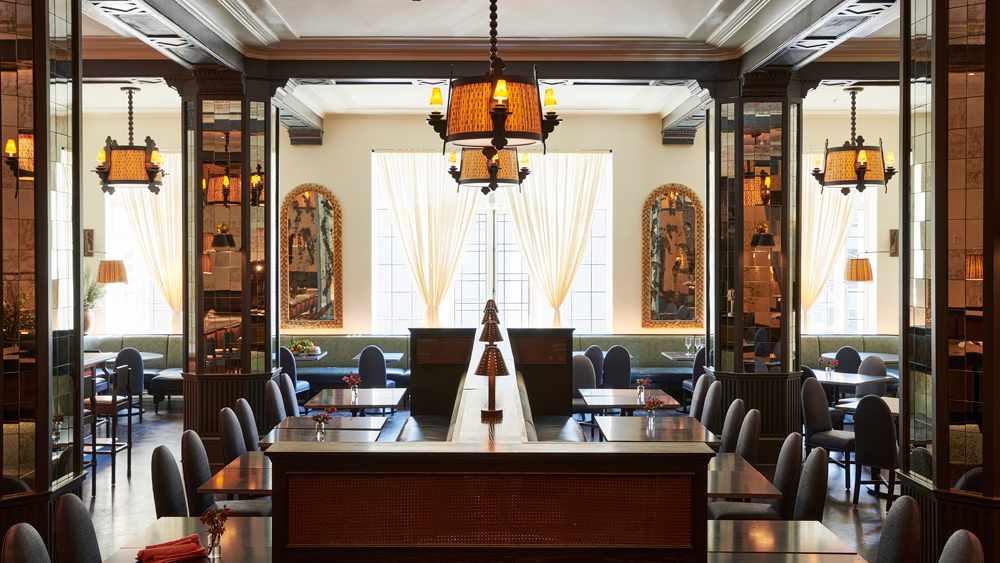 When your restaurant has been 130 years in the making, what’s a few months’ delay? For restaurateur and chef Nancy Silverton—known for her LA spots Osteria Mozza, chi SPACCA and Pizzeria Mozza—her newest project, her first in nearly a decade, has been worth the spurts and starts it’s taken to get off the ground.

“[I have] all the emotions that come with opening up a new restaurant, but in this case, they’re even more passionate because I feel like I’ve waited so long,” Silverton told Robb Report. “This was ready to open and then the world wasn’t ready to open yet. I feel like I was extra patient and now I’m extra excited.”

Silverton’s The Barish, a reimagined steakhouse inspired by her family’s 19th-century roots in Saskatchewan, Canada, first attempted an opening in the Hollywood Roosevelt Hotel in October 2020. Indoor dining was not permitted in LA at the time, but they were able to move service from the restaurant’s glamorous, renovated dining room to the historic hotel’s outdoor patio, offering a limited menu.

Silverton jumped at the chance to introduce the steakhouse concept—a departure from the Italian fine dining that earned her a Michelin star, an episode of Chef’s Table and a James Beard award—to the public even though she was not satisfied with the setup.

The experiment barely lasted a month before LA County public health officials halted outdoor dining once again. Instead of closing and reopening and possibly closing again, never knowing when regulations would change or whether diners would be comfortable dining out at all, Silverton chose to shutter The Barish until a more permanent solution emerged.

In March 2021, limited indoor dining resumed in the city and conditions seemed to steady as vaccines became widely available and the number of Covid-19 cases plunged. So Silverton opened The Barish in all its intended glory—for real this time—last week.

“It took a little bit longer than we expected, but we felt that we needed to just focus on opening the restaurant that we had planned to,” she said. “The people who came [in 2020], it made them even more excited to see what it would be like when we were able to get them the experience that we intended.”

At The Barish, that experience is meant to feel classic, timeless, Silverton said. The reimagined steakhouse is named after her paternal grandmother’s family, Jewish immigrants from Eastern Europe who raised Angus cattle and Hampshire sheep on a homestead in Canada. But she wanted the motif to complement the hotel’s history in LA and Spanish Colonial Revival design.

“It couldn’t be some sort of splashy restaurant that felt like it only belongs in 2021,” she said. “I knew I needed to do something that not only feels like it can live into the future but could have been here in the past. And by bringing in the history of my family, I think it bridged that gap. The whole picture works.”

The Barish is located in the hotel’s landmarked lobby and the focal point of the 110-seat dining room is a central, wood-fired hearth, which Silverton said warmed up the space, giving it life. Many modern details, such as the charger plates, were sourced from Europe and are reminiscent of the Italian countryside where Silverton spends her summers.

Nearly everything on the menu is cooked in the hearth. That includes popovers with 24-month-aged prosciutto di Parma; grilled sweetbreads with salsa verde and lemon; lamb ribs with scallions and ginger; grilled abalone mushrooms with porcini butter; pork chops smothered with chrysanthemum leaves and fennel pollen; and large-format meats like the 40-ounce porterhouse that’s been dry-aged for 40 days.

“I’m trying to bring in some of the familiar flavors of a steakhouse and then I’m marrying that with some familiar Italian dishes and flavors,” she said. Instead of serving creamed spinach, for example, she’s doing creamed mustard greens with Pecorino and mustard seeds. She’s topping her iceberg wedge with Trufflebert hazelnuts and cipollini. And instead of offering traditional steak sauce, she’s serving the simply grilled meats alongside cacio e pepe sauce.

Additionally, The Barish offers pasta, all of which are baked al forno style as opposed to the pan-sauced, à la minute versions found in most restaurants.

“Hopefully, people are going to notice that and say, ‘Oh wow, that’s different. I like that,’” she said. She thinks other restaurants will follow her lead “once they see how delicious they can be.”

She also didn’t want to repeat desserts available at her other restaurants. She nixed the idea of a traditional pastry department in lieu of focusing on gelati and sorbeti with “sophisticated finishes” like olive oil, Maldon sea salt, honey or 25-year-aged balsamic vinegar. There’s also a bread pudding and a giant cookie cooked in the hearth and a sundae topped with butterscotch, Marcona almonds and crème fresh. Once the Covid restrictions have lifted, she wants to introduce a gelato cart and prepare the desserts tableside. Interaction, she said, makes dishes taste better.

Once her staff has perfected dinner service, The Barish will open for breakfast and lunch. In the coming months, she will also begin serving light snacks in the hotel’s lobby and start construction on an adjacent wine and cheese bar that she has dubbed Lorenzo’s. She hopes to fill the space with large fondue tables, another post-Covid-restrictions dream the renowned chef is optimistic will come true.