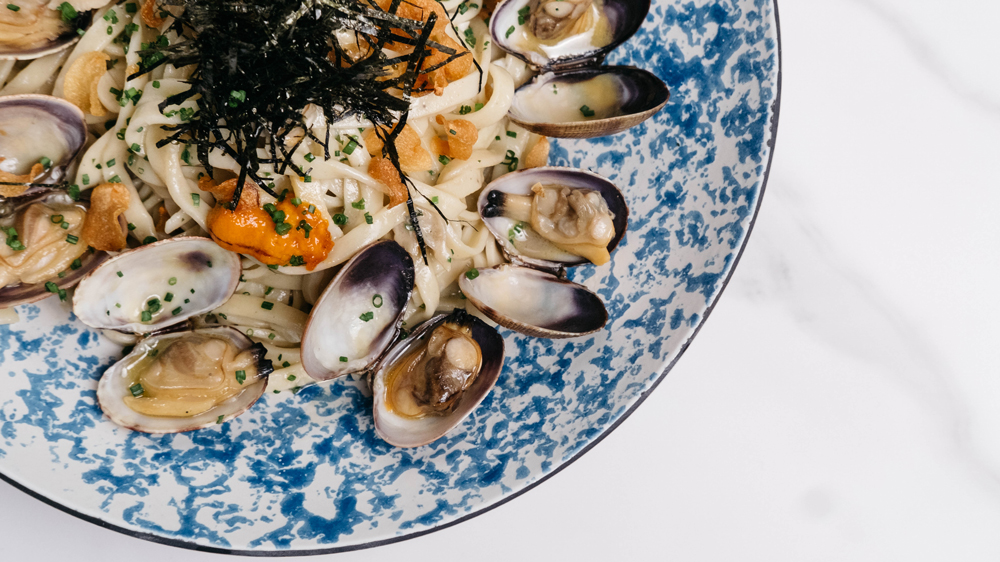 But the chefs, Aaron Bludorn and Jerrod Zifchak, are no longer on the Upper East Side. At Navy Blue, in addition to French classiques à la Dover sole almondine, you can eat a bowl of choc-full-o-shellfish gumbo or a fried grouper sandwich (ideally with French fries dunked in cod roe mayonnaise).

“That’s the whole idea: you could come in and have caviar or a fried fish sandwich,” says Bludorn, who relocated to Houston in 2019 and opened his namesake restaurant, Bludorn, in fall 2020 with his wife Victoria and partner Cherif Mbodji.

Navy Blue, which opened this month, is the trio’s sophomore restaurant. Housed in the former Politan Row food hall, the interior is now a sea of white, gray and, of course, navy blue, set with curvy banquettes, a generous white marble-topped bar and an open kitchen with a stainless steel shimmer. Breaking up the space are arguably the best seats in the house: four cozy booths divided by floor-to-ceiling oak panels that form the spine of the restaurant.

The only obvious nods to the ocean are in the restaurant’s two pieces of art: a stormy mural by artist Emily Eisenhart in the 40-seat private dining room and, hung next to the kitchen, a vintage photo of Bludorn’s father in his Navy uniform (the elder Bludorn’s call name was Blue). It’s all cool and understated save for two pops of chartreuse—one in Eisenhart’s mural and a second that will surely inspire bathroom selfies.

There’s some lightning in Navy Blue.

Before I arrived in Houston for the opening, I heard rumors that Bludorn was paying cooks New York City wages and, in turn, scooping up exceptional workers. “It may be more than New York,” confirmed Bludorn. “If we’re being candid, that’s the model because you have to pay for talent.”

The restaurant hinged on recruiting Zifchak to Houston. (A call was made to Daniel Boulud; the transfer was blessed.) “I was especially excited to open a seafood restaurant, which is my true passion,” says Zifchak, whose credits also include Le Bernardin. “Prior to moving down, I visited Houston a few times and fell in love with the city. The food scene is growing, and it’s amazing to be a part of it.”

Without labor woes, Navy Blue doesn’t suffer from a truncated menu, as is de rigueur these days. In the name of choice, says Bludorn, there are oysters, shrimp, and clams each served three ways, four pastas, nine fish preparations, and seven sides. The menu has breadth. It’s accessible (bread service even includes a nod-to-Red Lobster cheddar biscuits), and Bludorn hopes the restaurant will have wide appeal for casual weeknight dinners and family-style meals. But for all the everyman talk, Bludorn and co. have also built a restaurant for decadent dinners and blow-outs.

Plump Murder Point oysters, sourced from the Alabama coast, are a good start, and you may as well eat them raw, fried and topped with caper-celery aïoli, and (my favorite) baked with oyster liquor bechamel and pork-spicy ‘nduja breadcrumbs. Add clams casino to your order too, and half a dozen shells will arrive filled with what’s essentially a miniature creamy clam casserole, studded with smoky chunks of bacon. Crab cakes, the ultimate safe-date, elicited squeals at my table—loosely formed crab meat, crispy from a proper sear, sat atop a pile of shaved celery root rémoulade and got a flavor punch-up from bottarga.

Navy Blue’s linguine vongole would raise eyebrows in Little Italy, but, as I was informed upon my arrival in town, there are no rules in Houston. Their version is richer and more reliant on butter than olive oil, and instead of a lift from parsley and lemon, the kitchen doubles down on sweet ocean flavor with uni and seaweed.

The kitchen isn’t afraid to give classics a good-natured tweak. I order brandade at any restaurant that serves the dish. It’s hard not to feel comfy and soothed while eating creamy, buttery potatoes and cod, but few chefs manage to inject any verve into the French staple. At Navy blue, the team adds rich, sweet lump crab into the mix, and folds in chipotle romesco for some Texas attitude, which you’ll want to scrape clean with hunks of grilled sourdough.

Dover sole and lobster are offered three ways each: respectively, almondine, Oscar, or Provençal and boiled, Thermidor, or grilled. Figure out how much butter and cream you want in your life, and order accordingly. But don’t pass on a thick slab of swordfish, crusted like a steak and given the au poivre treatment. Yes, there’s a real steak on the menu, a dry-aged strip with chimichurri, but the swordfish—served with a whole head of roasted garlic and surrounded by green peppercorn pan sauce—is the hunk of meat you want.

To drink, you’d do well to dig into all the Burgundies Austad has worked to accumulate for her young program, or order made-for-seafood Assyrtiko (I shared a 2018 Gavalas from Santorini, whose lush texture comes from sitting on the lees for at least five months). Her 160-bottle list has big Cabs aplenty for diners who can’t live without them, but she’s clearly having fun with more esoteric selections. Austad paired Kinoko’s Mantensei Junmai Ginjo sake with the umami-rich swordfish, along with a by-the-glass Fukucho Seaside sparkling sake with dessert.

I can’t remember meeting a pastry chef as excited as Riddle about chocolate coulant (aka ultimate-throwback molten chocolate cake). Hers is topped with a crunchy chocolate tuile and served with a swirl of passion fruit ice cream. But I fell for her Key lime pie, a dessert I rarely order because my memories of the pie are usually more potent than dessert itself (my grandma grew Key limes in her yard … I can’t help but be a hater). But Riddle nixes the pie’s usual condensed milk and makes a bracing, just-bitter Key lime curd that she sets inside macadamia nut crust and tops with a sculptural torched meringue and citrus peels. A quenelle of macadamia nut ice cream softens the electric edges.

Bludorn, a self-professed “pretty normal dude,” really just wants Navy Blue to be good and fun. “Sometimes, at all the hip restaurants in town, you have to think about it too much,” he says. Rest assured that, at Navy Blue, one of Houston’s most stacked teams has done the thinking for you. They’ve planted nostalgia mines throughout the menu and then seriously over deliver. I happily fell for their trap, and you will too.