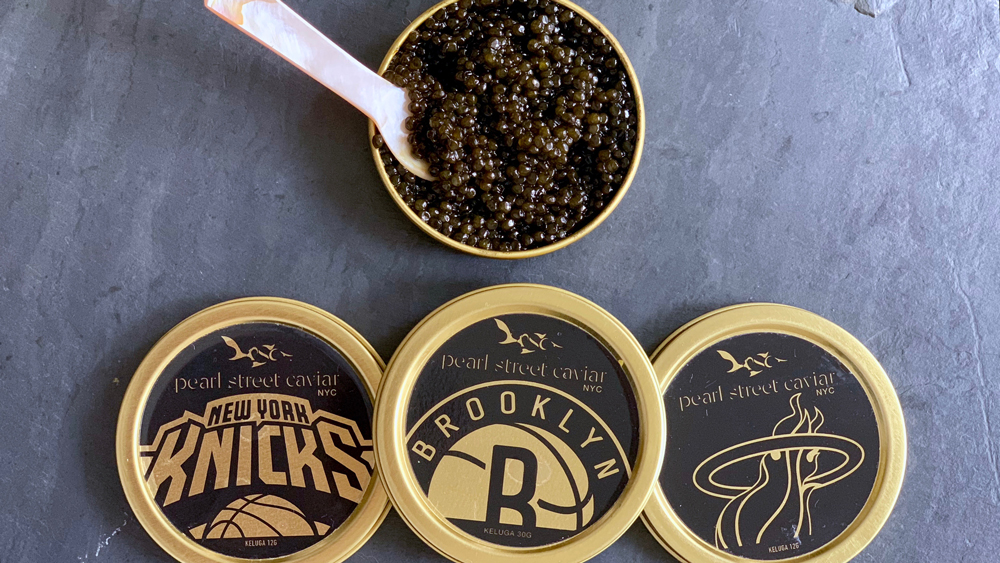 Want a bit of Keluga to go with that LeBron James triple-double? A gram of roe for every Harden free throw? A bit of sturgeon with Stephon?

You can, because the NBA now has its own line of caviar, Food and Wine first reported. It’s a brand partnership between Brooklyn-based Pearl Street Caviar and NBALAB, the league’s “research and development incubator,” which has previously produced such items as skateboards, backpacks, and PopSockets.

Six NBA teams are involved so far: the New York Knicks, Brooklyn Nets, Miami Heat, L.A. Lakers, Golden State Warriors, and Houston Rockets. The team logo-stamped tins are available in two varieties—Keluga (a descendant of the Huso and Schrenkii sturgeon) and the more sumptuous Siberian Select (described by the company as Osetra-like)—and two sizes. 30 grams will set you back $100 for the Siberian Select and $64 for the Keluga; the “slim” 12-gram tins are $44 and $25, respectively.

Caviar produced from farmed sturgeon is better than ever, while a boom in Chinese exports since 2012 has also driven prices down. According to Pearl Street’s Lucy Pollack, the Brooklyn company’s caviar is “sourced from an open-pen aqua farm in the HuaiYu Mountains of China,” then prepared and packaged locally.

Pearl Street’s goal is to make caviar more of an everyday item. The company’s Instagram features caviar with McDonalds, and caviar on avocado toast. Its website touts nutritional value as much as flavor (“more super than most superfoods”), with Pollack going so far as to suggest to Food and Wine that, as part of the NBA partnership, it could also become a pre or post-game training aid, (Hey, it worked for pickle juice, but we’re a little dubious).

As Noma’s Rene Redzepi told us last year, “you can get caviar at every single airport in the world,” so it stands to reason sports arenas would be next.

Not to mention it’s already there, especially in LA. At the sushi restaurant Katsuya (which has a location by the Staples Center), the Lebron-inspired King XXIII roll comes topped with caviar. And In 2011, Ron Artest memorably characterized Lakers fans as having “swag….[O]ur season-ticket holders, they come to the game with Grey Poupon, a slice of bread and some silverware….They’re eating caviar.”