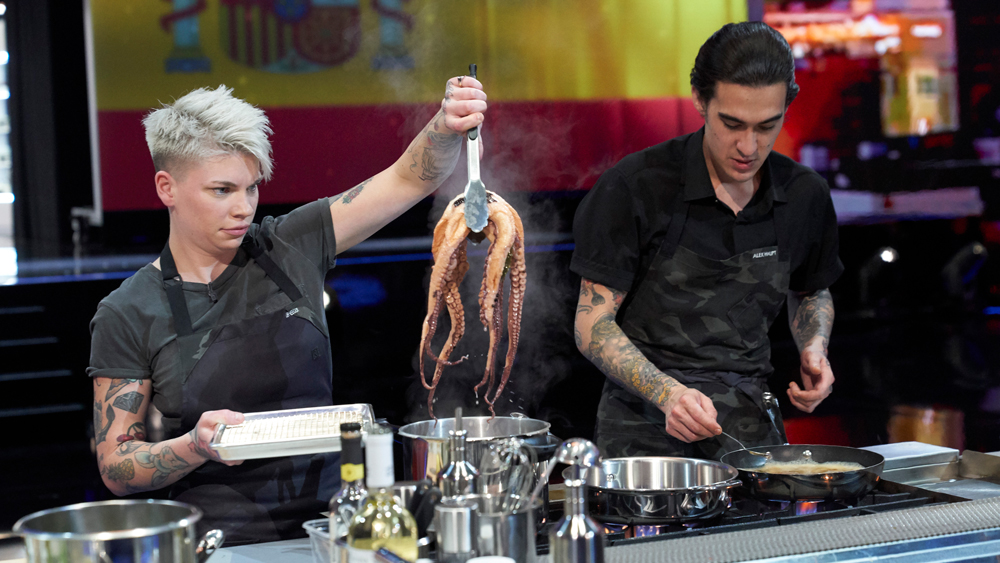 This week is a time for binging, and Netflix is hoping food lovers will still have room after dessert. On November 20, the global streaming service will debut a 10-part cooking series unlike anything it’s ever done. This isn’t the artsiness of Chef’s Table or the joyful instruction of Samin Nosrat’s Salt, Fat, Acid, Heat; Netflix will air a cooking competition show called The Final Table.

The conceit behind the show is in the title, kinda. Presiding over the competition like gods on Olympus are 9 world-renowned chefs including Andoni Anduriz, Grant Achatz, Ann-Sophie Pic, and Clare Smyth. For each episode, a dwindling field of 24 contestants will cook the signature dish of one of the master’s home country. The cooks are competing for the chance to sit among the greats at the final table. Pride is on the line, people.

The format of the competition is like Iron Chef meets Chopped meets Top Chef with the charming former deputy editor of Bon Appetit, Andrew Knowlton, hosting the proceedings. But Knowlton assured us that the show transcends the surface influences. The contestants will be paired in teams of two to start, and have to work together to keep from being eliminated each episode. The competition will be intercut with clips taking you to the homes and kitchens of the contestants. We caught up with Knowlton ahead of the show’s premiere and he gave some pretty great reasons to add the Final Table to your week of bingeing.

Knowlton knows you’re skeptical, because he was too.

“I’ve been on some other network food shows and honestly had become a little bit hesitant with them for the same reason I think a lot of chefs became hesitant with them. I consider myself a pretty serious guy and wanted to put out the right thing. But when I heard it was Netflix, I was like ‘Hell yeah.’ With it being on Netflix I think they were able to get a high level of talent.”

It’s not just trying to create drama for drama’s sake.

“Nobody’s walking away looking like they just got pie thrown at them. There’s no sabotage, that was my big thing, I didn’t want this to be silly. This ushers in a new competition show where it’s not who can be the biggest jerk, or who can be the loudest. It really comes down to the cooking chops and how well you can adapt in that cuisine.”

But you still get to see contestants pushed outside of their comfort zone.

“I took for granted that everyone’s had a taco before, so everyone knows how to make a taco. But the Japanese chef hadn’t had a taco in 30 years. The guy from Scotland had never had a taco. And you’re like, “Wait, what a minute,” and then you’re like, “Oh we live in the U.S. where you can eat 190 countries within a ten-mile radius of this place.” But in Scotland, they’ve never cooked Brazilian food. They don’t even know what Brazilian food is. And that was the crazy thing—putting a Michelin two-star chef to cook a cuisine that he or she has never ever cooked before.”

“These are all talented people but they want to be like these people at the final table. They want to transform food, and not just be a good cook. They want to be a great cook. When you get down to the end, whether it’s the tears or whatever, the fact that they’re being judged by these people that they’ve studied their cookbooks for years. This matters to them. Peer approval is the most important thing to cooks. When Andoni or [Yoshihiro] Narisawa says that you made a great dish, and you get to join the final table, that’s all they really need.”

Foodies and casual fans alike will appreciate it.

“What’s really cool to me is that it can attract the food nerds who want to see how high-level chefs think. This isn’t Joe Schmoe picking a dish apart, it’s Grant Achatz. You get to hear them talk about the nuance of a dish down to details like, ‘Instead of squeezing lime on top of a dish, you gave me a wedge of it on the side—why didn’t you do that for me? What is your intention?” You get to really see why chefs do things they do. But you also end up caring about the people competing because you see what it means to them. This is a smart, educational show, but also it delivers on all those things that make good unscripted TV.”