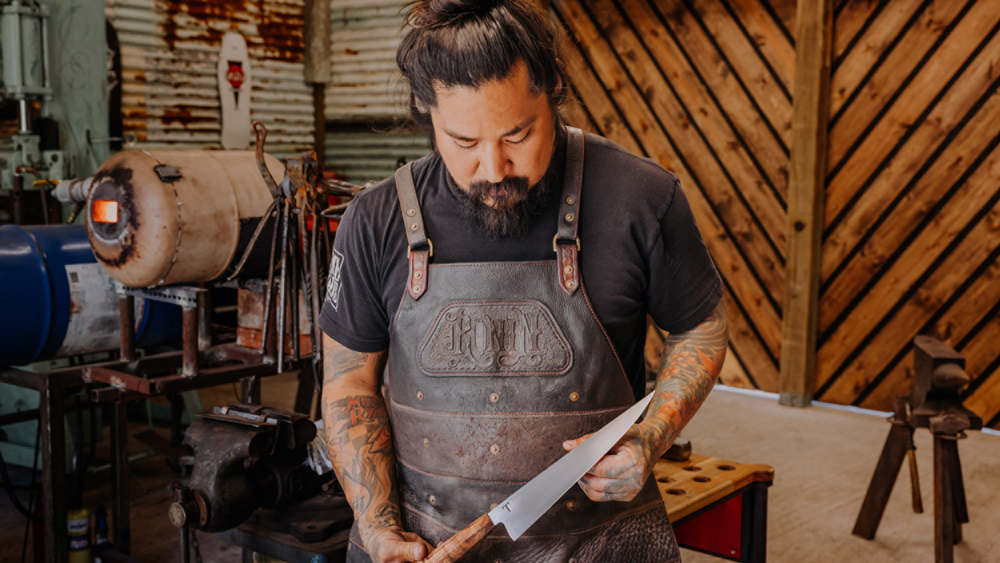 Looking out the open-air veranda off the back of a recycled corrugated metal workshop, I see lush and leafy banana, macadamia and coffee trees—and I know the Pacific Ocean is not far behind this wall of greenery, down below from my mountainside perch. A sudden clanging brings me back to the task at hand: forging a knife. A red-hot piece of steel is being pounded into submission, and soon it will be my turn to give it a whack.

I’m at Neil Kamimura’s blacksmithing workshop, on his off-the-grid farm in Hulualoa, on the Big Island of Hawai’i. The air is easily 10 degrees cooler here than on the coast down below, where I came from, the oceanfront Four Seasons Hualalai, and it’s one of the reasons Kamimura moved his workshop here from downtown Kona a couple years ago. When you’re dealing with up to 2,100-degree forge temperatures, every degree counts.

The Four Seasons Hualalai recently launched a new Only at Hualalai Experiences menu. Guests can sign up for extravagant and unique activities like learning how to free dive with champion diver Kimi Werner; extracting their own sandalwood from a sustainable forest on Mauna Loa and using it for a massage at the spa; and making a chef’s knife with Neil Kamimura. This was how I found myself in the small workshop surrounded by greenery.

The space is decorated with all kinds of recycled metal signs and objects, but there is one, hanging in the center of the upper back wall, that catches the eye, even though it’s the simplest one. Black letters on a white sign, it reads “T. Kamimura Blacksmith Shop,” followed by some numbers and Japanese characters.

Although it’s not the original (which hangs in the Japanese American National Museum), this is a copy of the sign that hung above Kamimura’s great-grandfather’s blacksmith shop in Hilo, between 1930 and 1990. He was the first Japanese immigrant to own a business completely on his own in Hawaii in 1932. The “T” stands for Teiji, which is also Neil’s middle name.

But Kamimura’s father and grandfather did not make blacksmithing the family business, and Kamimura used to work restoring classic cars and as an electrician, among other jobs. But when his mother died right as he was going through a divorce from his first wife in 2016, things came to a head.

“My mom had mental issues like schizophrenia and bipolar, and she was a convicted felon. I was going through my divorce with my middle son Maddix’s mom, who I had been with for 19 years. And my mom was doing pretty good at the time, and she took care of Maddix a lot. She loved him,” says Kamimura. “But then she started doing drugs again and she piled one of my cars, and I was like, ‘You’re not watching my kid by yourself.’ She has always been the main thing in my life; she would try to kill herself like once a month. But when I told her that she couldn’t see Maddix by herself, she lost it. She ended up taking a bunch of Oxy and coke. She wrote me this super long letter, snorted it and she died. When I went to the house and I found the letter and it was the meanest letter anyone could write their kid.”

As Kamimura fell into a deep depression, he was forced to reevaluate his life. One day, a friend told him he found an old forge being thrown away. Given his great-grandfather’s legacy, maybe he wanted it?

“My mom had been dead probably for a week and a half. And he brought it over to my shop and I hooked up a propane tank to it and then we lit it,” he says. The two got their hands on an anvil, a mechanic’s hammer, and some pliers and watched some YouTube videos.

“The moment I hit [the steel], I knew that that’s what I was supposed to do,” he says. “So I was just banging [knives] out like this all day. I was so obsessed, I didn’t even want to go to the barber shop. So I stopped cutting my hair, I stopped shaving my face. I just was in there all the time, like every waking moment.”

Prior to his mother’s death, he was clean-shaven, with short hair. Today, Kamimura has long black hair that he wears in a bun piled on top of his head and a long, bushy beard.

After eight months of self-trained knife forging, his girlfriend at the time submitted him for a spot on the History Channel’s show Forged in Fire, a knife making competition. He was accepted, and he won his episode against three experienced blacksmiths.

Since then, his profile has grown quickly and immensely, with him making knives for everyone from actor Jason Momoa to country music star Zach Brown, as well as lower profile locals like Frank Kramm, co-owner of Kona Butcher Shop. He has a waiting list for his custom knives hundreds of names long (chefs like Philip Tessier, formerly of The French Laundry, are on it) and his website notes that he’s not taking any new orders.

That is, unless you book the Only at Hualalai Experience with the Four Seasons, which costs $12,000—then you get to jump the line. The guest is chauffeured from the resort to Kamimura’s farm. After a tour of the farm, where you can pick and eat any fruits, veggies and nuts you see, you’ll head to the workshop and discuss what kind of culinary knife you’d like to make.

Then, Kamimura pulls out a hunk of raw steel from Japan, cuts it to size, and heats up the forge. The guests can participate as much or as little as they want—in my case, I was happy to use the hydraulic press to flatten the steel to a workable form, and excited to bang away at the hot metal with a sledgehammer on an anvil. But I was more nervous to use the vintage 1,500-pound power hammer that slams down repeatedly as you put your foot on the pedal.

Knife forging is a slow process. You continually have to return the steel to the forge to reheat it, so you can be able to shape it. This means a lot of waiting time between whacks. Thankfully, Kamimura is chatty, and has so many stories, anecdotes and life lessons to share—I learned everything from his hair care routine (lots of conditioner) to how he adopted his oldest son to how he met his current wife, Flora Kamimura, a chef. Guests doing the experience also get to partake in a farm-to-table lunch outside, cooked by Flora.

After forging the knife, a chef at the resort gives you a tutorial.  Four Seasons Hualalei

After forging, Kamimura grinds and polishes the knife to smooth and perfect it, and attaches a custom wooden handle. The knife is typically delivered to the guest a few days later, and the final piece of the experience is a knife skills class with one of the chefs at the resort, using the brand new chef’s knife.

“My dad always told me, ‘You don’t want to be a jack of all trades and a master of none,’” says Kamimura. “This has given me an identity. I make knives: I take a chunk of metal and turn it into a lifelong tool.”