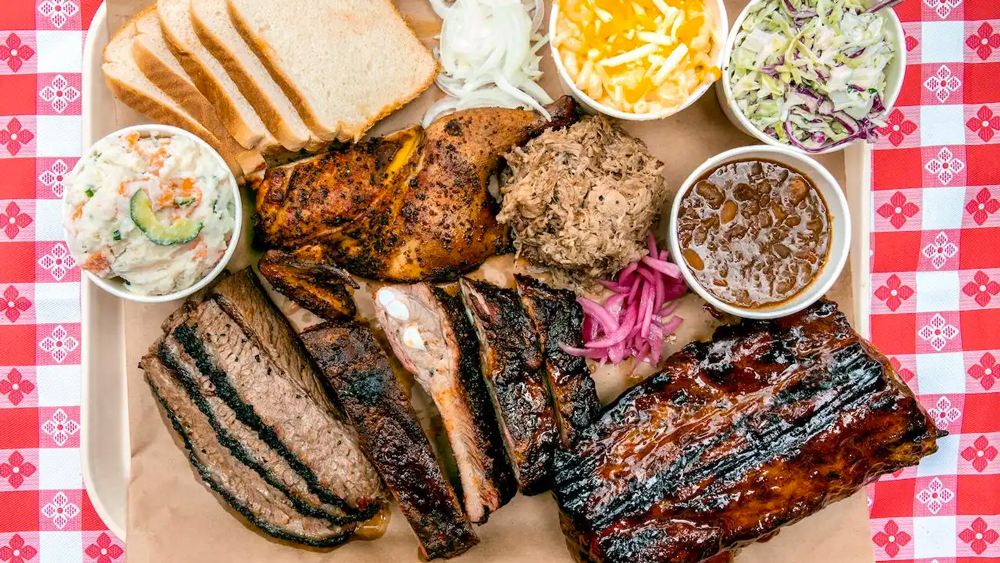 Barbecue can be a solitary pursuit, a passion and a career built around overnight cooking and managing fires when your family and friends are asleep. But pitmaster Daniel Castillo, who will open his Heritage Barbecue restaurant in Orange County’s San Juan Capistrano later this month, knows he’s never actually alone.

It doesn’t matter what time it is. If Castillo needs to ask a question or wants to decompress or joke around, he can text fellow Southern California pitmasters Andrew Muñoz and Burt Bakman.

These new faces of California barbecue are serving Central Texas-style smoked meat while celebrating their own heritage. They’re also using Instagram to inspire the next generation of pitmasters and let people know that the faces of American barbecue can look a lot different than what you might expect.

Castillo, a rockabilly-loving mixed-race Chicano who serves a brisket roulade and bourbon barrel-cured ham, identifies “as more of an outcast than anything else because I kind of grew up more punk rock.” He and his wife, Brenda, have gone from running an underground barbecue operation out of their backyard to a restaurant (on the site of what once was a gas station) with two 1,000-gallon offset smokers along with the 500-gallon trailer pit they used for their pop-ups.

Castillo’s close friends in the barbecue world also started in their backyards and have their own highly specific worldviews. LA’s Andrew Muñoz and his wife, Michelle, put Mexican-American flavors in their Moo’s Craft Barbecue sausages and sides. They’ve recently been experimenting with tacos. LA’s Burt Bakman, who’s known for Trudy’s Underground Barbecue and Slab, wants to open an Israeli restaurant where he combines smoked meat with the flavors of zhoug and hummus he grew up eating.

“Danny, Burt, Michelle and I text all week,” Muñoz said. “Sometimes I’ll be busy, and Michelle is texting with them. I’ll go back and check my phone, and there will be like 200 text messages.”

This is a group of pitmasters who have taken an open-source approach to their craft, unconcerned about protecting intellectual property.

“When you get to a certain point in barbecue, once you learn how to do it well, there’s not a lot of secrets,” Muñoz said. “We bounce things off each other all the time. Our twists are all a little bit different.”

Bakman is happy to send the recipe for his pastrami to people who hit him up on WhatsApp. Muñoz has walked Bakman through his entire sausage-making process. Muñoz let visiting Oakland barbecue star Matt Horn use his smoker and East LA backyard to cook overnight for a pop-up. Castillo has shared wood with Muñoz. Castillo has offered guidance about permits and inspections to Horn, who’s working toward opening his own restaurant this summer.

“If you did this double-blind sample [with California and Texas barbecue], I would suspect most people would not be able to tell the difference,” Lerma said. “California barbecue is as good as it gets.”

Plus, California can take barbecue to new places.

“I think barbecue, just like life, needs a lot more diversity,” Lerma said. “And not because that just sounds great. I think at a certain point salt-and-pepper brisket is boring and you need a lot more inspiration. That’s where a lot of the uniqueness comes out in California barbecue because it’s a marriage of a number of cultural inspirations.”

There are, for example, Black pitmasters like Horn of Oakland’s Horn Barbecue and Brandon McIntosh and Mo Stewart of Long Beach’s Brother’s Keeper BBQ. Castillo has been a regular source of advice for both of these on-the-rise operations.

“Danny and I met at an event where we didn’t really get to hang out, but he told me he was there for anything I needed,” Horn said. “He’s opening his own restaurant. His wife just had a baby. For him to have all this going on and to show me that kind of love and offer his time, that says a lot about who he is.”

California barbecue is about building an inclusive culture. While the biggest players (and some newcomers like LA’s Flatpoint Barbecue) are largely driven by a love for Texas smoked meat, Castillo and his friends also know that life is better when you embrace many different flavors.

Muñoz mentions LA’s The Barbacoa Boyz, which is led by Kansas-born pitmaster Jay Austin and showcases a hybrid of flavors from South America and the American South. Muñoz also recalls a recent encounter he had with Black pitmaster Lonnie Edwards of LA’s Ribtown BBQ. Ribtown started in 2009, several years before Castillo, Muñoz and Bakman started messing around in their backyards. Edwards, who sells sauce-drenched rib tips in a Jefferson Park parking lot, isn’t doing Texas-style barbecue. But he has respect for what’s happening with barbecue in California.

“I had never met him,” Muñoz said. “I walked up, and he was just like, ‘I had been meaning to talk to you.’ We ended up talking for like 30, 40 minutes. So now I have his number. Who knows? In the future, he might be part of our little text circle. The community’s always growing.”