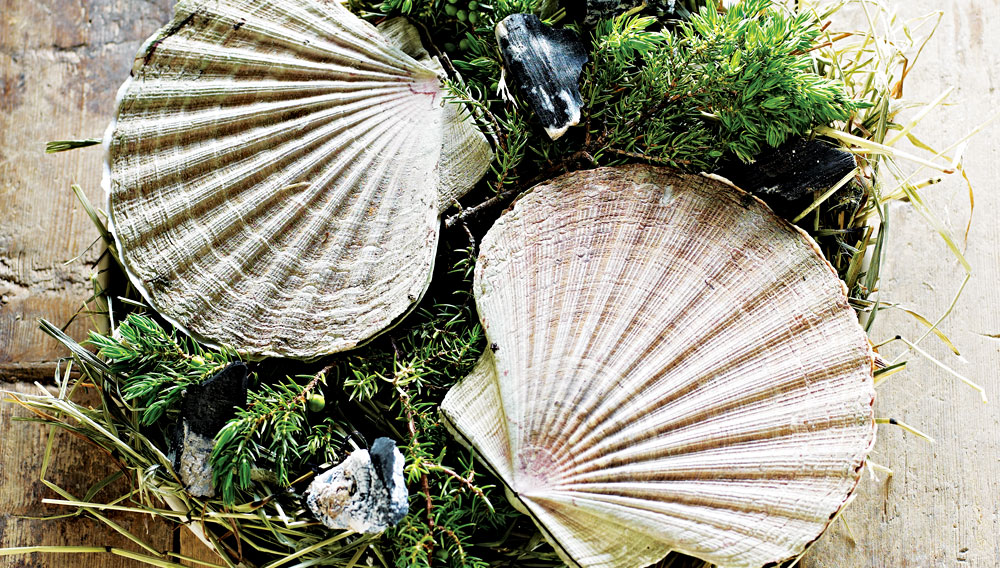 “We have to go see Mr. Duck,” says Magnus Nilsson. I have just arrived in Jämtland, located about halfway up Sweden’s western coast, and have only begun to acquaint myself with this young chef who looks like a Malibu surfer but wears a Russian fur hat and packs a rifle in the back of his truck. I suspect he might be kidding me. There’s a man named Mr. Duck? But no, in this as in almost everything he does, Nilsson is patently sincere. There is a quiet urgency to his voice as he explains that he received a call that morning. “He said to come quickly. He has something for me.”

As we trundle past forests padded thickly with snow, I press Nilsson about this mysterious assignation. Mr. Duck, he explains, raises the domesticated birds the chef serves in his restaurant, Fäviken Magasinet. But he also does a bit of freelance foraging, finding wild herbs and other plants during his woodland excursions, and it is for that reason we are rushing to see him now. We pull up to a ramshackle compound, and Mr. Duck—real name Peter Blombergsson—is waiting in the frigid outdoors, offering warm cups of the birch sap he boiled down that morning. He then proudly extends another cup, which upon inspection appears to contain three tiny pieces of green slime: a rare lichen scraped earlier that day from rocks behind a frozen waterfall. The lichen tastes musty and slightly minty, a flavor Nilsson enthusiastically compares to carrot greens. But back in the truck, the chef admits he is not enamored. “It’s OK,” he says. “But I don’t want to discourage him. We need everything we can get.”

That could well be the motto of today’s Nordic cuisine. The movement began seven years ago, with a young chef named René Redzepi and his small restaurant Noma, in Copenhagen. Just as winemakers talk about the way that soil defines the taste of a wine, Redzepi and his followers emphasize the idea that food should reflect an intense sense of place, which is why they eschew ingredients such as lemons and olive oil in favor of indigenous fish, locally foraged plants, and just about any other edible within close range of their kitchens.

It all sounds so very rustic, but do not conclude that dinner is going to consist of a few weeds and a roasted slab of meat: This is haute cuisine that expresses a startling purity, freshness, and simplicity, with an artistically natural touch. Many of the dishes would not look out of place on a forest floor or washed up onto a northern coast. “New Nordic” has become a global sensation—Noma has garnered two Michelin stars and the top spot on the World’s 50 Best Restaurants list. And chefs throughout the region have lovingly adopted its hyperlocal precepts, though most, it must be said, have relaxed them somewhat.

Magnus Nilsson is different: He is pushing toward a further extreme, unprecedented in the world of haute cuisine. Nilsson gets everything he serves—except for salt, sugar, coffee, and wine—from the surrounding landscape. Just 28 years old, he begins most days canvassing the forests, fields, and lakes that make up Fäviken, the vast private estate where his tiny restaurant is located. Ingredients that are not from the estate—including the plump scallops from a Norwegian fishing town a few hours away and the “good” butter he buys from a farmer down the road—come from within a limited radius. Many mornings, Nilsson’s first bit of mise-en-place is to go out and shoot a grouse or gather a handful of wild mushrooms.

But all the resourcefulness in the world will not overcome nature, and by February—when the lakes are frozen, hunting is banned because of breeding season, and the root cellar’s fruits and vegetables are running low—the chef finds himself with drastically limited options. Instead of frustrated, Nilsson feels liberated by the restrictions. “It’s a spur to creativity,” he says with a sly smile.

It is a bit past noon, and Nilsson is struggling to maneuver a 220-pound quarter of beef from its hook onto a stainless-steel butchering table. “Normally, we age beef for months,” he says as he sharpens a knife. “But we’re running out of things to serve.” This particular animal was chosen from a neighboring farm while it was still alive; he points to the thick white marbling. “Look at that fat,” he says. “That’s where all the flavor is.”

The Fäviken estate is owned by Patrik Brummer, founder of Sweden’s largest hedge fund, who uses the property as a vacation home and hunting lodge. But much of it has been transformed according to Nilsson’s specifications, into a world where he can carry out his exacting vision.

This, after all, is a man who once gave up cooking because he could not find products that suited his standards. After working for three years at L’Astrance with Pascal Barbot, a Parisian chef idolized for his fanatical dedication to the very best produce, Nilsson returned to Sweden, intent on opening his own restaurant. But he was so disappointed with the quality of the vegetables and meat in Stockholm, he abandoned his cooking career and became a sommelier.

In 2008, Brummer hired him in that capacity, and then set to work convincing the chef to tie on his apron again. The persuasion involved allowing Nilsson to convert acres of the estate’s rolling grassland to vegetable gardens and putting in a root cellar. Now, after just two years cooking in a remote corner of the world, with a dining room that seats 12, Nilsson has put Fäviken on the gastronomic map. This year, it made Restaurant magazine’s Top 100 list, and Nilsson is speaking at prestigious chef’s conferences around the world.

IN THE CHEF’S HANDS

All of this—this obsessive attention to geography, to purity of flavor and simplicity of technique—naturally raises the question: Does it add up to a memorable meal?

Indeed, dinner at Fäviken turns out to be one of those magical experiences where the food both surprises and delights, and the meal, enveloped in the warm air of well-being, has us feeling profoundly lucky to be there. It begins in a cozy room where the orange glow seeping from the fireplace reveals walls paneled in ancient wood and hung with the occasional bearskin. The staff of two sets down a snack that proves to be a revelation: a greaseless tuft of flash-fried lichen, whose delicate crispness shatters into nothingness in the mouth. Nilsson comes in to explain the snacks and invite us upstairs to the dining room.

We are led to a different bare room, warmed by candlelight and a sense of excitement. The servers carry trays of warm bread and behind them comes Nilsson, telling another story. “Do you see that trough?” he asks, pointing to a worn wooden vessel leaning against the wall. “That was what my grandmother made bread in. And it’s what we made this bread in as well.” The wood is so impregnated with yeast that Nilsson no longer adds it to the recipe. In other words, he is not just using his grandmother’s bowl—he is using her yeast as well.

And so it goes for 10 courses, not including the duck-egg liqueur at the end. At the start of each, there is Nilsson bearing plates and telling us, in that sincere, insistent voice of his, a story about what is on them. He got in the habit of introducing courses himself because in the beginning, he was the only one in the restaurant. “Someone had to tell people what they were eating,” he says.

On this night, each of us is served one of those perfect scallops from Hitra, still in its shell, coaxed just north of rawness, and with nothing more added than a bit of scallop broth. It tastes slightly of smoke from the coals, but mostly it tastes of sweet, scallopy denseness. On another trip to the dining room, Nilsson carries the femur of the cow he butchered earlier in the day. He saws into it to extract the marrow, which is mixed with the raw heart of the same cow and served as a deliciously rich tartare with toast and barley sprouts.

Then Nilsson presents a dish of cod in a translucent celery root broth. Floating on top is the lichen that Mr. Duck discovered earlier in the day. Transformed from rock slime to herb, it is a bolt of vegetal earthiness against the fish’s trace of metallic flavor. And suddenly the frozen estate around Fäviken seems surprisingly bountiful, if you know where to look.

The idea that food should reflect a deep sense of place has been adopted by chefs throughout Scandinavia and catapulted Nordic food to the forefront of the culinary world. Here are some of the most exciting new restaurants.

Noma The birthplace of New Nordic cuisine, Noma currently holds the top spot on the World’s 50 Best Restaurants list, which means reservations are exceedingly hard to come by. But it’s worth the effort to experience a perfect square of musk ox tartare topped with neat rows of sorrel, or a colorful salad made with ribbons of pickled root vegetables dotted with smoked bone marrow. René Redzepi’s cooking is gorgeous and mind-expanding, lush but light, and the perfect introduction to the Scandinavian palette of flavors. Strandgade 93, Copenhagen, +45.3296.3297, www.noma.dk

Relæ There are clear traces of Christian Puglisi’s years as sous-chef at Noma in the pickled mackerel with lemon-peel puree and the baked Bintje potato with buttermilk and olives, but he has his own idiom, incorporating the products (olives and lemons) of his Italian heritage. Jægersborggade 41, Copenhagen, +45.36.96.66.09, www.restaurant-relae.dk

Geranium Rasmus Kofoed, who won gold at the Bocuse d’Or in 2011, is dedicated to superb produce, avant-garde techniques, and highly refined yet playful dishes, such as the “milk in mysterious ways” dessert. Per Henrik Lings Allé 4, 8, Copenhagen, +45.6996.0020, www.geranium.dk

Frantzén/Lindeberg The two young chefs who give Frantzén/Lindeberg its name aim to run the best restaurant in Sweden, and they just might pull it off. Located in the old part of Stockholm, the restaurant already has two Michelin stars and limits reservations to 30 days in advance. The menu, which changes daily, is Scandinavian in its produce fetish and the pure flavors that compose dishes like lardo-draped monkfish cooked at extremely low temperature or pistachio-crusted pigeon with king crab and vanilla-flavored carrots. Lilla Nygatan 21, Stockholm, +46.8.20.85.80, www.frantzen-lindeberg.com

Matbaren At Matsalen, his two-starred dining room, Mathias Dahlgren creates exquisite still lifes from simple baked potatoes with sour cream. The food is just as delicious, and the environment a good bit livelier, at the casual Matbaren next door. A silky-rich salmon sashimi mixed with blackened reindeer gets its punch from horseradish and soya tapioca. Grand Hôtel Stockholm, Södra Blasieholmshamnen 8, Stockholm, +46.8679.35.84, www.mathiasdahlgren.com

Chez Dominique As its name makes clear, Chez Dominique does not hide its Gallic attachments. In fact, when it opened in 1998, it was a purely French restaurant. But with time, chef Hans Välimäki has worked in a pronounced Nordic element along with avant-garde techniques, transforming, for example, a bœuf persillé into something decidedly unclassic with the addition of pickled onions and coffee powder. His spare, elegant dining room is one of only four Michelin-starred restaurants in Finland. Rikhardinkatu 4, Helsinki, +358.9.612.7393, www.chezdominique.fi