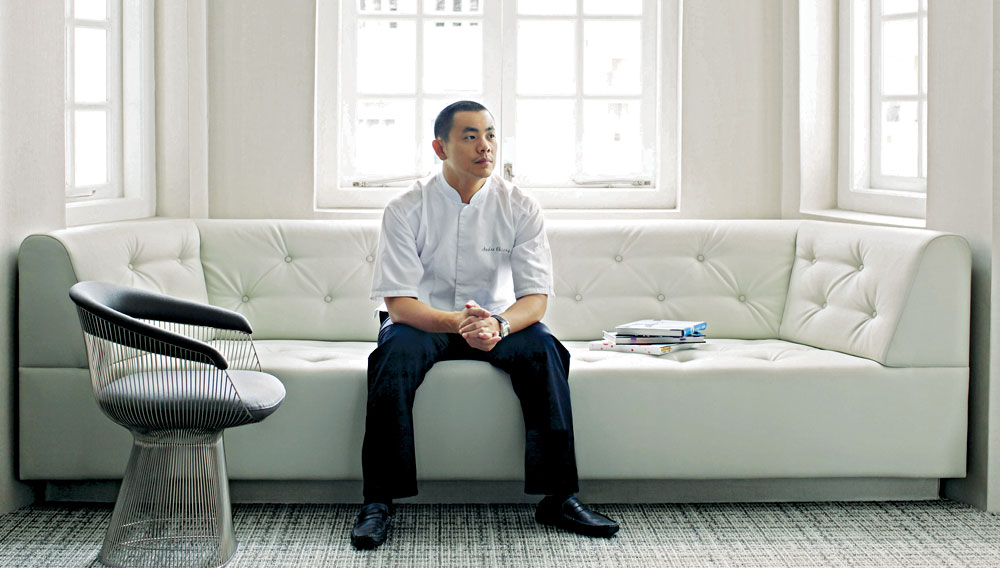 The roads begin twisting and the architecture shrinks as my taxi snakes through the weathered shophouses of Singapore’s Chinatown. The historic neighborhood was almost demolished last decade to make way for more of the skyscrapers that sparkle in the distance on all sides. But these colorful remnants of a colonial past survived, and now they contain the city’s trendiest independent restaurants and designer boutiques, standing shoulder to shoulder with outdoor food courts that scent the air with curry and charred banana leaves. The taxi pulls up to Restaurant André, 41 Bukit Pasoh Road, a heritage house whose pristine white walls, blue door, and ancient olive tree set it apart from its neighbors.

I step through the door, and the chaos of the city fades behind me. Chef André Chiang’s restaurant accommodates no more than 30 diners a night, and at 8:30 pm, it looks as if I am one of the last to arrive. The mood is hushed but jovial. A Champagne cork pops. I detect the aromas of freshly baked baguettes and black truffles. A trio of waiters swooshes by, carrying what looks like dessert—some sort of tuile, perhaps?

Soon enough, a platter lands on my table, laden with a highly elaborate amuse-bouche of lacy crackers crafted from mushrooms, dusted in snowflakes of Parmesan cheese, and served alongside a 6-inch razor clam whose shell has been polished to a sheen. At the razor’s tip is a thimble-sized portion of clam tartare and a tiny crisp of chicken skin seasoned with South Asian masala spices. Singapore’s outdoor cooking stalls flash across my mind. On the plate next to the clam is a single piece of popcorn that tastes like … ah, yes, vanilla. In a single shotgun blast, Chiang has delivered a century’s worth of flavors that span the divide between Asia’s historic spice routes and the ultramodern kitchens of France.

This creative style of cooking is making Singapore the most innovative, food-obsessed city in Asia—and one of the most exciting restaurant cities in the world. Its young chefs are traveling and cooking with the best, then returning here and respecting their roots. Chiang, who is of Taiwanese descent, spent 15 years working with the most prestigious chefs in France—Pierre Gagnaire, Joël Robuchon, Michel Troisgros, Jacques and Laurent Pourcel, Pascal Barbot—before returning to Asia to open a place of his own last fall. Already, Chiang’s establishment operates at a level that places it on equal footing with his mentors’ restaurants.

Singapore’s dining scene, like the city itself, is a melting pot, influenced as much by the West as by the East. The island covers a mere 265 square miles, and its agricultural industry all but vanished with the demise of the opium trade. Though most of its cooks rave about the local birds—chickens of American and Japanese origins, plus guinea fowl, squab, and quail, are the only farm products raised in the country—they have always had to import and adapt the foods of other nations. In the early days, this meant borrowing from neighbors in Southeast Asia, China, and Japan; more recently, however, Singapore’s chefs have looked to Western Europe, the United States, and Australia for inspiration.

Outsiders tend to hear about the wave of global culinary celebrities who have recently opened satellites here: Wolfgang Puck, Guy Savoy, Mario Batali, and Robuchon. But these chefs have merely leveraged a prospering food scene that had already taken hold. The out-of-towners flock to Singapore because it is a place where innovation has boomed along with the economy, which is among the world’s fastest growing. At André—and at other restaurants, such as FiftyThree, Waku Ghin, the Tippling Club, and Iggy’s—the average price for dinner with wine easily exceeds $300 per person. And reservations are gobbled up weeks in advance.

Restaurant André is easily one of the world’s greatest modern restaurants. The staff has calibrated the entire experience—the implausible grace, the impeccable timing, the delicate jazz, the whispered joviality—to a degree of perfection that generally requires years of rehearsal to achieve. Most major cities have one or perhaps two restaurants operating at such a level. But Singapore has several, and the number keeps growing.

Singaporeans are fiercely competitive, and the chef giving Chiang the tightest run for his money is Michael Han, whose FiftyThree channels the Scandinavian spirit of Copenhagen’s Noma, the famous restaurant where he trained. But, tasted within the confines of a 100-year-old Peranakan shophouse, Han’s cuisine—and indeed the complete dining experience—assumes a uniquely Singaporean character.

FiftyThree is located on Armenian Street, one of the oldest lanes in Singapore, in an area that was founded by a rich opium farmer long before the Opium Wars. I am seated at one of only six tables that grace the minimalist dining room, which might once have been an opium den. The bread basket is a burlap sack with two separate compartments: The top pocket is filled with freshly baked buckwheat rolls, the bottom with heated cherry stones to keep the bread warm. In a nod to the chef’s native Singapore, the first amuse-bouche is a free-form tapioca shrimp cracker, served with a carrot emulsion and walnut shavings. Like Chiang, Han serves only tasting menus—nothing à la carte—with delicately arranged compositions that might include a scallop paired with fried chicken “oysters,” hairy watercress and soy powder, or crisp pork belly with foraged micro-herbs and flowers.

Han and Chiang both pay tribute to their European training, but they certainly were not the first in Singapore to rise to celebrity status by doing so. Justin Quek was a founding chef in 1994 at Les Amis, the country’s original paean to French haute cuisine. When the new mega-resort and casino known as Marina Bay Sands opened last year, Quek was the only Singaporean chef invited to go head-to-head with the likes of Tetsuya Wakuda, Puck, Savoy, and Batali. Those famous out-of-towners were given good locations within the casino and adjoining mall, but Quek’s Sky on 57 received the hotel’s most prized position: the marquee spot atop the 57-story tower’s rooftop SkyPark, which features a wraparound terrace and an almost 360-degree view.

Quek pulls as much from his French training as from his own heritage. Delicate xiaolongbao (soup dumplings) filled with a kind of foie gras–truffle consommé take their place on the menu beside kingfish ceviche with Kaffir lime, a frothy mushroom cappuccino, shark-cartilage velouté with prawn dumplings, and steamed king crab with a laksa emulsion. While Sky on 57 has too festive an atmosphere to achieve the elegance of André or FiftyThree, it should not be missed.

Another of Singapore’s original celebrity chefs is Sam Leong, who rose to acclaim by modernizing Chinese cuisine at Jade and My Humble House. He recently left the restaurant business to open a cooking school with his wife. But My Humble House, now with chef David Liew at the helm, continues to set the bar high.

Here, I dip my spoon into a coconut shell to retrieve sips of an exquisite Sakura chicken consommé with double-boiled black dates and snow-lotus seeds. I also discover lovely, springy noodles made not from rice or wheat flour but from delicate fish paste, then wok-fried with prawns and spicy XO sauce and served on Rosenthal china.

Chinese influences also dominate the menu at Cassia, located inside the Capella resort, Singapore’s most expensive hotel. The resort occupies the officers’ barracks of a 19th-century colonial British naval base overlooking the South China Sea. On the second-floor terrace, ceiling fans twirl in slow motion and palm trees rustle in the breeze. Chef Lee Hiu Ngai draws inspiration from the area’s former spice trade and the seas surrounding Singapore. He steams lobsters in Shaoxing rice wine and ginseng and crafts immaculate Cantonese dim sum, which accompanies poached wagyu beef and pan-fried foie gras on the menu. Lunch at Cassia can easily last three hours—not a minute too long.

FROM PAST TO FUTURE

The molecular-gastronomy trend has not passed Singapore by. In fact, it is difficult to think of another city outside of Spain where “modernist cuisine” has staked such a claim. The first place to herald the joys of liquid nitrogen, centrifuges, and spherification was Iggy’s, which operated for several years at the Four Seasons’ Regent Singapore hotel before relocating in 2010 to a serene, windowless basement in the Hilton, just around the corner. Diners, however, should not be deterred by the Hilton association; Iggy’s continues to be one of the most talked-about restaurants in the city, and has possibly the best pastry chef in town, Andres Lara, who is originally from Chicago.

But if Iggy’s was the first eatery in Singapore to embrace all things molecular, it has more recently been eclipsed by the Tippling Club, a lively kitchen and cocktail lounge located in a blissfully secluded greenhouse tucked away within the lush, parklike setting of Dempsey Hill. The bar resembles a science lab: Here, vapor overflows from beakers and ice cubes are never just ice cubes. Sometimes, drinks are not really drinks at all, but inconceivable compositions of gels, foams, fruits, and edible sand. When it comes time to eat, be prepared to suck vichyssoise through tubes and to be pleasantly surprised by the taste of “styrofoam” (white truffle oil that has been treated with who knows what). Head chef Ryan Clift and former head bartender Matthew Bax were lured to Singapore in 2008 from Melbourne, where they were just beginning to make names for themselves. In Singapore, they became heroes.

In fact, the only imported celebrity chef who is truly doing something unique is Sydney’s Tetsuya Wakuda, who has opened Waku Ghin, a Japanese grill like no other. Waku Ghin offers a perfect and original hybrid of kaiseki and teppan­yaki in the form of a formal 10-course degustation finished off with a ceremonial cup of gyokuro tea. Waku Ghin allows only about 25 guests for each seating at its private grills, where each party enjoys the lavish attention of a dedicated chef who very minimally manipulates such delicacies as abalone, king crab, sea urchin, and wagyu beef. These dishes are paired brilliantly with wines from France, Austria, the Barossa Valley, and New Zealand.

Surprisingly, Sydney-based Wakuda has promised his Singapore staff that he will travel there regularly to tend to Waku Ghin, a restaurant that is completely different from anything else he has done. Though skeptics may expect him to eventually become yet another absentee celebrity chef, others believe that he has legitimately committed himself to Asia for the long haul. After all, where else but Singapore can a chef be immersed in such a richly creative culinary environment? And, perhaps more to the point, where else can a master of cuisine find an audience so readily capable of appreciating—and affording—such a refined level of edible art?