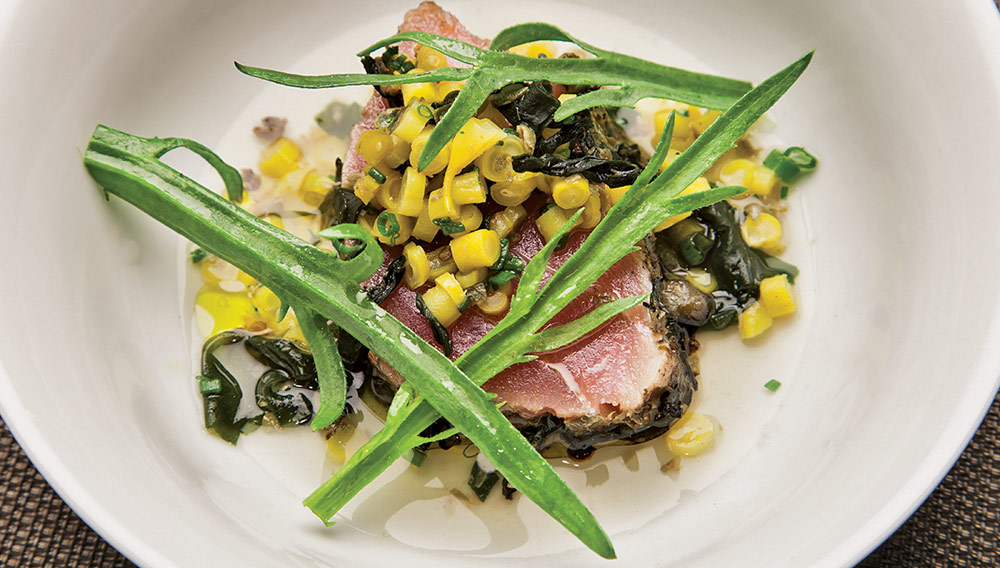 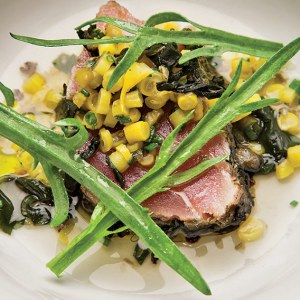 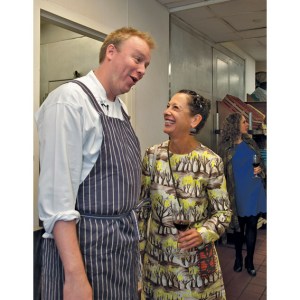 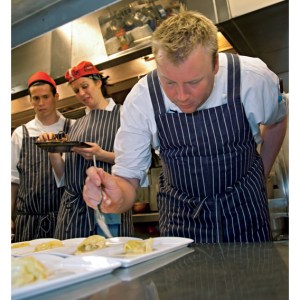 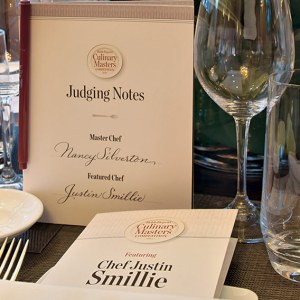 The Event It was most likely the first open fire built in the Ritz-Carlton’s kitchen. With a wide grin, Smillie stuffed handfuls of hay into a small yakitori grill. Flames shot upward, his kitchen crew cheered, and Smillie began searing slabs of tuna for a first course of smoked tuna with grilled pole beans. The delicate dish is based on a homey Italian classic, tonno e fagioli. But Smillie’s tuna had marinated in wakame, capers, and coriander, and he learned the hay technique on a trip to Japan. “Just because something is simple,” he said, “doesn’t mean you haven’t built flavors into it.”

Smillie is famous for rustic cooking with rough edges and big flavors. His mantra—“make it ugly”—is his way of saying that there is beauty in nature, and that presentations should not be fussed over. But do not be fooled: Every course on his competition menu had a smart, chefly twist that amped up the flavors and textures. His gnocchi, for example, were not boiled; they were pan-fried in butter and olive oil. “They start to puff, and get nutty, crunchy, and light,” he said. His quail, grilled and served with cabbage and farro, was prepared with a green-tea rub and hung for two days before it was cooked. To the dismay of some judges, he served the quail with the foot on. (“Count yourself lucky I took the head off,” he quipped.) His foie gras, sliced thin and served on filone bread, had a surprising enhancement: a touch of bitter Fernet Branca. Smillie’s tour de force, however, was his slow-roasted short ribs, a preparation that requires brining, roasting, and searing to create an intensely beefy crust and melting interior. “Every once in a while I eat something and I think, damn, why didn’t I come up with that?” Nancy Silverton said. “I am very jealous of that dish.”

The Event Years ago, when Ishii was the chef at the Japanese embassies in Geneva and New York, he was inspired to write a poem about the sense of peace and connection that food can create. In the months before his competition dinner, he carved those words into a wood block and then pressed 70 prints of the poem onto thick pieces of parchment, which he used to decorate his transcendent second course: Usuzukuri of Fluke with Chirizu, a deceptively simple plate of sashimi served with a savory dipping sauce made from yuzu, daikon, chives, seaweed, Japanese chilies, and soy sauce. The fluke had been delivered live that morning to the hotel’s kitchen, where Ishii cut the notoriously unyielding flesh into strips as translucent as frosted glass and as soft as silk. Even Morimoto was awed by the young sushi master. “I don’t know why he chose to do this,” Morimoto said of the fluke course. “It takes a sharp knife and sharp skill. For 60 people, it is unheard of!”

Ishii’s entire menu demonstrated similar skill and subtlety. His Kaiyose-nuta, a beautiful arrangement of seafood, showcased such techniques as poaching abalone in sake for seven hours to achieve the perfect texture and serving botan ebi raw to emphasize the shrimp’s natural sweetness. “Lots of people will look at this dish just as shellfish,” Ishii said, “but every element in it is different. Everything is cooked the best way I thought it could be.” For another course, he seared two magnificently marbled loins of Japanese A5 wagyu beef—the highest and tenderest grade—and layered them with deep umami flavors: mushroom rice, mushroom puree, and veal demi-glace accented with soy sauce.

At his restaurant in London, an unusually serene setting, Ishii creates intricate meals in the Japanese kaiseki tradition, which requires that every element be under his control. He sources all of his ingredients—including catching some of the fish—and serves his culinary creations on hand-thrown pottery that he makes. Re-creating the Umu experience some 5,000 miles away on a chic private terrace overlooking Rodeo Drive was no easy feat, but Ishii did just that. “A knife is all I brought,” he said, pointing to his Japanese Aritsugu and Nenohi blades, “and this poem.”

The Event As Mendes briefed the serving staff on his modern Portuguese menu, a waiter posed a question: What about diners who do not eat garlic? “If they are allergic to garlic,” Mendes said, “I’m sorry, just show them to the door.” Mendes is famously true to his roots, and his competition menu was no exception. “It’s all Portugal—straight off the boat, the stuff I grew up eating,” said the chef, who quickly returned to the kitchen. While the other nominees brought cooks from their restaurants to execute their competition menus, Mendes arrived at the venue alone and had hours to train a crew of mostly culinary students and instructors from the center’s cooking school. He explained his Shrimp Alhinho, a traditional (and garlicky) dish refined with a potent sauce made from shrimp heads and deglazed with brandy and Pernod. For another dish, Mendes cured his own bacalhau (salted cod) and tenderly cut the fish into pure white blocks to be served with smoked baby beets, burned-bread purée, and a petal of tomato confit. The centerpiece of his menu, Arroz de Pato (duck rice), was broken down into its many components, ready to be assembled: confit legs, crisped duck skin, sous vide breast meat, and a fragrant base of Sollana rice, rich with smoky pimentón, black olives, and chorizo.

Moments before the dinner began, Boulud entered the kitchen, looked at Mendes, and declared, “Oh, he’s already sweating. Good!” The rapport between the two chefs is deep, and after the Shrimp Alhinho was served, Boulud stood and made another declaration: “This is so Portuguese, so George, so refined . . . the soul of your grandmother is in this dish.”

The Event Stupak’s restaurants are among the most innovative in New York City, and the chef seems to never stop intellectualizing his work: modern Mexican cuisine that is at once rustic and cerebral, tightly based on classics and yet thoroughly original. His competition menu impressed with dishes such as one called Roasted Carrots, which is built on mole poblano, the traditional Mexican sauce that requires three days and 29 ingredients to make. Instead of serving the sauce in a puddle, Stupak painted it on the inside of a bowl to create a wood-grain effect. In place of chicken, he roasted tiny carrots in mole and arranged them in the bowl like a still life with watercress, sesame seeds, yogurt enriched with brown butter, and “tuiles” that shattered into intense mole flavor and recalled Stupak’s background as a pastry chef at Alinea in Chicago and WD50 in New York City.

His lobster course was jolted to life with sweet corn esquites, a version of the classic Mexican corn dish with arbol chilies, lime, Cotija cheese, and epazote. His carne asada, made with Japanese wagyu beef, was dressed in a salsa roja rich with bone marrow. Even his three canapés were cause for meditation. One juiced up Vongerichten’s famous crab-mango salad with lime and spices. Another transformed Oaxacan barbacoa, in which lamb is roasted with red-chili puree and avocado leaves, into a hauntingly delicious lamb tartare spiced with pasilla chilies, guajes (the licorice-flavored seeds of the acacia tree), and avocado leaf. The third elevated guacamole by adding pistachio oil and chopped pistachios. “I was very anti-guacamole for a while,” Stupak says. “But now I use it as a way to get you in the mood for Mexican flavors.”

No So Fast: The Central Park Boathouse Might Be Saved After All