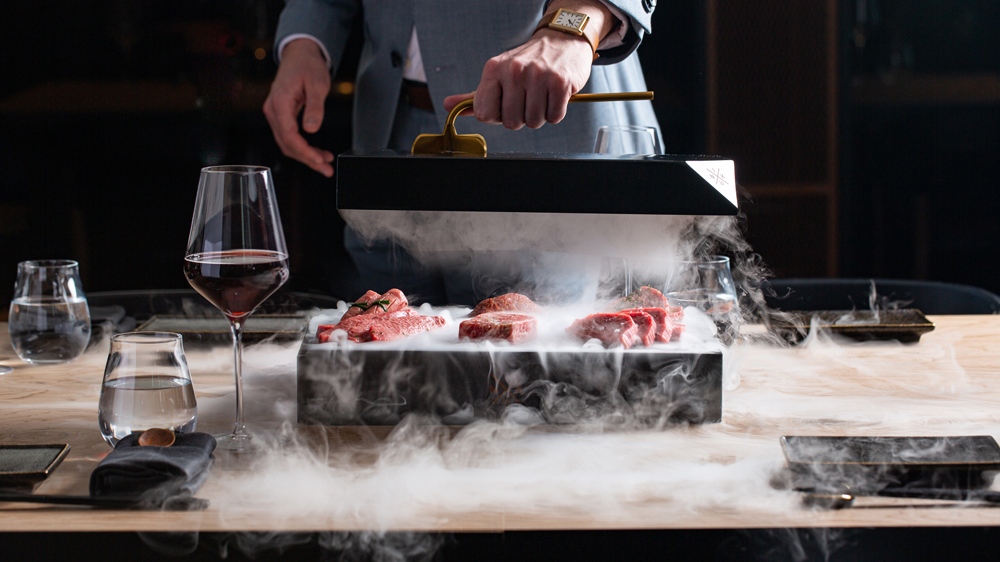 Located at Downtown LA’s gleaming Wilshire Grand Center complex, the newest spot from the rapidly expanding Chubby Cattle restaurant group makes a spectacle of cooking beef on tabletop robatayaki grills. Its yakiniku tasting menu includes a box, billowing with smoke above six different cuts of Wagyu. The smoke clouds intensify when a staff member opens the enclosure. It’s a literal smoke show at a glamorous restaurant that’s already been Instagrammed by globetrotting DJs like Charly Jordan and Zedd (Chubby Cattle was born in Vegas, where dinner is often a spectacle and where both these DJs are headliners). But the real point of this box is to showcase the difference between the domestic and international Wagyu that’s inside it.

Thompson serves cuts like Masami Ranch beef tongue from Northern California, Toriyama tenderloin from Japan and Stone Axe top sirloin cap from Australia. The domestic Wagyu, he explains, is almost always “a cross-breed with a very beefy flavor like you would expect in American beef.” The Japanese beef has less of that beefy flavor and is more about the marbling and texture. The Australian Wagyu is like a “hybrid of both of those.” Plus, Niku X is dry-aging beef on-site to enhance the flavors.

The grilled meat at your table is accompanied by Girl & Dug Farm ice plants and a salad of Girl & Dug produce.

“It’s almost like a palate cleanser and something to reduce the richness between bites,” Thompson says.

Life, after all, is about balance.

Thompson, whose mother is Japanese, was born in Hawaii but spent his early childhood in Japan after moving there when he was a year old. “Japanese was my first language, my first culture, my first real food memories,” he says. But the food he is cooking now, he stresses, is not traditionally Japanese. His father worked for United Airlines, and Thompson remembers traveling the world as a child.

“I kind of got to view the world from a different lens than most kids,” he says. “My dad would take me out of school routinely just to travel. He would tell my teachers, ‘He’s going to learn a lot more with me than he’s learning with you.’ And the teachers hated that. But the reason I got into food is because of traveling extensively. My parents were both really into different cultures and different foods.”

This led to Thompson going to culinary school and then becoming a Chicago underground dining sensation almost two decades ago, well before the era of pop-ups powered by social media.

“I would cook wherever anyone would let me, whether it was an art gallery or someone’s apartment,” he says.

These dinners were the beginning of what became an actual brick-and-mortar Chicago restaurant, Bonsoirée, which earned a Michelin star for its tasting menus that merged classic European cooking with American and Asian influences.

Thompson’s entire life has been about blending cultures. So Niku X is a Japanese grilled-meat restaurant, but it’s also a lot more than that.

Chubby Cattle also has restaurants, The X Pot and Wagyu House, that specialize in Chinese hot pot with high-end ingredients, flair and smoke shows. Niku X is raising the stakes with dry-aged fish from The Joint (which also arrives in a smoke-filled box) and an Astrea caviar course with Stone Axe Wagyu tartare, Hokkaido uni and gold leaf. Deeply marbled Miyazaki A5 rib eye shows up in a donabe. There’s also a miniature grilled foie gras and tenderloin sando with blueberry gastrique on the yakiniku tasting menu.

“What I really want to do with my yakiniku menu is something different than the traditional Japanese yakiniku menus,” Thompson says. “There’s several of them in Los Angeles, and they’re good. But I just want to do something more creative, more interesting. That’s something I’m going to be working on in the coming months.”

For example, he’s tried out a caviar course with a blini made from the same grains that are fed to Masami Ranch cattle. He’ll keep exploring ideas for everything from caviar presentations to how he weaves in seasonal ingredients. He’s using Girl & Dug produce for the pickles at Niku X, too.

“There are a lot more options than what I could get in Chicago,” Thompson says. “In Chicago, you’re cooking root vegetables seven months out of the year. But at the same time, it kind of forces you to be a better chef. You have to use what’s available, and that creativity really comes out when you’re limited. In a sense, it was good training before I came to LA, where everything is readily available.”

Beyond the yakiniku menu, Niku X has a tasting menu with a full-blood Masami Ranch tomahawk that involves lighting whisky on fire at the table. Then Thompson takes part of the trim from the steak and makes dry-aged Wagyu fried rice.

“Sometimes, people are wary about these theatrical presentations because it takes away from the actual food,” he says. “My intention is to add to the experience. It’s great for people who love to pull out their cameras and do the social media and share these photos with their friends. We want people to have fun and to love the food and the experience.”